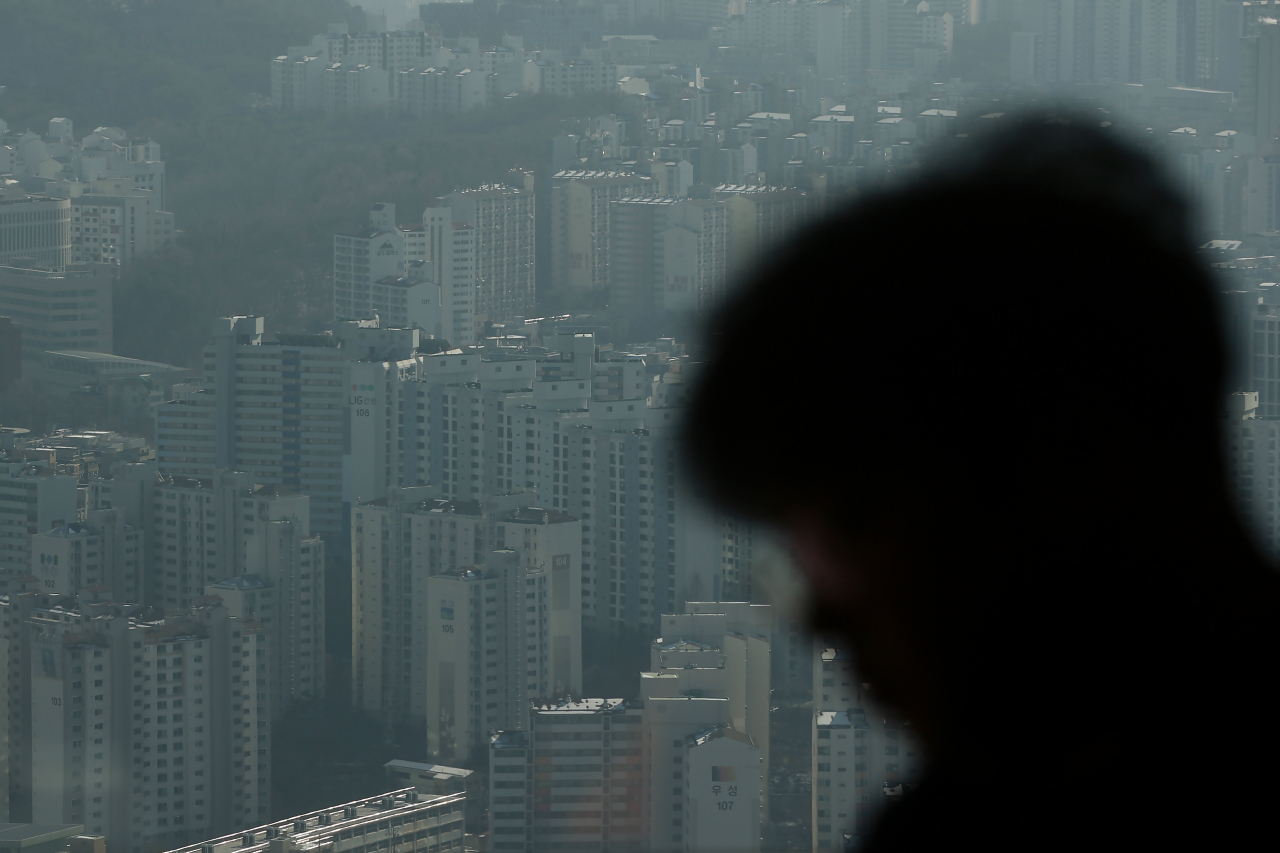 View of Seoul from 63 Square in Yeouido, western Seoul on Dec. 30. (Yonhap)

With the Bank of Korea set to hold the first rate-setting meeting of the year Friday, the market is expecting it to raise the base interest rate 25 basis points to 3.5 percent.

In the latest Monetary Policy Committee meeting held in November, the Bank of Korea raised its benchmark interest rate by 25 basis points, signaling a slowdown in its rate hikes following a twofold raise of 50 basis points.

It is likely that the bank will announce another interest rate hike as inflation is yet to be tamed. Though the consumer price index fell slightly to the 5 percent range after reaching its peak at 6.3 percent in July, it still exceeds the 2 percent target set by the central bank.

With the prices of gas, electricity, and public transportation set to increase, there's no immediate end to inflation in sight.

"Price, the most important (factor) for the public, is likely to continue to show an upward trend, surpassing the bank’s target range," Bank of Korea Gov. Rhee Chang-yong said, expressing skepticism on the market outlook. "Monetary policy should be maintained, (prioritizing) price stability."

Rhee’s comments align with the summary from the last Monetary Policy Committee meeting held in end-November which read, "The stance of rate hikes should be maintained for the time being.”

The US Federal Reserve's rate hikes also signal an inevitable raise for Korea as the gap could lead to capital outflow and Korean won losing value against US dollar.

The Federal Open Market Committee transcript summary released Wednesday said, “Participants generally observed that a restrictive policy stance would need to be maintained until the incoming data provided confidence that inflation was on a sustained downward path to 2 percent, which was likely to take some time.”

With the FOMC continuing its hikes, the interest rate differential involving Korea and the US stands at 1.25 percentage points.

As the next FOMC meeting is set to be held Jan. 31-Feb.1, the Monetary Policy Committee will have to decide on the base rate for Korea without knowing the Fed’s exact stance.

Another point of contention lies in whether the interest rate hike Friday will be the last one for the time being or not.

Though the terminal rate for Korea was projected to be at 3.5 percent at end-2022, the base rate will hit the figure if the committee decides on a 25 basis point raise Friday.

“Though the consensus for the terminal rate stands at 3.5 percent, the figure may go up,” Lim Jae-kyun, an analyst from KB Securities, said. “The BOK governor said the final terminal rate was the one suggested in November, which may change under circumstances.”

“The Bank of Korea will focus on maintaining balance as its goals of growth rate, inflation and financial stability are contradicting each other,” BNP Paribas said through a report, adding Korea’s terminal rate will reach 3.75 percent in the first half of 2023.

Others say that this could be the last rate hike for this year given that the economic indicators are improving.

“This will be the last rate hike, given Rhee's comments in November about how Korea does not have to mechanically follow the Fed's stance," said Kang Seung-won, an analyst at NH Investment & Securities.

“But the meeting will leave room for further rate hikes through its transcript and press conference to prevent herd market behavior and expected inflation,” Kang said.