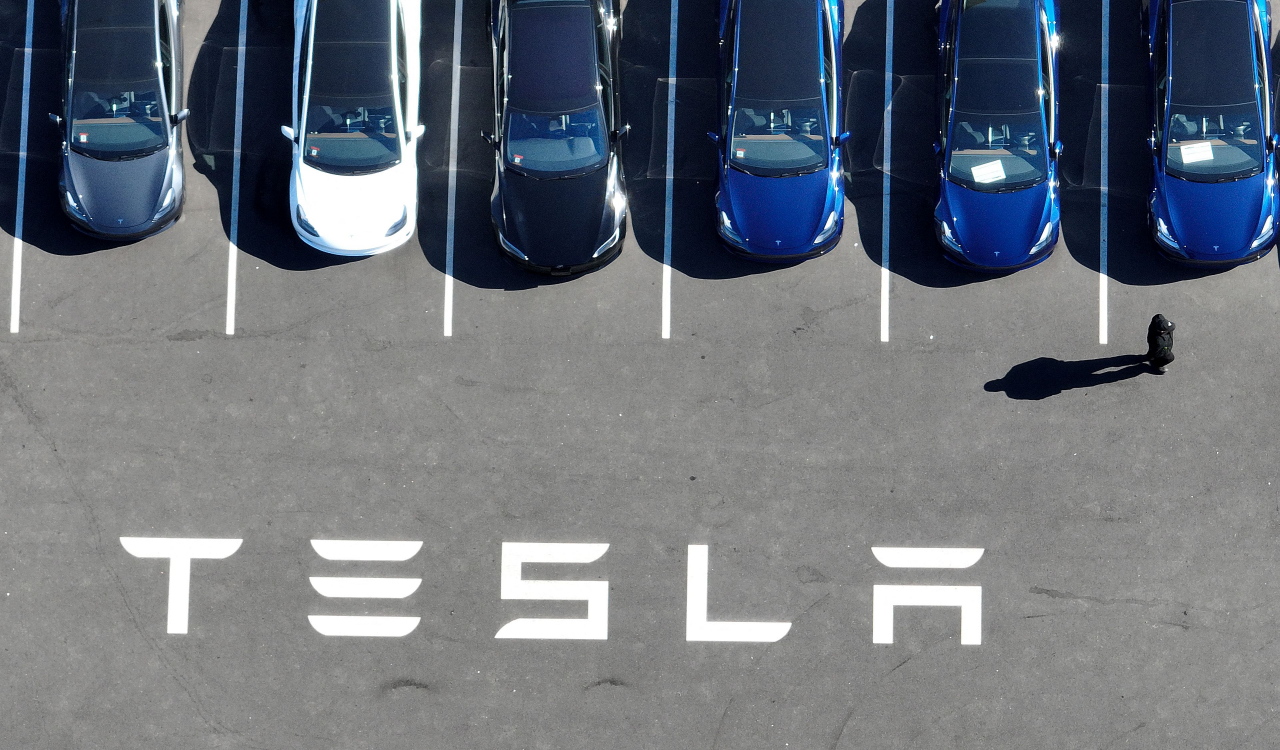 In this file photo taken on Oct. 19, brand new Tesla cars sit in a parking lot at the Tesla factory in Fremont, California. (AFP-Yonhap)

All eyes are on whether the fourth-largest economy in Asia could outdo other regional candidates such as Japan and Indonesia, which have richer EV consumer bases than Korea.

On Wednesday, President Yoon Suk-yeol asked Musk to invest in Korea in his presentation to the Tesla chief executive officer about Korea's automotive industry landscape and investment climate, as Musk ponders a new Asian site in addition to a Shanghai location. Yoon also pledged to ease "unreasonable regulations" imposed on foreign companies to keep pace with global standards during the call.

The 51-year-old tycoon was quoted as saying by Yoon's office that Korea is one of the top candidates for a second manufacturing base in Asia, and he was interested in strengthening Korea's electric vehicle charging capability through infrastructure investments.

Musk also vowed to spend over $10 billion in 2023 to buy components made in Korea in the field of autonomous driving and artificial intelligence.

This comes as Tesla is in search of a new site in Asia for what it calls a "gigafactory" for EV manufacturing by as early as the first quarter of next year. Tesla is the world's largest EV maker by all-electric car registrations and the runner-up in plug-in type car sales in the first three quarters of 2022.

Korea, meanwhile, is home to LG Energy Solution, the world's second-largest EV battery maker and one of the suppliers for Tesla.

Additionally, the Korean industry ecosystem is brimming with companies dedicated to a range of auto components, such as lightweight car chassis that underwent the hot stamping process, thermal management systems, aluminum wheels, tires and pedals, as well as materials used for batteries, telecommunication systems and flat-panel screens, among many others.

This puts Korea on a level playing field in the competition to attract Tesla's new factory, apparently designed to address Asian demand for Tesla products outside China, although Korea's automotive market is about a third of neighboring Japan in size, an analyst noted.

"Japan has a huge automotive market that sells about 5 million cars every year. But Korea might give (the new factory) easier access to auto components, whereas an Indonesian location might allow Tesla to stabilize raw material supply and bring the Southeast Asian market within reach," said Song Sun-jae, an analyst at Hana Securities.

Tesla has long been arguably the biggest name in electric vehicles with Koreans. Tesla reached the 30,000-unit milestone after four years in terms of sales here in January. Tesla has also been considered one of the favorite picks among Korean institutional investors. The National Pension Service disclosed earlier this week that it had purchased $192.76 million of Tesla stock in the third quarter, raising its stock holdings to nearly $1 billion.

Tesla's popularity among car fans, on the other hand, has recently been on the wane. Tesla faces fierce competition in the Korean market as more consumers turn to other EVs at home and abroad, while it has also suffered supply chain disruptions globally.

Tesla sold 13,032 electric vehicles from January to September, down 20 percent from the previous year, according to data jointly provided by market tracker CarIsYou and the Korea Automobile Importers and Distributors Association. The decline of Tesla's sales was steeper than the average of foreign brands, at 7.4 percent.

Both models were overwhelmed by the flagship EV models from Hyundai Motor and Kia. During the same period, Hyundai Motor's Ioniq 5 registered 21,876 cars sold, while Kia sold 18,877 units of its EV6.

Tesla has run its only factory in Asia in Shanghai since December 2019. Its annual production capacity is projected to reach 750,000 this year. Its 2021 manufacturing capacity stood at 450,000, representing about half of Tesla's global capacity, including factories in the United States and Germany.