Feast for Asian startups kicks off 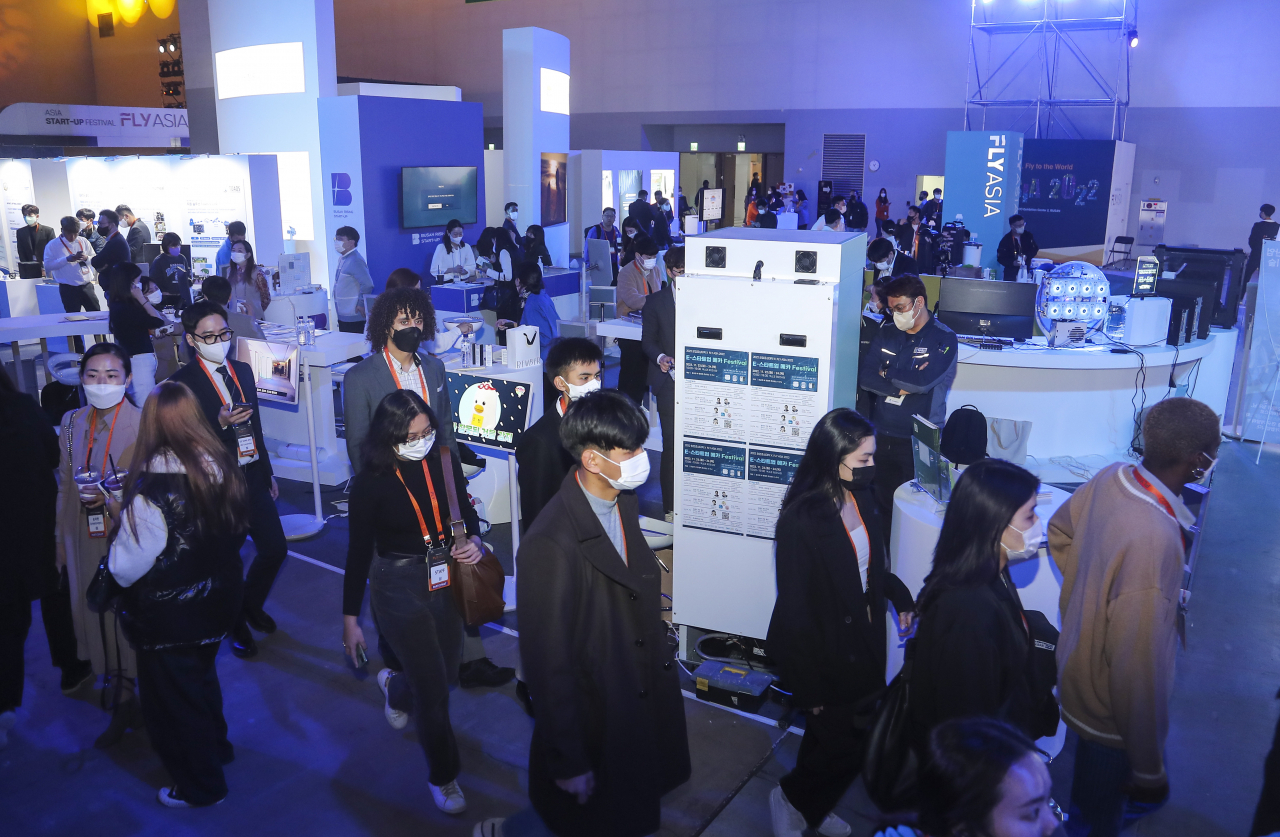 Attendees look around exhibition booths at the Fly Asia startup expo held at Bexco in Busan on Tuesday. (Yonhap)

Fly Asia 2022, a three-day expo for startups in Asia, kicked off on Tuesday at Bexco in Busan.

The city government of Busan expects Fly Asia to grow into one of the four largest feasts for startups on the continent.

Hundreds of investors, speakers, panels and government officials from 21 countries are taking part in about 40 different programs including conferences, an award ceremony, showcases and networking events through Thursday.

Among those who attended the opening on Tuesday were Busan Mayor Park Heong-joon; chairperson of the Busan Metropolitan Council Ahn Sung-min; chief of the office of startup and venture innovation at the Ministry of SMEs and Startups Lim Jung-wook; and Busan Techno Park President Kim Hyung-kyoon.

They looked around the venue of Fly Asia on the fourth floor of Exhibition Center 2 at Bexco which was divided into three zones.

The opening began with a performance by a B-boy group Jinjo Crew, winner of the world’s top five B-boy tournaments including the UK B-Boy Championships, Freestyle Session, Battle of The Year, R-16 Korea and Red Bull BC One.

Richard Yonck, futurist and author of “Future Minds: The Rise of Intelligence, From the Big Bang to the End of the Universe,” gave a keynote speech on the future of the startup ecosystem in Asia.

He spoke about what kind of creativity, discoveries, infrastructure and fundraising will support the future of startups, and asked the audience “how should we innovate innovation?”

At the Nurimaru APEC House in Busan, 22 city officials from Tokyo, India’s Bengaluru, Kazakhstan’s Almaty, Bangkok, Ho Chi Minh, Manila and Shanghai, among others, gathered to discuss ways to work together to better foster startups.

At the Fly Asia roundtable, Busan Mayor Park spoke about the city’s vision to grow into an Asian hub for startups and how it plans to cooperate with other cities.

Busan’s vice mayor of economic affairs, Lee Sung-kwon, highlighted the importance of cooperation among different cities at a welcome dinner with foreign ambassadors and other dignitaries.

Simultaneously with the opening on Tuesday, 50 startups entered the semifinals for the Fly Asia Awards at the conference hall of Bexco’s Exhibition Center 2.

The 50 startups, whittled down from a total of 178 startup teams, are making investor relations pitches in the semifinals.

The six winners chosen at the finals on Thursday will receive prize money and other support.

"We have solid programs for the inaugural Fly Asia, which will become one of Asia’s four largest startup feasts,” said an official at the Fly Asia 2022 Secretariat.

“The roundtable set the base for cooperation among cities with leading startup policies. We look forward to great outcomes for the rest of the feast.”