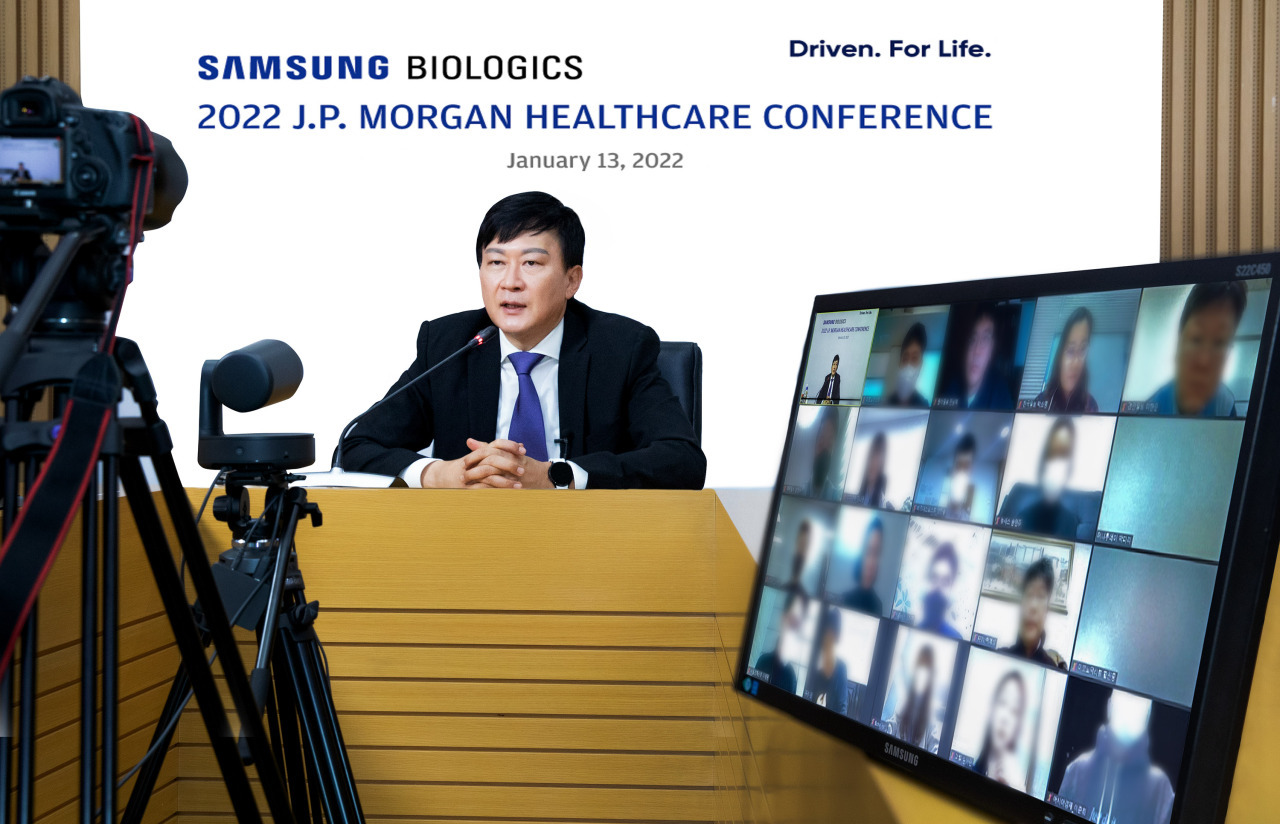 To solidify its No. 1 position in terms of production capacity, Samsung Biologics, a contract development and manufacturing organization under the Samsung empire, will begin partial operation of its fourth plant in Songdo, Incheon, this year, six months earlier than previously scheduled, the company’s CEO said Thursday.

“It took four years for our competitors to build (a facility), but it’s taking 32 months for us, shortening the construction period by 40 percent,” said Rim at an online press conference.

Samsung Biologics’ Plant 4 is expected to have maximum capacity of 256,000 liters once completed. Rim said the plant will be fully operative in the second quarter next year. Once Plant 4 is fully operational, the company will have a total capacity of 620,000 liters with Plant 1, 2 and 3 already in full operation, which will be enough to cover 30 percent of the total global demand.

Samsung Biologics has already secured contract agreements for five products with three global biopharmaceutical companies, Rim said without mentioning any specific names. He added that the company is in talks with 20 other global bio firms for orders of 30 more products.

The CEO also announced a plan to start the construction of Plant 5 in the first half of this year. As a multi-modal plant, Samsung Biologics’ Plant 5 will be able to manufacture cell and gene therapies, next generation vaccines using mRNA and viral vectors. Rim said Plant 5 is expected to start operation by the end of next year.

Samsung Biologics is looking to secure an additional site of 330,000 square meters in Songdo, Incheon for a second bio campus where the construction of Plant 6, Open Innovation Center and more plants will take place, according to the CEO.

Besides from the R&D center set up in San Francisco with contract development organization platforms, the company is carefully aiming for more overseas facilities in Boston, and other cities in Europe and China, to strengthen its global foothold.

Regarding overseas facilities, Rim said the company is considering various factors including the speed of construction, cost and risk management. He added that Korea is a better environment for expanding manufacturing sites in terms of cost and time. But the company will open all opportunities for new businesses and M&As.

“Due to the COVID-19, the market for CDMO is forecast to see an increase of 11 to 13 percent with more demands for outsourcing businesses,” said Rim.

The CEO also stressed the importance of sustainable growth, highlighting that the company was the first Korean bio firm to be included in the Dow Jones Sustainability World Index last year.

The press event, a first for Rim since he was named to lead the company, was held on sidelines of JP Morgan Healthcare Conference currently being held virtually.

The JP Morgan Healthcare Conference is the world’s biggest bio investment conference with the participation from 450 companies and 9,000 investors from around the globe.

The Korean biopharmaceutical giant was the country’s only company to be invited to the main track session at the global investment conference.

Samsung Biologics is scheduled to announce its earnings from last year at the end of this month.