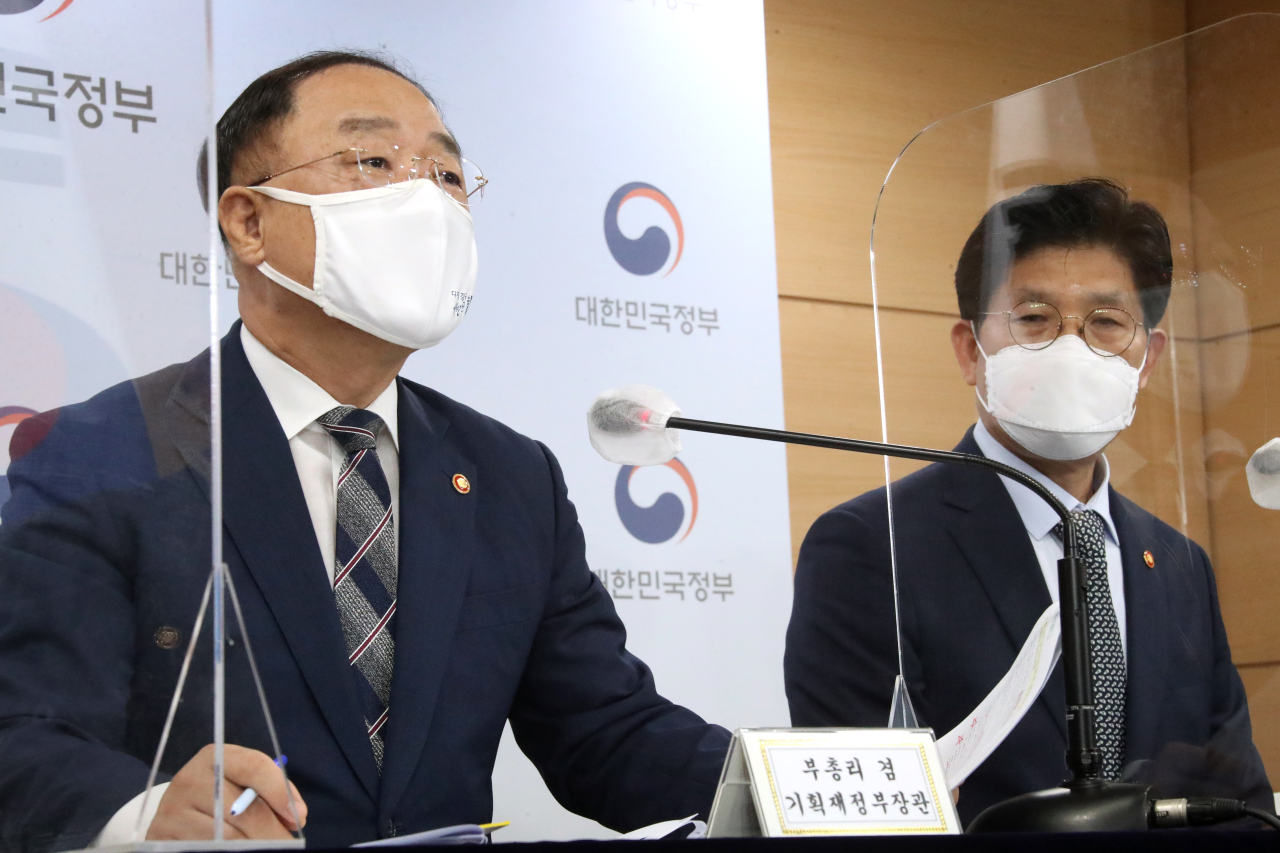 Finance Minister Hong Nam-ki speaks at a real estate meeting of related ministers held at the government complex in Seoul on July 28. (Yonhap)

South Korea’s fiscal policy chief said on July 28 that the nation’s heated housing market may see a sharper-than-expected drop in prices in the near-future, with the possibility of an interest rate hike by the end of the year growing.

“With the early subscriptions for houses scheduled in the second-half of the year, experts’ remarks indicating a price peak, a looming interest rate hike and liquidity control, there is a possibility of a partial housing price correction,” Finance Minister and Deputy Prime Minister Hong Nam-ki said in a real estate meeting of related ministers.

“If a price correction is adopted, then the market may face a sharper-than-expected adjustment,” he added.

He warned homebuyers to be “cautious” in purchasing overvalued properties with the intent of selling at a higher price, hinting they could lose money.

Hong mentioned the price corrections that followed past financial crises that led to a 9 to 18 percent price fall in overall Seoul apartment prices.

For his top real estate policy agenda for the second half of the year, the government will focus on providing more housing to the market, according to Hong. The government has been reconstructing residential areas in Seoul as part of that effort.

Screening on mortgages and other related lending will be tightened and attempts to manipulate market prices will be stumped, Hong vowed.

Hong’s remarks come as the Moon Jae-in administration has failed to cool the heated housing market, despite rolling out more than 20 sets of related measures. Of them, a set of “tenant-protection” laws passed in July last year has been receiving flak for cutting back “jeonse” supplies and increasing feuds between landlords and tenants.

Jeonse is a rental system where the tenant hands over a large lump sum to the landlord -- on average, about 65 percent of the value of the property -- and does not pay rent. The deposit is returned to the tenant at the end of the contract.

Apartment prices in Seoul have been continually rising and the median price of apartments in Seoul surpassed 1 billion won ($866,000) for the first time in July, data by KB Kookmin Bank showed. Those in the surrounding Gyeonggi Province reached 538.7 million won, according to the same data. On possible price corrections, experts have been saying that the government should tread cautiously, as overvalued housing markets are vulnerable to significant price adjustments.

A recent report from the Bank of Korea expressed concerns that an abrupt fall in housing prices in South Korea could deal a substantial blow to the nation’s consumer spending and the job market amid high levels of household debt.

Consumer spending and employment rate could both plummet 4 percent in the next two years if the median housing price falls 20 percent in the same period, according to the BOK’s calculations.

BOK Gov. Lee Ju-yeol has hinted a possible rate hike by the end of the year, saying that the economy recovering from the COVID-19 pandemic requires a shift in policy stance.

He has constantly expressed concerns over the nation’s heated housing market and said after the latest monetary policy meeting that Korea’s housing price is “extremely overvalued at the moment.”

“The problem here is that the price hike is closely tied to the nation’s growing household debt,” he added.