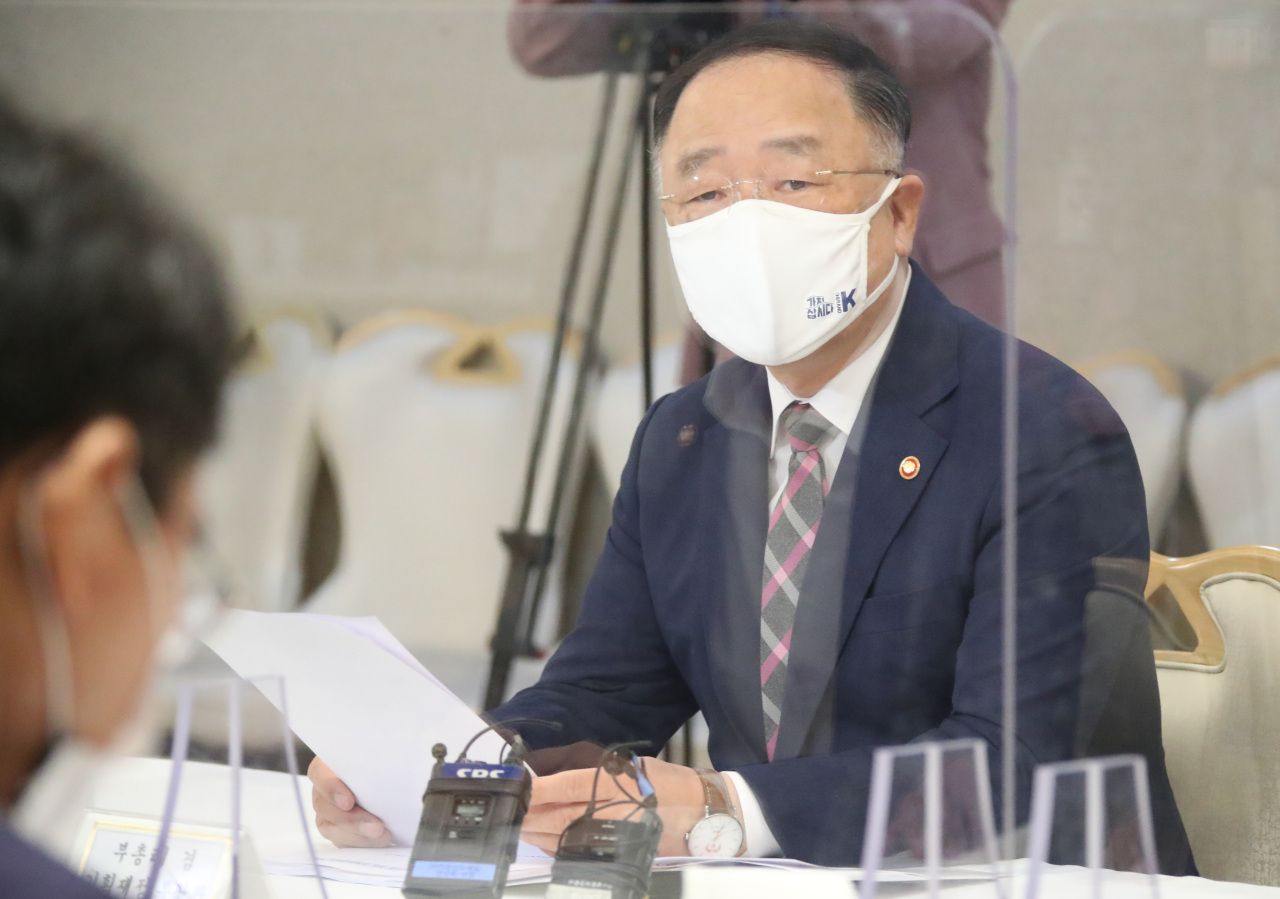 South Korea’s finance minister on July 21 lauded the success of property laws that took effect in July last year, saying they were able to increase lease contract renewals and protect tenants, despite growing criticisms of its side effects.

“The average annual lease contract renewal rate of 100 apartment complexes in Seoul stood at 57.2 percent before the bills took effect, but the bills pushed it up to 77.7 percent,” Finance Minister and Deputy Prime Minister Hong Nam-ki said in a housing policy-related meeting.

"We have confirmed through the filed lease contracts and cases in the 100 apartments that several tenants were able to benefit from the adoption of the related systems,” he added.

Hong’s remarks came as two of the three legislative proposals introduced by the Democratic Party of Korea -- the Housing Lease Protection Act and the Commercial Lease Protection Act -- have been in effect for a year. The third tenants’ rights bill, which amended the Act on Report on Real Estate Transactions so that rent would have to be reported to the authorities within 30 days of a lease being signed, took effect on June 5.

Under the revised laws, landlords can increase the rent by no more than 5 percent when renewing a monthly lease or a jeonse lease. In addition, tenants will have the right to extend a lease by up to two years when an initial two-year lease expires. Landlords can refuse only under a limited range of circumstances -- for example, if they or their direct family members plan on residing at the property, or if the tenant violates the lease such as by subletting.

Jeonse is a rental system where the tenant hands over a large lump sum to the landlord -- on average, about 65 percent of the value of the property -- and does not pay rent. The deposit is returned to the tenant at the end of the contract.

Hong further explained that the “5 percent rule” was adopted in 8 out of 10 lease renewal contracts, and the period of average tenancy has risen from roughly 3 years to 5 years since last year, an indication the legislations have offered more stability for tenants.

Despite Hong’s praise, critics have been saying that the laws have only fueled a spike in disputes between homeowners and tenants. It also prompted a price gap between leases that have adopted the 5 percent rule and those that have yet to, disrupting the market as a result, they added.

According to the Korea Legal Aid Corp., a state-run legal services provider, complaints related to feuds between landlords and tenants in the January-June period tripled on-year to 7,636 this year. The corresponding figure stood at 2,585 in the same period last year. The requests for dispute mediation in the same period this year soared nearly tenfold to 167 compared with 16 last year.

Some also have pointed to worries that frustrated landlords might further raise jeonse prices due to market uncertainties, which could hinder tenants seeking new homes.

“The government needs to prepare measures to curb a hike in jeonse prices after the current lease renewal contracts expire,” said Yeo Kyeong-hee, a senior researcher at Real Estate 114, a local think tank.

“It needs to swiftly come up with ways to increase jeonse supplies to the market,” she added.

According to KB Kookmin Bank’s real estate services platform Liiv On, jeonse prices have already been on the rise since the legislation has been in place. The average jeonse price of Seoul apartments had hovered around 400 million won ($347,000) from 2017 to 2020, but the price jumped to more than 600 million won as of June this year, data showed.

When the bills first took effect last year, it caused an unprecedented shortage of jeonse housing nationwide as landlords sought to empty properties ahead of the deadline so they could increase deposits for new tenants, as they would not be able to raise them again for four years.