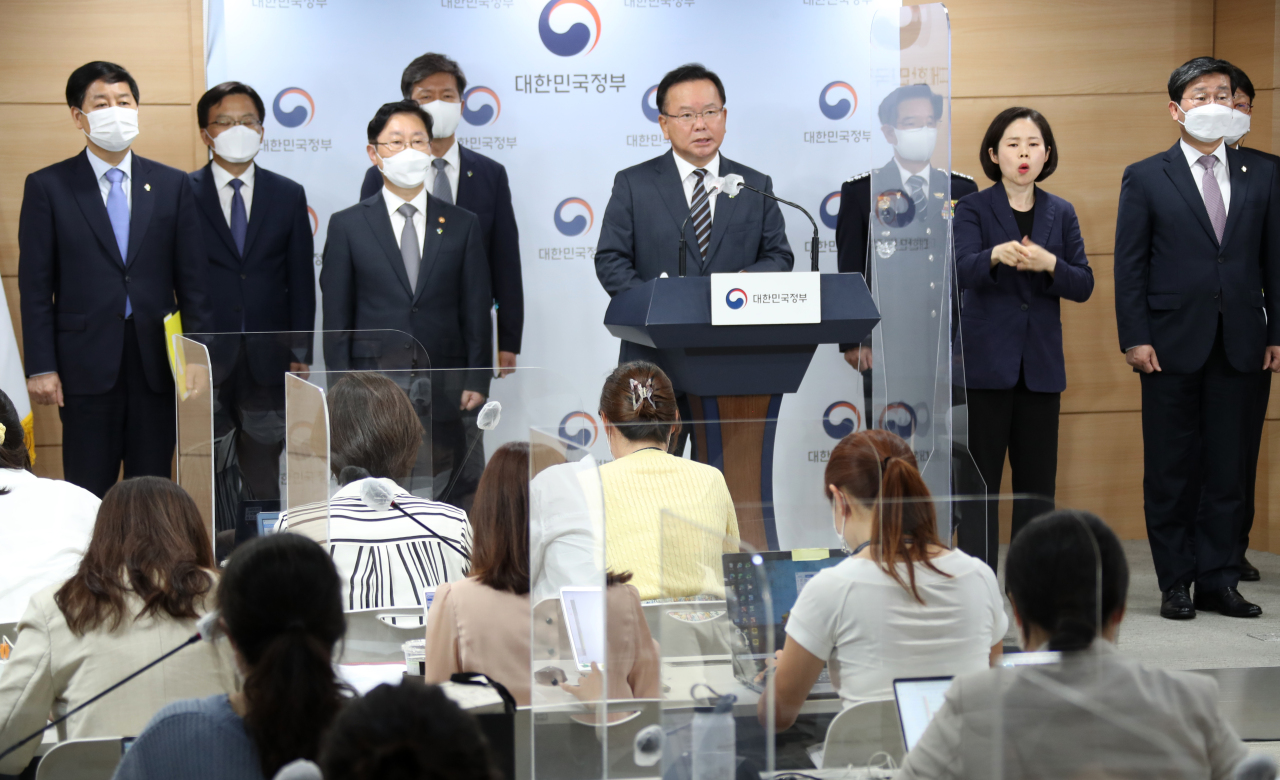 Prime Minister Kim Boo-kyum speaks at the government complex in Seoul, June 2, 2021, during a briefing on the interim results of an investigation into property speculation. (Yonhap)

Some 2,800 people suspected of having purchased land for speculation purposes, including some high-profile government officials, have come under investigation since the government launched a joint probe in March to root out illicit activities in the real estate market. Many now face criminal charges.

During a briefing on the interim results of the three-month investigation on June 2, Prime Minister Kim Boo-kyum addressed reporters with an apology on the government’s behalf.

“As a prime minister, I am very ashamed of the charges that public officials face, and I bow my head and offer my words of apology,” he said.

The government has arrested 20 people and reported over 529 others to the prosecution. It had also seized 90.8 billion won ($81.5 million) as of the end of May.

Various public officials are accused of using inside information to purchase land, including former vice-minister-level heads of institutions, heads of local governments, and city and county councilors.

The joint investigation team was launched after allegations emerged March 2 that dozens of employees of the state housing developer, the Korea Land and Housing Corporation, had bought land in two cities in Gyeonggi Province shortly before the government announced a massive development project there.

Since then, the investigation has spread to other kinds of illegal activity involving real estate, such as the unlawful resale of presale rights for apartments and speculative acts by public servants.

Separately, the government has decided to expand the scope of its requirements for public officials to register their properties. They are to apply not just at the senior level but will affect anyone working for a government agency or public institution, including teachers and others whose work has no connection to real estate.

The land speculation has fanned the flames of public outrage after the Moon administration’s 24 sets of real estate policies failed to cool down the heated market.

Since President Moon Jae-in took power in 2017, the average sale price per 3.3 square meters for an apartment in Seoul had risen by 87.4 percent to 43.58 million won ($39,236) as of May, according to data from KB Kookmin Bank’s real estate information platform Live Real Estate.

On Feb. 4, the government unveiled a new housing policy that focused on drastically expanding the supply of new homes. Previous efforts to discourage demand through loan restrictions and taxes failed to stop the home-buying frenzy.