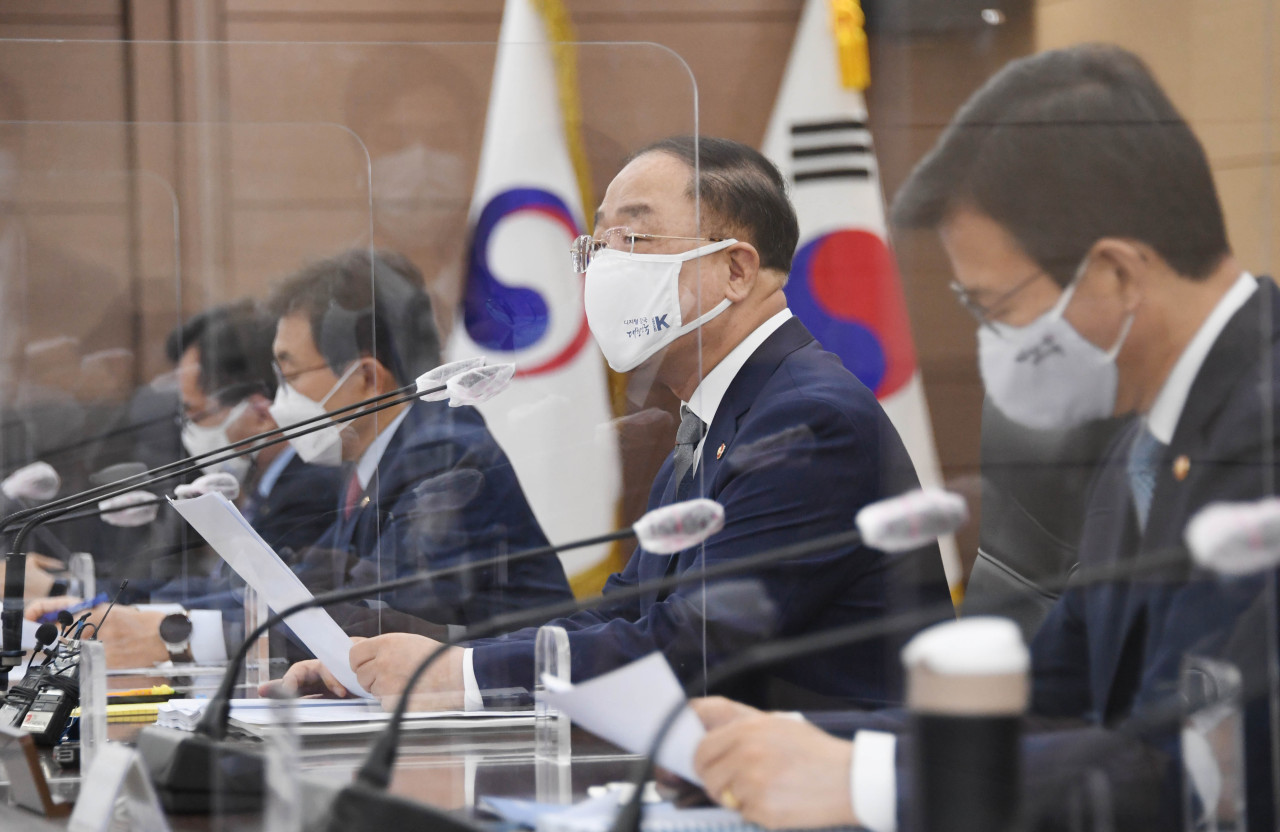 Finance Minister Hong Nam-ki speaks at a meeting of economy-related ministers at the government complex in Seoul on May 17, 2021. (The Ministry of Finance)

The South Korean government will support the development and commercialization of clean energy technologies and set up a climate response fund next year to achieve the goal of going carbon neutral by 2050.

Finance Minister Hong Nam-ki said Monday that preparation for the scenario to achieve net zero emissions is “in full swing,” while stressing the importance of a preemptive policy response related to climate cooperation.

South Korea plans to bolster its original target of reducing carbon emissions by 24.4 percent from the 2017 level by 2030. President Moon Jae-in said on April 22 the country would “additionally raise” the nationally-determined contributions (NDC), and report a new target to the United Nations within this year during a virtual climate summit with global leaders.

“The government decided to carefully review the NDC update level based on the potential amount that each sector, such as power generation and transportation industries, could reduce as well as consider the acceptance of stakeholders,” the Ministry of Economy and Finance said in a statement. The remarks were made after an economy-related meeting held on Monday to discuss policy directions to realize the country’s goal of carbon neutrality by 2050 and examine external factors related to environmental change.

Policy financing support will be expanded for renewable energy projects to sharpen competitiveness in the overseas market including tax breaks and investment for R&D. Offering financial support for oil and gas companies that seek to foray into renewable businesses through mergers and acquisitions also came under review during the meeting.

Under the blueprint for carbon neutrality, the country plans to set up the tentatively named Climate Response Fund in 2022 to help companies switch to renewable power and develop eco-friendly technologies.

The Carbon Border Adjustment Mechanism (CBAM), which places a carbon price on imports from countries with less ambitious climate commitments to tackle carbon leakage, will be operational from 2023 in European Union member countries. In light of such changes, the Finance Ministry said it would take actions to minimize any potential negative impact of the system on the country’s outbound shipments. Currently, the United States is considering adopting the mechanism.

“In preparation for the progress of the international discussion on the CBAM, we will review the gradual expansion of the emissions trading market and push for research on reforming the carbon pricing system,” it said in a statement.

Another effort accelerating the international decarbonization movement has been made by a dozen countries which vowed to stop official financing for foreign coal power projects including South Korea, Germany, France, Brazil, Finland, Sweden, the United Kingdom and the US.

The government will provide guidance to the related industries and financial institutions to prevent confusions that could stem from the suspension of public financing for new coal-fired power projects.

Asia’s fourth-largest economy will participate in international climate change discussions more actively including the 2021 Partnering for Green Growth and the Global Goals 2030, which will be hosted by South Korea on May 30-31.

The country will also increase the Economic Development Cooperation Fund in the green energy field to $600 million in 2025 from last year’s $200 million, according to the ministry.