Real estate investors drift away from Seoul, toward logistics 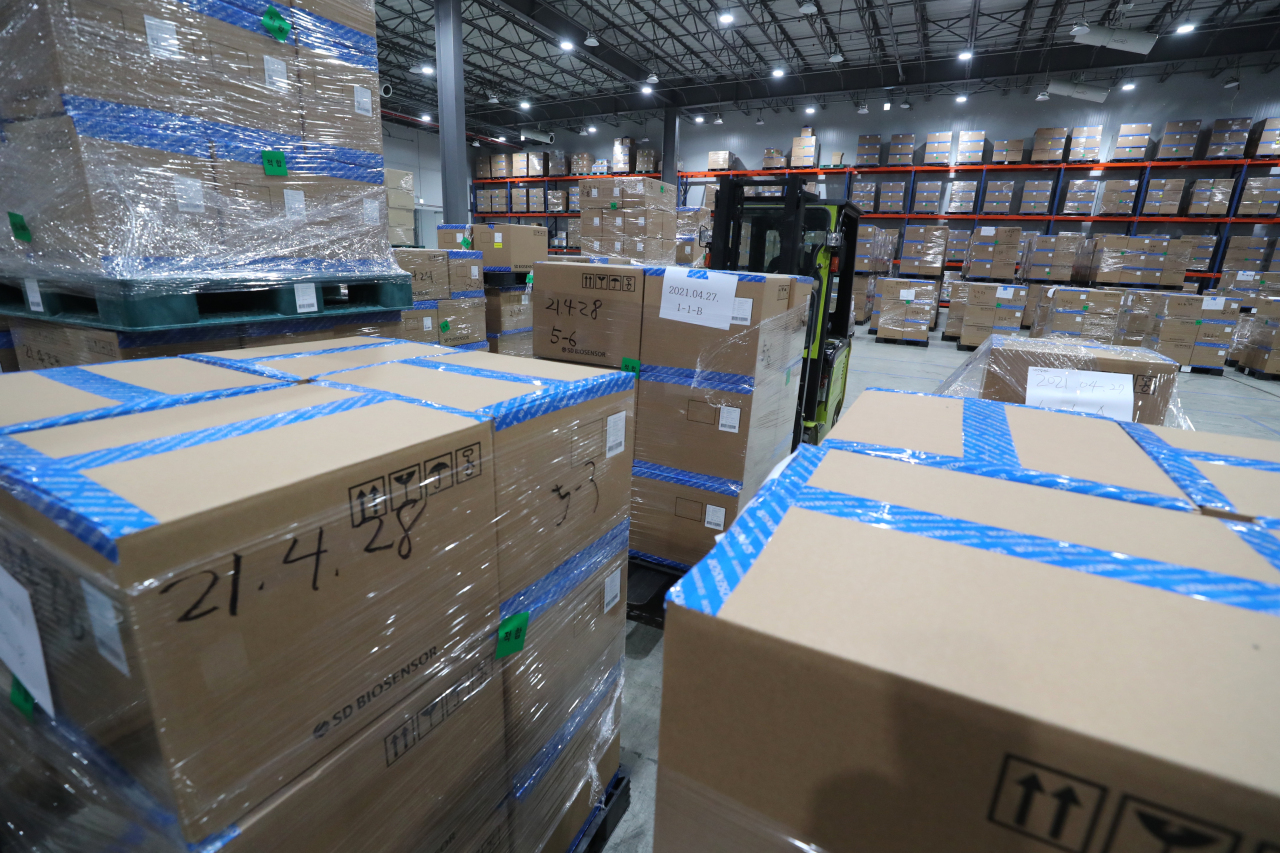 Boxes of self-testing kits are seen stacked up for nationwide distribution through a logistics center in North Chungcheong Province in April. (Yonhap)

Real estate investors searching for deals in South Korea were seen shifting their attention away from the capital city of Seoul in the first quarter of 2021 as demand for logistics assets rose, data showed on May 13.

Commercial property deals that closed in Seoul during the first quarter with tickets of over $10 million added up to $2.2 billion, down 25.8 percent on-year, while investment in other parts of Korea rose 3 percent to $2.6 billion, according to data from New York-based capital market tracker Real Capital Analytics.

Seoul’s share of all first-quarter nationwide investment came to 45.1 percent, down from 53.3 percent a year prior.

This trend is attributable to changing investor preferences during the pandemic era, according to RCA.

For example, midsize to large deals during the first quarter, including Singapore-listed Mapletree Logistics Trust’s $250 million acquisition of five logistics centers in the southeastern part of the Greater Seoul area, bumped up the figures for transactions outside Seoul.

Foreign investors’ appetite for properties outside Seoul -- including those in burgeoning logistics cluster cities in Gyeonggi Province such as Icheon and Yongin -- is growing consistently. Seoul’s share of inbound investment stood at 44 percent in the first quarter, a sharp contrast with 79 percent seen during the 12-month trailing period.

“In fact, most of the cross-border investment outside of Seoul, around 75 percent over the 2015-2021 period, has been going towards industrial properties,” said Benjamin Chow, head of analytics, Asia-Pacific, at RCA.

“Given the favorable supply-demand dynamics for logistics properties in South Korea, we do expect interest from overseas investors to be maintained into this year. Whether they are able to successfully outbid domestic investors is another issue altogether.”

Despite the downtrend, Seoul was the second-most-active metropolitan city in the Asia-Pacific region in terms of commercial real estate transactions, trailing Tokyo.

“Cross border investors still concentrate their purchases of office and retail properties primarily within Seoul,” Chow said, adding that the purchase of Starfield Hanam by Blackstone last year was a noteworthy exception.

Meanwhile, Korea as a whole was ranked the third-largest destination for commercial real estate investment among the Asia-Pacific countries, according to RCA. Its first-quarter transactions fell 13 percent on-year, but the figure during the 12-month trailing period until March, $25.6 billion, was 6 percent higher on-year.

Korea was estimated to be the 10th-largest source of cross-border commercial real estate investment, deploying $572 million over the past 12 months, down 44 percent on-year.