Hanjin Group Chairman Cho Won-tae said on Nov. 18 that the merger of the nation’s two largest carriers, Korean Air and Asiana Airlines, will not lead to a price hike or workforce restructuring.

After attending the Korea-US Business Meeting at the Federation of Korean Industries in Seoul, Cho told reporters, “There may be concerns about such a (monopoly),” but “there will be no (lower) customer convenience or price hikes.” 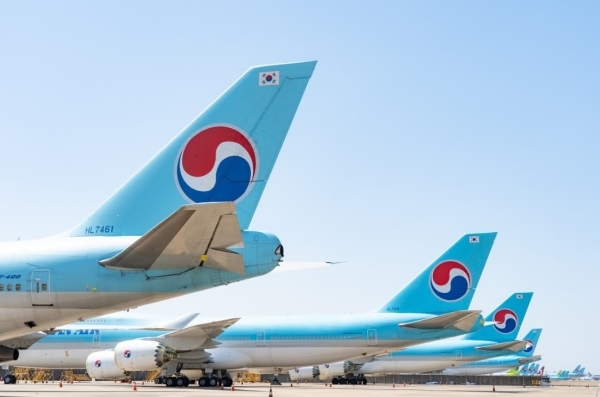 Regarding the restructuring of workforce after the merger, he said, “We have no plans to restructure our workforce,” adding, “We will create an opportunity to embrace all employees and welcome them as a family.”

“I will do my best to ensure that no one is left behind. I will meet (the unions of both companies) as soon as possible and find a way to coexist.”

When pointing out that it is not realistic to overcome the COVID-19 crisis without restructuring, he said, “It is true that there are many overlapping routes and personnel when considering the size of the two companies.”

But he added the firm can fully utilize the overlapping personnel if it considers expansion of routes and business.

Currently, Korean Air and Asiana Airlines have about 18,000 and 9,000 employees, respectively. Korea Development Bank Vice President Choi Dae-hyun estimated at a press briefing Monday there would be 800 to 1,000 overlapping employees once they are merged.

Regarding the plan to respond to a three-way alliance opposing the takeover of Asiana Airlines, he said he had no plans. The three-way alliance, consisting of activist investor KCGI, Bando Engineering & Construction and former Korean Air Vice President Cho Hyun-ah, is at odds with Cho Won-tae over control of Hanjin Group.

To the criticism that the support of KDB is a special favor, he said, “I don’t think so,” adding, “When KDB asked about my intention first, I said I could do it, and it proceeded after meeting several times and talking for a long time.”

Despite Cho and KDB’s strong willingness for the companies to merge, the process does not appear to be on course for smooth sailing.

The interests of the two firms’ labor unions are currently sharply divided, with Korean Air workers supporting the merger and the Asiana Airlines union opposing it.

On Tuesday, the Korean Air union issued a statement that it respected the decision to take over Asiana.

“We agree that the decision was made to enhance the competitiveness of the air transport industry, which is a national key industry, and to solidify the value of existence,” the Korean Air union said. “The acquisition is the best choice for maintaining employment of aviation workers.”

“The government and the management of both companies should make clear their commitment to job security for workers who are anxious about employment.”

The next day, the Asiana Airlines union called for an immediate withdrawal, labeling the merger plan as “secret collusion.”

The Asiana Airlines union issued a statement Wednesday, saying, “Because the merger of the two national airlines is a monopoly in the market and the public will bear the cost, it is prohibited by the law. But, (KDB and the management) are trying to justify (the merger) by decrying Asiana as an unrecoverable company.”

“We cannot help but suspect that another conspiracy and interests are involved in collusion for KDB -- just because it has a little more shares -- to push the merger, which the survival of many workers depends on.

“As KDB announced, Asiana Airlines is already a bankrupt company. But its stock price soared for several days before the announcement of the merger,” it added.

The Asiana Airlines union called for the withdrawal of the merger plan, warning workers will fight it to the end.

Later in the day, private equity fund KCGI, a shareholder of Hanjin Kal, released a statement opposing the merger plan following several similar statements over the past days.

This time, it argued that the investment agreement signed between KDB and Cho Won-tae is not effective because the stakes Cho provided as collateral to KDB is very small.

On Monday, KDB said it would inject 800 billion won ($723 million) into Hanjin KAL, a major stakeholder of Korean Air Lines, by buying 10.6 percent of newly issued common shares as well as exchangeable bonds in a capital increase in December.