The contract development organization is designed to serve clients -- mostly biopharmaceutical firms there -- to offer them services for their development of treatments for illnesses such as cancer, rheumatoid arthritis immunotherapy and treatment for neurodegenerative diseases such as Alzheimer’s disease and Parkinson’s disease. 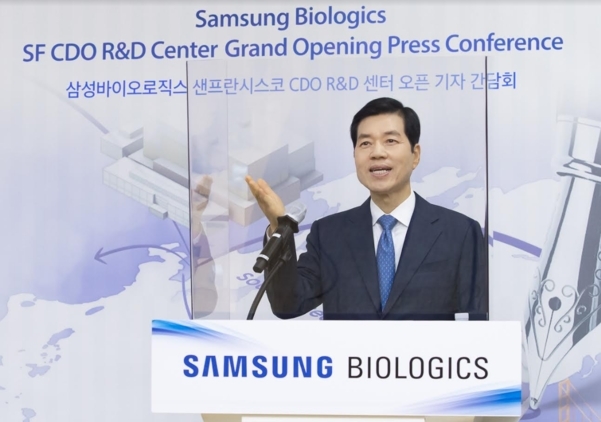 “We are excited to be part of this energetic industry and contribute to the healthcare with the ingenuity and innovation,” Kim said in an introductory video released at a press briefing, celebrating of the launch of the contract development facility.

“Samsung Biologics will continue to provide biopharmaceutical development and manufacturing services with top-notch capabilities and capacity, so that biotech pharmaceutical companies can focus on their expertise, discovery, development or marketing and sales of novel biologics for your patients.”

“We have also been expanding our business scope from CMO into CDO and (contract research organization) to provide a broader service scope to our clients as a fully integrated one-stop service CDMO partner,” Kim said.

Even after the launch in San Francisco, however, Samsung Biologics’ main function as a contract development organization for the time being will stay in its headquarters in Songdo, Incheon.

Under the current blueprint, Samsung Biologics will set up new R&D centers in the eastern United States, Europe and mainland China. A new CDO center in eastern US will start operation by no later than 2021, according to the company’s plan.

“In 2020 and beyond, our next decade will be marked by global expansion,” Kim said.

Samsung Biologics was founded in 2011 as a biotech venture of South Korea’s largest conglomerate Samsung. The announcement of the US CDO launch came three months after the COVID-19- triggered delay.