Stock prices of Hyundai Motor Group‘s affiliates remained largely unfazed by the announcement of the South Korean conglomerate welcoming Chung Euisun as its new chairman on Wednesday, except for Hyundai Glovis, a subsidiary controlled by the new leader.

The group’s crown jewel Hyundai Motor Company’s stock traded 0.54 percent lower at 177,500 won ($154.78) as of 15 minutes before the market close while Hyundai Mobis, an automotive parts company, traded 1.49 percent lower at 232,000 won. The conglomerate’s other car manufacturing subsidiary Kia Motors, where Chung served as CEO from 2005 to 2009, saw its shares fall 1.89 percent to 49,350 won in the morning trading session. 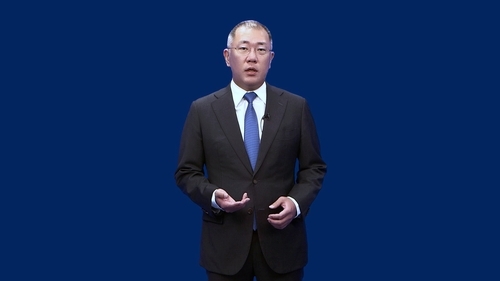 Hyundai Motor Group Chairman Chung Euisun delivering an online speech to employees on Wednesday after he was promoted to chairman of the group at its headquarters in Yangjae, southern Seoul. (Yonhap)

Chung holds a majority 23.29 percent stake in the logistics unit of the group.

The newly-appointed chairman is set to control the 100-trilion won business titan by holding a mere 2.62 percent stake in Hyundai Motor Company and 0.32 percent in Hyundai Mobis thanks to the conglomerate’s complex cross-shareholding structure.

The announcement of Chung replacing his father, now honorary Chairman Chung Mong-koo, appear to have not made much of an impact to the stock values of the auto giant‘s subsidiaries, as the market perceives the news not so dramatically.

“There will not be drastic changes at the conglomerate since Chung, as executive vice chairman, has already been a de facto leader of the conglomerate even before assuming the chairman post officially,” said Lee Chae-il, an analyst from Eugene Investment & Securities, declining to comment on the anticipated restructuring scheme of the company’s ownership structure.

Despite many challenges ahead such as an accelerating shift toward electric vehicles as well as the group’s incomplete governance reform, other market analysts said the new leadership at the automotive behemoth will bode well for the stock prices of companies under Hyundai’s wing.

“Automotive companies are required to have a visionary leadership more than ever before due to the rising demand for next-generation vehicles and the ongoing coronavirus pandemic,” said Kim Jin-woo, an analyst from Korea Investment & Securities, adding “With the new chairman at the helm, Hyundai will be able to quickly respond the fast changing mobility segment while improving the conglomerate’s ownership and business structures to beef up its competitiveness.”

Some also predicted that the nation’s largest automotive company will likely deploy shareholder-friendly policies while trying to be in line with the current government’s strict rules on cross-shareholdings.

“Hyundai Motor Group’s new policies that are forecast to be more favorable for shareholders than now will bring positive effects to stocks of companies under the conglomerate,” Kang Seong-jin, an analyst at KB Securities, said.

Because of stalled vaccine trails by global drug makers, including one made by Johnson & Johnson, the domestic stock market dipped in intraday trading, and those stocks linked to Hyundai also seemed to have corrections on the day after recent rallies.