Hyundai Oilbank announced on Oct. 8 it plans to grow the number of its electric vehicle charging stations to 200 by 2023.

The petroleum and refinery company currently operates 20 charging stations for electric cars, but a partnership agreement signed with Charzin, a company specializing in electric vehicle charging infrastructure, on Wednesday will see the number grow tenfold in the next three years. 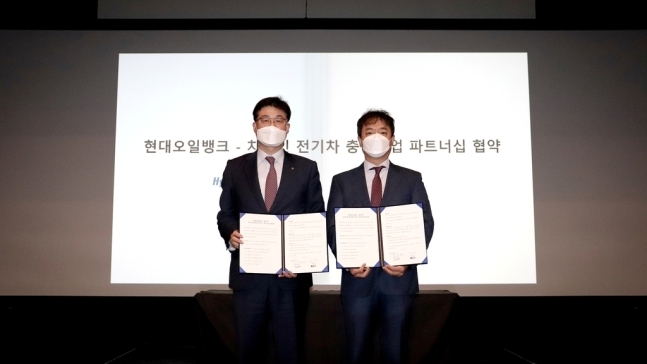 Under the new move, electric vehicle chargers of 100kW or more will be installed at gas stations in downtown areas.

The company also revealed plans to set up charging stations at logistics companies’ distribution centers as part of efforts to take advantage of the growing demand for electric trucks, as well as expanding its infrastructure at drive-thru stores and large-sized convenience stores.

In addition, different price plans will be rolled out for customers with various needs, with plans for a membership service that would include shared parking, car washes and discounts.

The announcement comes as the government’s recent plans for the automobile industry predicted that the number of electric cars will increase from some 90,000 units last year to three million by 2030.

“Though customers prefer 50kW chargers that support fast charging, those are expected to only account for 20 percent of all chargers by 2025. We plan to attract a growing number of electric vehicle drivers to gas stations and continue to create synergy with a pre-existing platform business such as a premium car wash service,” said Han Hwan-gyu, a sales director at Hyundai Oilbank.