‘Blockchain, there’s no turning back’

HONG KONG -- The RISE conference is reputed as one of Asia’s largest tech events with a focus on startups. For instance, one of the key speakers was Sophie Kim, founder of successful grocery platform Market Kurly. She talked about how she merged technology with grocery delivery. A number of startups from South Korea with an edge in artificial intelligence also exhibited their stuff.

What wasn’t on display, however, was how far blockchain or cryptocurrencies have come since last year’s meltdown. In fact, throughout the entire three-day event that showcased 385 speakers, there were only four sessions on blockchain and only one on cryptocurrencies.

“It has been the most productive period, because even after the 2017 peak, people in the blockchain sector have never stopped building -- in fact, there are many more projects already launched and many with in the mainnet phase are in the pipeline,” said Crypto.com co-founder and CEO Kris Marszalek in an interview with The Investor on the sidelines of RISE. 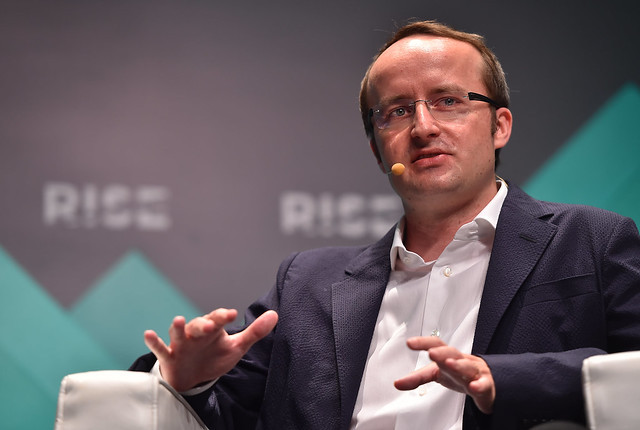 Crypto.com is a blockchain-based payment platform based in Hong Kong. It has launched a series of cryptocurrency-backed financial products including Visa-backed prepaid cards and instant loan products. The VISA prepaid cards are currently available in Singapore and the US, and are expected to be introduced in Korea, Europe and Canada later this year. The company also offers crypto-based investment products with which users can earn up to 8 percent interest gain.

Marszalek noted that the public and media both seem to have lost their interest in blockchain and cryptocurrencies, and this might have resulted in the fewer number of sessions at RISE. But he said he was not at all concerned.

“Many global brands are building their own blockchain projects including Samsung Electronics and Facebook,” he said, calling Facebook’s announcement of its own cryptocurrency Libra the most bullish news of the year. “Facebook’s Libra legitimizes the entire cryptocurrency space immediately.”

This kind of progress, along with the involvement of other global brands including Samsung, is making it hard to reverse the trend, he added. Samsung embedded a crypto wallet in its flagship phone Galaxy S10 earlier this year.

“For our part, we’re trying to fulfill the growing needs of consumers by providing new types of experiences in cryptocurrencies,” the CEO said.

He was also optimistic about regulations on blockchain and digital currencies despite the current rigid environment around the world. “It usually works that way -- put control in place first and relax them as the government figures out the new technology,” Marszalek noted. “The real area that should be regulated now is artificial intelligence and not the blockchain industry, because AI could be applied to really scary stuff.”