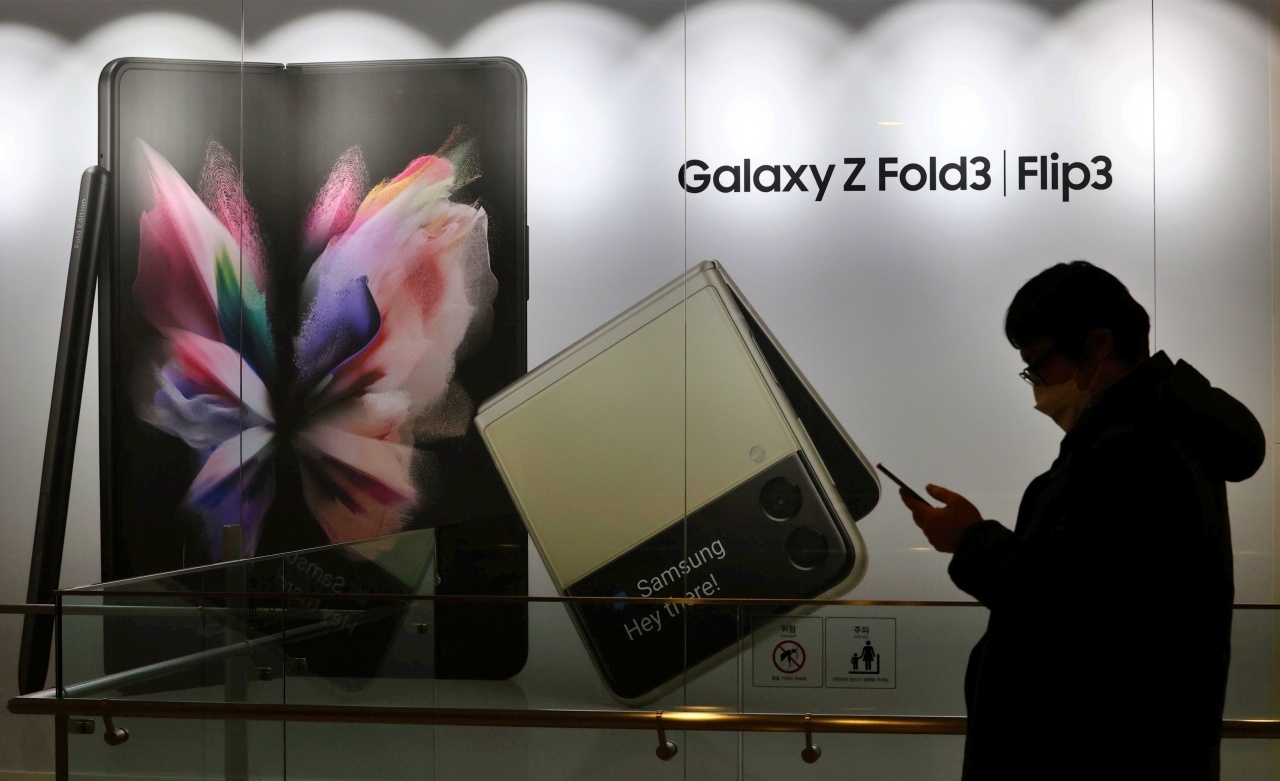 A pedestrian walks past a Samsung D’light shop in Seocho-gu, Seoul, Jan. 7. (Yonhap)

Though the pandemic has driven record-breaking profits for tech firms, as demand for at-home leisure and communications hardware rises, it has also brought a growing threat from patent trolls.

Companies specializing in exploiting patent rights have been buying up intellectual property from firms struggling with the pandemic and using it as ammunition against Korean firms.

The approach is often seen as a “file-and-settle” strategy, as their targets often prefer to avoid fighting a time-consuming court battle and the costs associated with it, even if they are likely to win the case.

As a result they are settling an increasing number of patent suits at an early stage of court proceedings, particularly in the United States, where the tech market is largest.

Of the 809 patent suits closed over the past five years involving South Korean companies until March 2021, under which most of them were defendants, 72 percent were settled before or during pre-trial procedures like discovery. Only 4 percent made it all the way to a court verdict, according to data compiled by the Korean Intellectual Property Office and the Korea Intellectual Property Protection Agency.

And an increasing number of suits are being filed by non-performing entities, which hold patents but do not use them to make products, but instead seek to profit from others’ use of them.

The cost of going all out and losing the litigation could be immense for tech companies here, and that is before considering the damage to their image. LG Electronics was ordered to pay $45 million, the largest jury award in the past five years to non-performing entity Mondis Technology.

In the six verdicts during the past five years against Korean firms, they were ordered to pay an average of $15 million, according to government data.

“Defendants with abundant cash will likely end up paying a settlement to non-performing entities, while few plaintiffs are likely to go to greater lengths to make it to trial or reach a verdict.”

But settling the disputes with cash has its own problems, as it encourages more file-and-settle attempts targeting similar payouts, often colloquially known as patent trolling.

Even former executives are joining forces with patent trolls to profit from such activities. Last week, ex-Samsung patent head Ahn Seung-ho was revealed to have joined hands with Staton Techiya, a US-based NPE, to file a complaint against Samsung. According to the complaint, Synergy IP, founded by Ahn in 2020, has the exclusive right to sublicense 10 patents owned by Staton Techiya. Earlier this week, Ahn reportedly described the upcoming patent litigation as “a duty I’m tasked with.”

Experts claim the COVID-19 pandemic acted as a catalyst for patent trolling activities as profits soar and trolls scoop up patents from distressed firms.

Since 2020, large Korean companies -- defined as those with over 5 trillion won ($4.2 billion) in assets -- were more likely to fall prey to patent suits from non-performing entities, according to data from the Korean authorities.

From January to September last year, there were 153 patent cases where large companies like Samsung or LG were defendants in the patent filings, accounting for over 90 percent of all cases filed against Korean entities. The figure approached that of the full year of 2020, at 160, and far outnumbered that for 2019, at 112.

Also, during the first half of 2021, 86 percent of patent complaints against Korean large companies were filed by non-performing entities, up from 75 percent through 2020 and 77 percent in 2019, the state data also showed.

In particular, Samsung was the most targeted defendant for US patent disputes in district courts during 2021, according to an estimate by risk management organization Unified Patents earlier in January.

The number of non-performing entities’ patent complaints against the field of electronics and wireless communications technologies rose over 40 percent year-on-year to 102 in 2020. Also, nearly 80 percent of the entire complaints against Korean firms from January to September 2021 went to those dedicated to such fields.

Chung of Konkuk University Law School said Korean firms find the electronics and communications market “more lucrative in the US, driven by the impact of the COVID-19 pandemic.”

On the other hand, more companies suffered financial strain due to COVID-19 uncertainties, forcing them to divest of their patents as they were on the brink of collapse, or failed to survive.

Manufacturers that do business based on patents they invented sold their patent rights to secure their balance sheets as the COVID-19 pandemic took its toll.

The companies tend to offload patents to non-performing entities, which have the wherewithal to make legal claims based on those patents.

This has continued into the fourth quarter, allowing these entities to launch more attacks against Korean firms.

For example, Samsung in December was sued over the rights of three wireless communication patents by Spier Technologies, a non-performing entity, as the patent ownership was transferred from US defense technology firm L3Harris to Spier Technologies, according to risk management firm RPX.

“The fourth quarter (of 2021) also saw a steady flow of patent divestments from operating companies to NPEs, including some linked to familiar and prolific litigants,” a report by RPX noted last week.