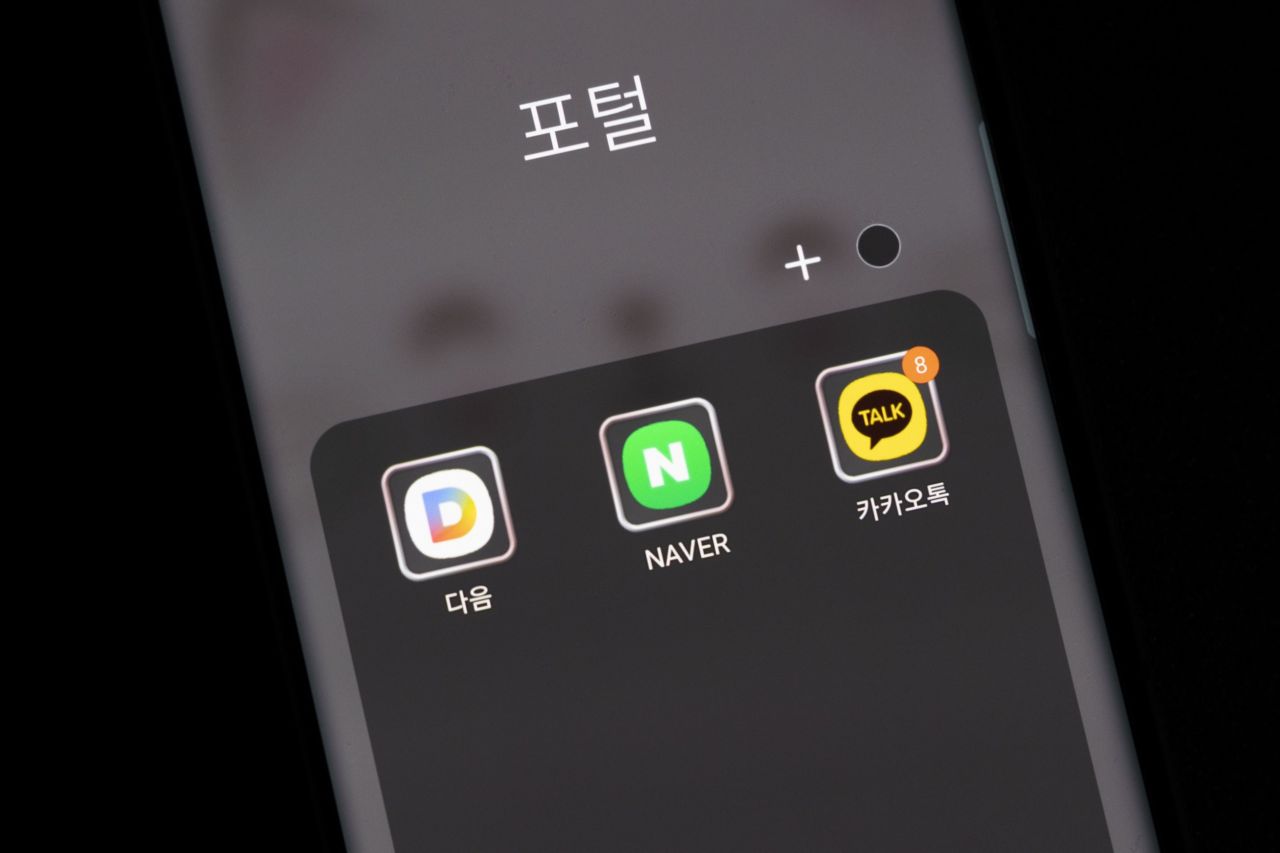 Naver and KakaoTalk apps are displayed on a smartphone. (Bloomberg)

For Lim Jeong-yeo, a 30-year-old retail investor living in Seoul, Kakao and Naver shares account for 80 percent of her spare money and most of her stock portfolio.

“I wish I’d found a more appropriate timing to purchase the stocks – I didn’t know they’d fall like this,” she said Wednesday.

Lim is one of the growing number of “young Korean investors” in their 20s and 30s who believe that saving monthly wages is no longer the answer to their personal finances. Stocks and cryptocurrencies have been gaining popularity among young investors here in recent years as a measure to boost their finances, so they can actually buy personal properties such as houses, whose prices have been surging at an unprecedented level.

Naver and Kakao, which debuted on the nation’s secondary tech-heavy bourse Kosdaq nearly two decades ago and later transferred to the main bourse Kospi, are considered the Amazon and Apple of South Korea. They were meant to be pillars of retail investors’ portfolios and weather the storms of the fourth industrial revolution.

Though rebounding slightly on Wednesday, Naver and Kakao shares have shocked investors after their market shares shrunk by a combined 14.9 trillion since the beginning of the year. The US Federal Reserve’s growing hints of a faster-than-expected rate hikes and monetary tightening was blamed, but uncertainties surrounding the Big Tech companies’ relentless growth and management ethics were at the eye of the storm.

Kakao Pay executives’ recent dumping of the firm’s stocks caused a ripple that pulled down the prices of its affiliates’ shares as well. Incumbent Kakao Pay CEO Ryu Young-joon who was named co-CEO of parent company of Kakao Corp. in November dumped 230,000 Kakao Pay shares worth 46.9 billion won in a block deal in December. Ryu has officially asked for Kakao to retract his nomination as co-CEO which was to confirmed in March by shareholders and is set to step down from his current role as Kakao Pay CEO.

Noting the new uncertainties surrounding Kakao, Goldman Sachs analyst Park Sin-young on Wednesday downgraded KakaoBank from “neutral” to “sell.” He slashed the target price by 36 percent from the previous 82,000 won to 52,000 won.

Park’s note revealed that management ethics was not the only risk surrounding the firm, saying that the government’s tightening grip on the real estate market and household debt could place hurdles for KakaoBank’s loan business.

Naver shares closed at 345,500 won on the same day, some 3.13 percent up from the previous session. Though it may seem to be slightly doing better than Kakao, its share prices fell some 11 percent since the beginning of the year, compared with Kakao’s some 14 percent.

“Naver’s e-commerce sales have slowed down and an increase in labor and marketing costs is likely to result in some 8.2 percent decline in its operating profit growth for the fourth quarter of 2021,” Oh Dong-hwan, a senior analyst at Samsung Securities said.

“The concerns surrounding government regulations on Big Tech have been growing, so its stocks are expected to improve after the effects of its global content business materializes in the second-half of this year.”

Despite volatilities stemming from the US Fed’s shift in monetary policy, stocks are likely to be remain a preferred way of investment for young investors.

In a December survey jointly conducted by The Herald Business, The Korea Herald’s affiliate company, 31.8 percent of 1,018 South Koreans between the age of 18 and 39 chose “stocks” as their preferred choice of investment. It ranked No. 2 after “real estate,” which received 38.1 percent.

“I don’t plan to offload my Kakao and Naver shares at the moment,” Lim said.

“This is a long-term investment. I just hope Kakao and Naver would do a better job managing their labor force and employees, which is a key task that IT companies face these days.”