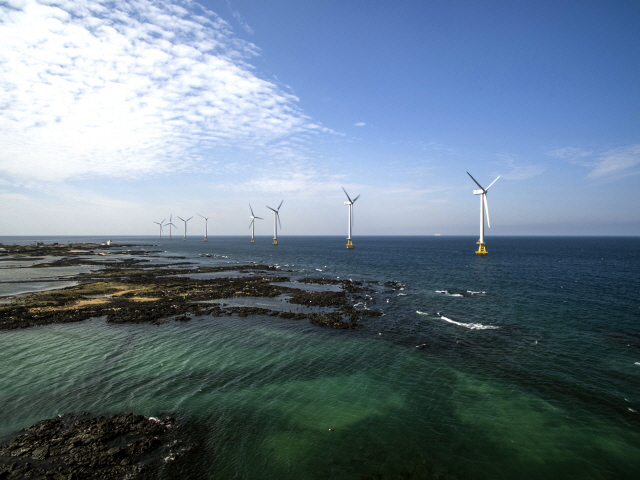 An aerial view of wind turbines off west coast of Jeju Island under Tamra Offshore Wind Power, which has a combined 30-megawatt in power capacity. The offshore wind farm is the first commercial one to operate in South Korea. (Korea South-East Power Co.)

South Korea is in need of more aggressive investment in the renewable energy sector in order to achieve its offshore wind capacity goal by 2030 and address the country’s geographical weaknesses in wind energy, a report showed Nov. 14.

Korea was ranked 21st in terms of attractiveness of renewable energy investment and deployment opportunities, in a report that announces the top 40 countries in the assessment, according to London-based consulting firm Ernst & Young.

Korea has slid down the rankings, from 13th in November 2020 to 17th in May 2021, although Asia’s fourth-largest economy improved its score to 57.6 points in EY’s Renewable Energy Country Attractiveness Index, the highest yet. The index assesses a country’s technology capacity to take advantage of renewable energy resources -- ranging from wind to solar, biomass, geothermal and hydrogen -- with the United States topping the list at 72.8 points, followed by China on 70.7 points.

“South Korea looks set to struggle to meet its ambitious renewable energy target of 12 gigawatts of installed offshore wind capacity by 2030 without significant investment and buy-in from heavy industry leaders,” the report read.

“Fixed-bottom offshore wind appears unsuitable, so Seoul must bank on the development of floating offshore technology.”

The latest report on the offshore wind market’s outlook was a significant step back from their own assessment just a year prior, which had noted that the sector is “proving highly attractive” following Seoul’s announcement of its Green New Deal policy to have 20 percent of the country’s electricity generated from renewable sources by 2030.

Moreover, the volatility in power supply due to an increase in renewable power generation is posing a challenge to Korea’s current power grid infrastructure.

“(Korea) must boost investment in power grid infrastructure by around 50 percent over the next 10 years in order to achieve sustainability in line with the net-zero gas emission goal,” Kim Bum-choong, a partner at Ernst & Young Han Young who leads its Energy & Infrastructure sector, said in a statement.

Korea had installed 1.6 gigawatts of onshore and offshore wind capacity as of 2020, according to data by the Korea Wind Energy Industry Association. Offshore wind accounted for just 8.7 percent of that.

Neighboring Japan is faring better. Japan, which has maintained the eighth spot in the Renewable Energy Country Attractiveness Index over the past 18 months, is building its first offshore wind foundation plant to develop a local supply base in targeting expansion of offshore wind capacity.

Meanwhile, Korea unveiled a pledge to cut carbon emissions by 40 percent by 2030, as part of its net-zero emission goal by 2050.