Seoul to back local chipmakers after US info request 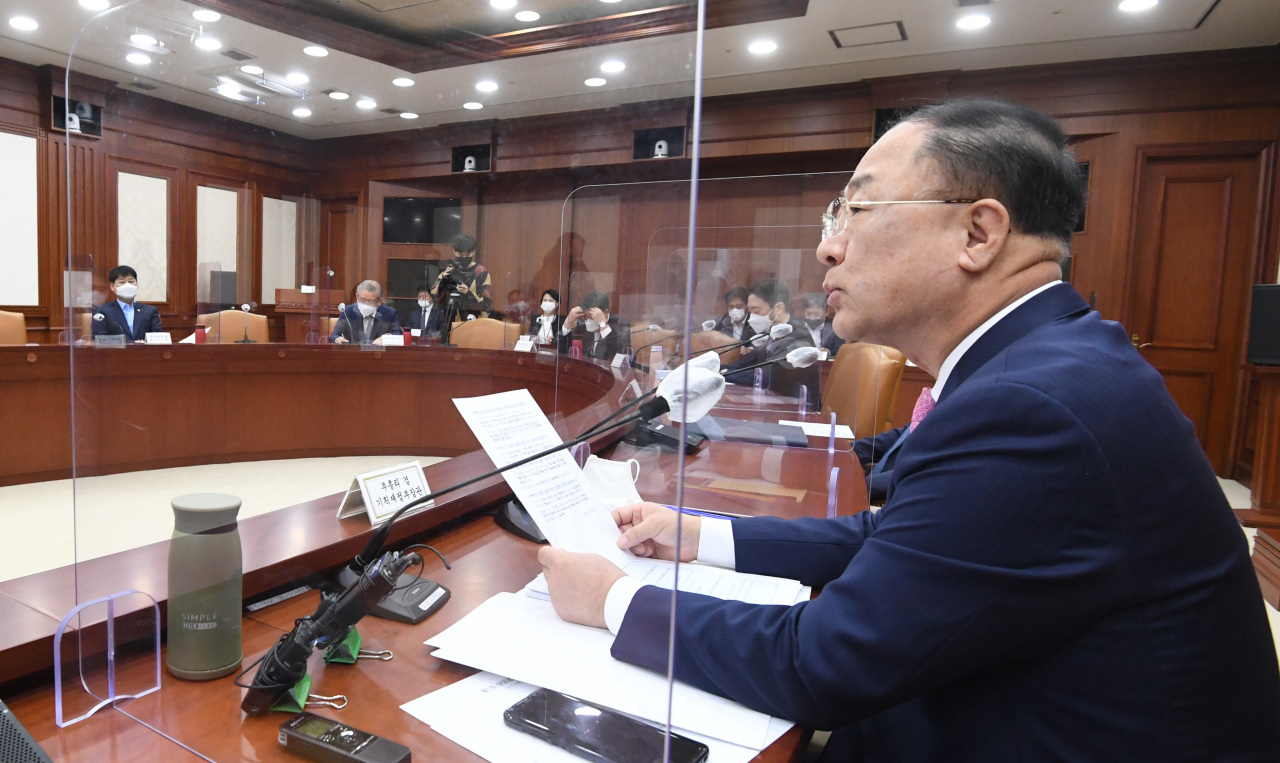 This photo, taken on Monday, shows Finance Minister Hong Nam-ki presiding over a government meeting on the economy and security in Seoul. (Yonhap)

The government will support South Korean semiconductor companies no matter what they decide to do about Washington’s request for information on their supply chains, Finance Minister Hong Nam-ki said Oct. 18.

In September, the US Department of Commerce asked global chipmakers, including Samsung Electronics, to provide corporate data on matters such as inventory, demand and sales to “help improve trust and transparency within the supply chain.” The due date for its submission is Nov. 8.

“Considering the sensitive information (involved), it is necessary to respond based on corporate autonomy, government support to alleviate corporate burdens and cooperation between Korea and the United States,” he said during a meeting at the government complex in Seoul.

The meeting marks the first sit-down talks attended by five economy-related ministers and six other high-ranking government officials, including those from the National Intelligence Service and Cheong Wa Dae, to map out strategies to ride out uncertainties stemming from external factors that influence the country’s economic security.

“There is a need to seek to maximize the national interest by devising a more detailed response strategy from an economic and security point of view,” Hong said.

The authorities will share trends and news in major countries and related industries in relation to the US call for local chipmakers to share data, he added, and in a timely manner. “In particular, the government will strengthen communication and cooperation with the business community,” he said.

On Oct. 14, the finance minister voiced concerns about the US request during a meeting with US Treasury Secretary Janet Yellen in Washington. Global companies including Taiwan’s TSMC have expressed concerns that trade secrets and customers’ data could be leaked to competitors.

Strategies for fostering and protecting homegrown technology under the global technological hegemony were on the meeting’s agenda, according to the Finance Ministry.

“Securing and protecting cutting-edge technology is emerging as a key issue in global economic security,” Hong said, adding that the topic covered a complex entanglement of areas such as technology, security, industry and commerce.

Amid a widening tech fight between the US and China, he said, Asia’s fourth-largest economy was alarmed to see countries taking steps to restrict foreign access to their technology and domestic markets.

In preparation for the acceleration of technological blockades, participants discussed approaches to the discovery of core technologies with high strategic value, the establishment of a human resources protection system in response to intensified technology hijacking, and technology standardization measures, the ministry said.