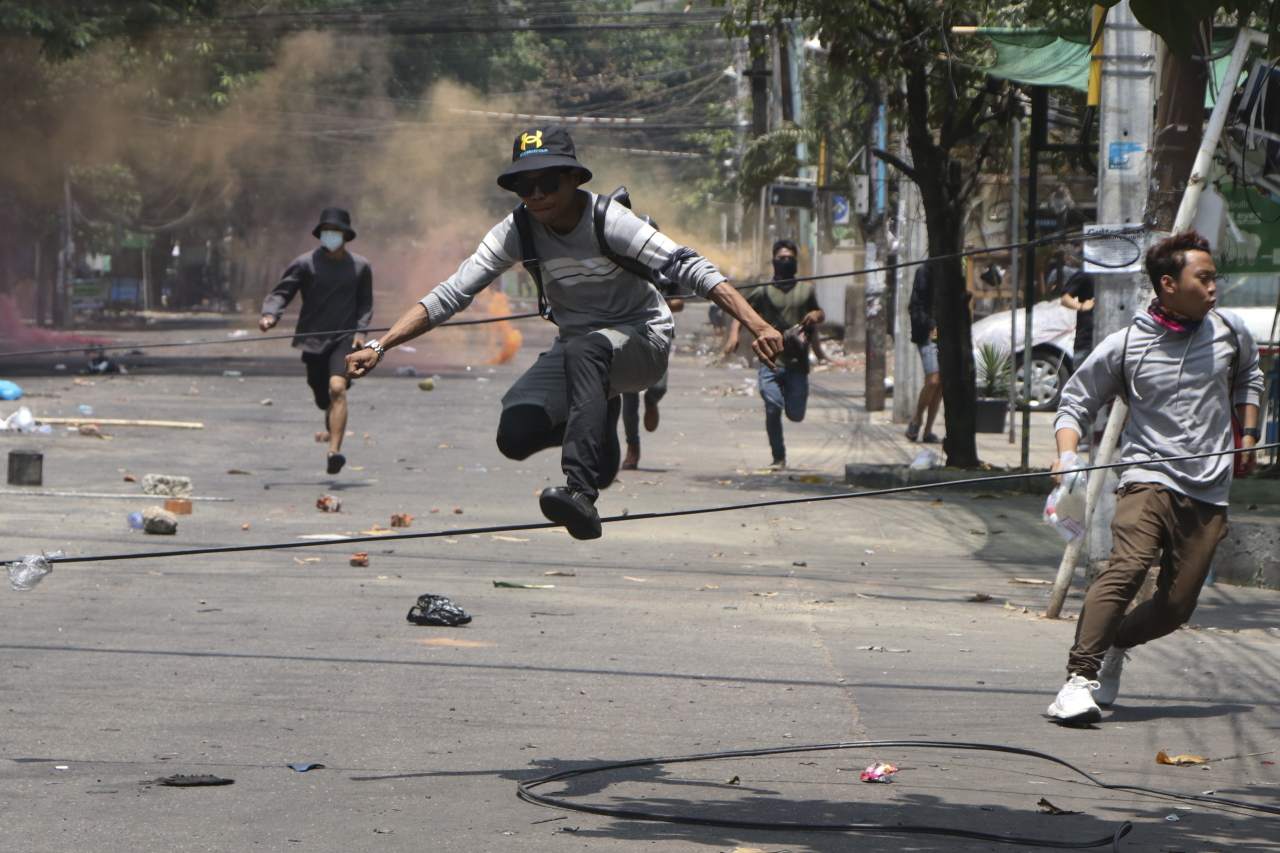 Anti-coup protesters run to avoid military forces during a demonstration in Yangon, Myanmar on Wednesday March 31, 2021. The Southeast Asian nation has been wracked by violence since the military ousted a civilian-led government on February 1 and began to forcibly put down protests. (AP-Yonhap)

An employee at Shinhan Bank’s Yangon branch was shot amid escalating bloodshed in Myanmar, the South Korean lender and a Myanmar-based news outlet said April 1.

The female employee, a national of Myanmar, was shot while heading home in a company vehicle after work on March 31 at 5 p.m. According to reports, she was taken to a hospital in critical condition. The employee’s current condition is unknown.

Shinhan’s branch in Yangon has operated with a minimum number of employees stationed at the building since Myanmar’s military staged a coup Feb. 1.

The bank said it had temporarily shut down the brick-and-mortar branch and ordered all employees there to work from home. It is also reviewing whether to repatriate the bank’s Korean employees.

There are currently three employees of Korean nationality and 33 employees from Myanmar at the Yangon branch, which was established in 2016.

Shinhan denied rumors that the vehicle carried the bank’s logo.

The news is likely to further dampen plans by Korean financial institutions to expand into Myanmar. The country was once touted as “the next Vietnam” after it opened its doors to foreign investors less than a decade ago.

According to industry data, 25 Korean financial institutions are currently operating subsidiaries, branches and offices in the country. Separate data from the Financial Supervisory Service showed that 11 Korean banks were doing business there as of September 2020.

KB Kookmin Bank -- which launched a subsidiary in Myanmar five days prior to the coup -- said all of its employees were working from home as of Thursday and that it planned to follow the Foreign Ministry’s guidance in deciding whether to bring its Korean employees back home. KB currently has four Korean employees working at its office-turned-subsidiary and operates some 20 branches and microfinancing institutions across Myanmar.

Other lenders said they would “closely monitor” the situation or heed the Foreign Ministry’s decision.

All of them hinted that they currently had no plans to completely back out of the market, despite the US’ willingness to continue expanding its economic sanctions against Myanmar.

Since the Feb. 1 coup, more than 510 unarmed civilians have been killed and over 3,000 people detained, according to Myanmar-based rights group Assistance Association for Political Prisoners.