Kakao Bank’s increasing number of users also boosted its earnings in the first half with its net profit standing at 45.3 billion won (US$38 million), nearly five times higher than the 9.6 billion won it posted a year earlier. In the second quarter alone, the net profit came in at 26.8 billion won. 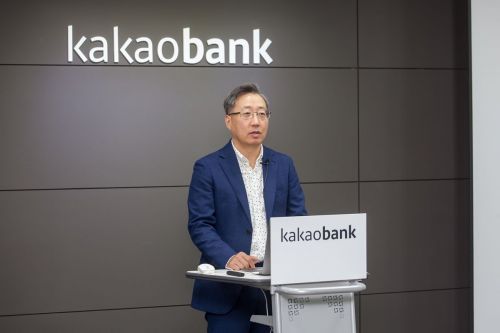 Increased profits from loan services, and partnership expansion in stock account opening and credit card services contributed to the growth in the first half, the online bank explained.

As of June, the number of bank account holders at the bank stood at 12.5 million. The online bank’s app was used by 44.3 percent of the economically active population, a term that describes people aged 15 years old or over who are working or seeking employment. The app was especially popular among those aged between 20 and 40, who comprised 47.6 percent of the users. Because of the new coronavirus pandemic, those in their 50s or older have increasingly opened mobile bank accounts since May, the company said.

“In the latter half this year, Kakao Bank will start preparations for the planned initial public offering to raise funds for further growth,” said an official from the online bank, adding “The company will try to offer a wide range of mobile financial services for customers.”

The bank’s entire assets, including loan balances and savings deposits, stood at 24.4 trillion won as of June, up 1 trillion won from the first quarter.

Joining forces with four local credit card companies, including Shinhan Card and Samsung Card, the bank wholly owned by mobile messenger operator Kakao has issued 260,000 credit cards as of the end of July.