South Korea will allow holding companies of conglomerates to run corporate venture capital units in order to boost investment in startups and invigorate the economy, officials said on July 30.

The government said it will also prepare tools to quell concerns of side effects, such as the excessive influence of conglomerates in the financial sector. 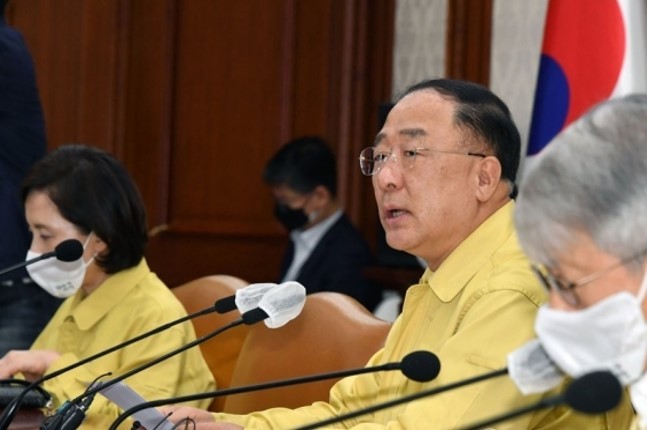 “We will allow general holding companies to own affiliates for corporate VCs,” Deputy Prime Minister and Finance Minister Hong Nam-ki said at an emergency economic meeting in Seoul.

“However, we have prepared a control system to strictly block the side effects of easing the principle of separation of banking and commerce,” he added.

In Korea, corporate VCs refers to units owned by large business groups, that create funds to invest in startups.

Under the principle of separation of financial and industrial capital, the nation had been prohibiting holding firms from having corporate VCs.

Accordingly, some business groups -- such as SK, LG, Lotte, CJ and Kolon -- indirectly have corporate VC units outside their holding firms or in the form of overseas affiliates.

The Fair Trade Commission said it would revise the Fair Trade Act by the end of this year for the conglomerates to own VC units in the form of a wholly owned subsidiary.

According to the watchdog’s plan, corporate VC units can borrow within 200 percent of its equity capital. When creating a fund, external funds can be raised within 40 percent of the amount prepared. Overseas investments will be allowed for up to 20 percent of their total assets.

To prevent the expansion of corporate control through external capital, the government will limit the scope, financing and investment destination of the funds.

The authorities underscored that corporate VCs, in principle, are only allowed to “invest” and should not have other financial dealings.

In particular, investments from financial affiliates and owner family members are prohibited when creating funds. They will also not be allowed to invest in any companies, affiliates or large business groups related to owner families.