Personal mobility startups remain mostly unaffected by the ongoing coronavirus outbreak for the time being, according to industry sources.

Electric scooter-sharing service Kickgoing operator Olulo, with more than 440,000 members, said Wednesday that its personal mobility business has not been greatly affected by the massive COVID-19 crisis.

“Olulo’s service wasn’t much affected as it is a personal mobility service. Rather, it was the weather that had a bigger influence,” Kim Hwan-hee, who is responsible for communications activities of the company, told The Korea Herald. 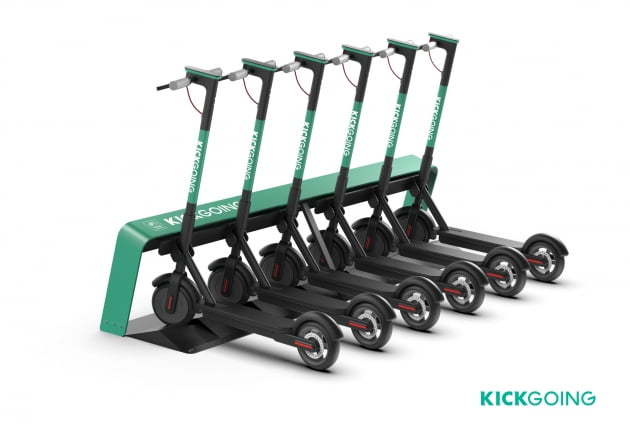 Figures actually showed more correlation with the ups and downs of the average temperature compiled by the Korea Meteorological Administration.

Despite the number of confirmed patients standing at 1,595 as of 9 a.m. of Thursday, it didn’t discourage users from sharing electric scooters.

Between Feb. 3-7 and Feb 10-14, the average temperature rose from minus 3.6 degrees Celsius to above 6 C. The number of Olulo users in that time increased by 15 percent.

Olulo, which currently operates some 6,000 electric scooters, accumulated more than 2.6 million rides as of February since its launch in September 2018, translating into 5,009 rides a day.

Mobility startup Pump, which currently operates some 5,300 XingXing scooters, said users did not decline but only increased amid the outbreak.

“In case of Busan, where climate is always warm in winter, we haven’t seen a change in the number of users.”

Even for other personal mobility services that are less affected by weather, they mostly have been immune to the COVID-19 outbreak for the time being.

SoCar, a mobility platform focused on car-sharing and ride-sharing, said it witnessed minor changes in the number of users during the outbreak.

“People eventually have to go somewhere, so they are using personal mobility platform like SoCar,” said Yoon Na-young, a public relations official for SoCar.

According to the company, the number of users showed daily ups and downs of 1 to 2 percent since the outbreak. Van-hailing service Tada, owned by SoCar, showed a similar trend.

In response to the constant flow of customers, each service has taken extensive hygiene measures.

Olulo CEO Choi Young-woo announced hygiene measures on Jan. 29, including disinfection of handles, brakes and sensors where most contacts are made.

XingXing is currently taking disinfection measures by spraying ethanol on parts including handles every time it changes the batteries of scooters, which typically last four hours.

SoCar announced Tuesday that its vehicles, which had been cleaned once a week, will now be disinfected twice a week.

Tada said on the same day it made drivers wear masks on a mandatory basis and placed hand sanitizers in all vehicles.

While personal mobility services remain intact amid the outbreak, public transportation has been dealt a huge blow.

According to Seoul Metropolitan Government and Seoul Metro, people who took buses and subways plummeted in lockstep with the spread of the virus.

Meanwhile, the average number of users of city buses in Jan. 29-Feb. 21 dropped 6.5 percent on weekdays, 9.9 percent on Saturdays and 8.3 percent on Sundays compared to Jan. 1-15, before the Lunar New Year holiday.