The court said in a ruling that Tada is seen as an “innovative mobility business” that cannot be categorized based on the existing transportation business frame.

“Tada service is operated based on a contract agreed by a user who makes minute-based reservation for one’s convenience,” the ruling read.

The court stated Tada as a “rent-a-car service based on the mobile application,” dismissing the prosecution’s earlier opinion that Tada users are not hirer of the service but the passenger, and that therefore it is an “illegal call-taxi service.”

The ruling also said that even if Tada was to be considered illegal, it cannot be seen that it was upon the intention of the two CEOs to violate laws.

Regarding the operation of Tada, the court cited evidences that neither the Transport Ministry nor Seoul Metropolitan Government took administrative measures or conduct crackdown on the service.

“It will become a learning effect for players in the mobility industry including taxi drivers to discuss together for a constructive solution regarding the issue,” the court said, also mentioning the fact that Seoul’s taxi sales have increased last year despite the operation of Tada. 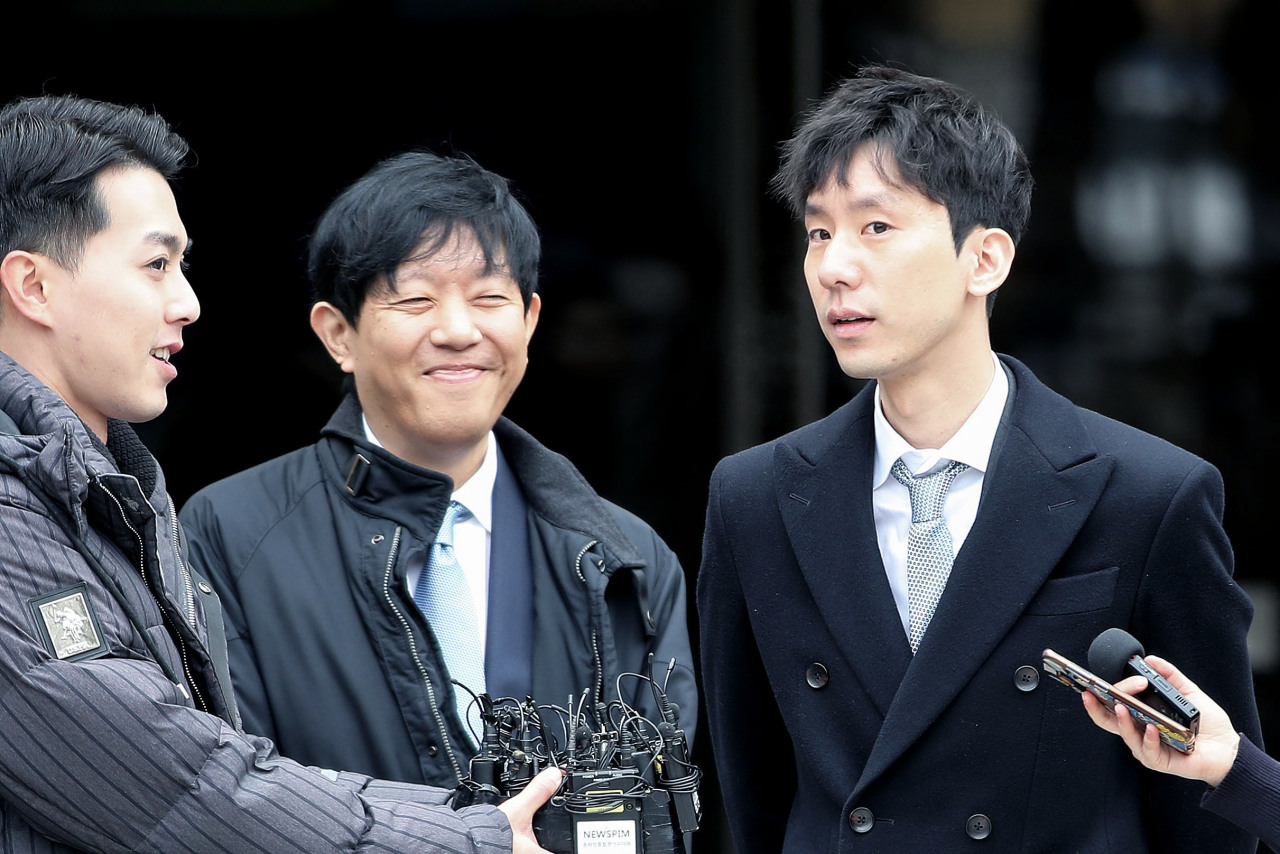 Socar CEO Lee Jae-woong (second from left) and VNCN CEO Park Jae-wook (third from left) speak to reporters as they walk out of the Seoul Central District Court on Feb. 19. (Yonhap)

After the court’s judgement, Socar CEO Lee Jae-woong wrote on his Facebook, “Tada is not guilty and the innovation is the future.”

He added he will “think about cooperative measures with taxi industry to make mobility ecosystem better.”

He said that Tada will be separated from its parent company Socar to make new economy, model and rules.

Socar also released a statement immediately after the judgement and said that “the court chose the way to the future. Tada, which dreamt of an innovation within legal boundary, will continue to run towards the sustainable future.”

Prosecutors, meanwhile, said it will closely review the judgement ruling to decide whether to appeal.

The decision is also expected to rekindle the wave of protests from taxi drivers, particularly ahead of the April 15 general elections.

Last week, the prosecution sought for one-year jail term and a fine of 20 million won each to two CEOs.

The prosecutors argued that Tada has been illegally operating taxi services using the 11-seat rental minivans –- Kia Motors’ Carnival -- without obtaining a license from the Transport Ministry, noting customers regard themselves as passengers.

But the VCNC has argued that Tada operations are within the ambit of current laws, namely the Transportation Act’s Article 18, which allow rental car businesses to offer driving services for large vehicles.

Unlike predecessors such as Uber and Kakao Mobility, which eventually withdrew or reached an agreement with the taxi industry, Socar CEO Lee has refused to back down, arguing that the service is legal.

The National Assembly also joined the fray, with the Democratic Party lawmakers led by Rep. Park Hong-geun authoring a revision bill to the transportation law in October to tighten chauffeur services allowed for car rental businesses, which out ultimately ban Tada’s operation. The bill, currently pending at the Assembly, suggests renting a van that can sit more than 11 to 15 people should be limited to less than six hours. The rental place should be also limited to either airport or port, according to the amendment.

Such moves were countered by the country’s startup industry.

The country’s 280 startup company CEOs have submitted a petition to the prosecution to appeal to them that the innovation that Tada has achieved cannot be considered as a crime.

Some 16 startup and venture associations also filed a petition asking for the prosecution to allow Tada “for sake of innovation.”

Launched in October 2018, Tada has garnered an accumulated 1.25 million registered users on the app over a year, while the outsourced Tada drivers is around 9,000.