Line, the opeartor of the most popular mobile messenger in Japan, is facing criticism for allowing mobile stickers that insult President Moon Jae-in in its messenger store, despite guidelines banning attacks on a particular person.

The sticker set called “Stamps of Mr. Moon,” created by Mineo Mine, consist of distorted caricatures of Moon accompanied by speech balloons that appear targeted at the ongoing political and economic spats between Seoul and Tokyo. Speech balloons included “Termination,” “Promise? What is that?” and “I’m sane,” in Japanese. 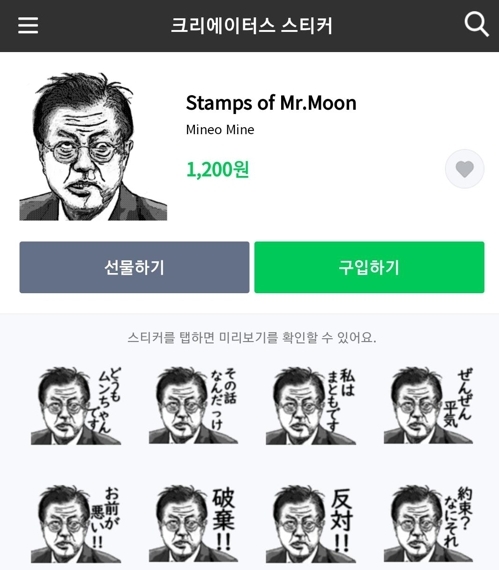 The content was sold on Line’s Creators Market but the company took down the set on Aug. 28 after receiving complaints from some users.

The makers and sellers of stickers can only sell stickers they have created once they have been approved by the Line Creators Market review process. The Moon sticker set was approved even though Line’s Creators Market guidelines say “images that may slander, injure or attack the reputation of a particular person, legal entity, nationality or group" have a good chance of getting rejected.
“This content was not, somehow, screened during the process,” a Line official said, adding that the company is currently reviewing the issue. “We’ll strengthen our screen process to prevent recurrence.”

Line is an affiliate of Korean internet giant Naver, which owns 72.64 percent of the mobile messenger company. Line had more than 187 million monthly active users globally as of June, including 81 million in Japan and 21 million in Taiwan.