Tada Premium gets approval amid controversy

VCNC, the operator of van-hailing service Tada, said on June 11 that its premium taxi service has been approved by the Seoul Metropolitan Government.

Plans for launching the high-end platform Tada Premium were first announced in February in the midst of conflict between South Korean taxi operators and car-hailing services.

“This is a win-win situation that puts priority on customer experience while also improving the quality of taxi services (for customers),” VCNC CEO Park Jae-uk said in a statement.

“We will continue to come up with differentiated models by listening to the taxi industry, users and government.” 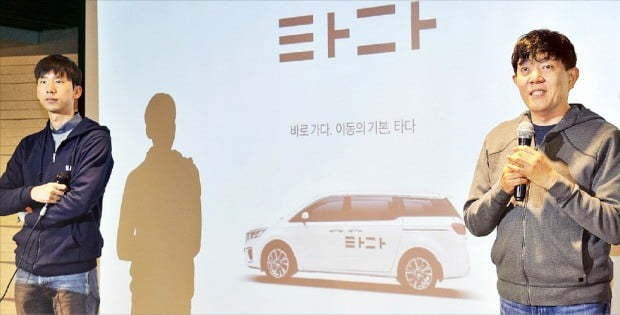 Lee Jae-woong, CEO of Socar (right), and Park Jae-uk, CEO of VCNC, a subsidiary of Socar, answer questions on Tada Premium service during a press conference on February 21.
Socar

Services such as Kakao Carpool and Tada -- launched in the second half of 2018 -- have been facing fierce opposition from cab drivers who say the new business models are a threat to their livelihood. Since then, the two sides have been searching for ways to co-exist with the taxi industry.

Despite the protests, VNCN said in February it would begin Tada Premium services with 100 taxis, with plans to increase the number to 1,000 by the end of this year. It also said that the premium option, which will appear on its app, would motivate taxi drivers to join because they can charge about 30 percent more than regular Tada services.