[THE INVESTOR] Ant Financial, an affiliate of Chinese e-commerce giant Alibaba, said on Nov. 14 it will continue to focus on helping merchants and small and medium enterprises, implement blockchain technology and boost tie-ups with global partners in order to expand its reach globally.

The Hangzhou-based firm operates Alipay, one of China’s most popular mobile payment systems with more than 700 million active users, about half of the country’s population. Consumers connect their bank accounts to Alipay and make payments by scanning the merchant’s QR code at the stores. 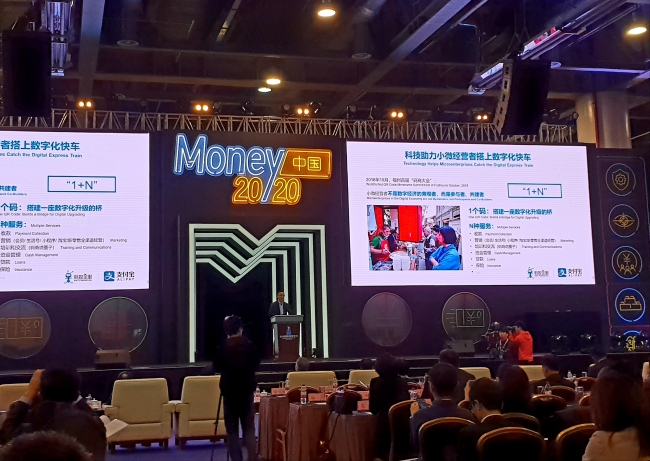 “Technology can help SMEs catch the digital express train,” said Executive Chairman and CEO Eric Jing in his keynote address at Money 20/20 China, the world’s largest fintech and payment conference that made its debut in the country on Nov. 14.

“QR codes build bridges between small merchants and the digital economy. They connect merchants to the Alipay platform where they can interact with peers across the country to share their business experience, while offering more services to customers.”

Besides collecting payments, Jing underlined Ant Financial’s other key services, which include medical insurance programs and loan services for easy and cheaper access for merchants and farmers. He described the service as “310 model” -- it only takes three minutes to apply for loans and less than one second for approval, all procedures done without human staff. So far, Alibaba-backed digital bank Mybank has provided more than 2 trillion yuan (US$287.74 billion) in loans to more than 11 million micro enterprises, according to the firm.

Jing added the fintech giant is exploring further uses of budding blockchain technologies that will be deeply integrated into Ant Financial’s service and products.

“From our observation, blockchain is a grand new and useful trust mechanism for the financial world and a new business model,” he said, adding that the firm will work on developing true applications of blockchain that will affect the real economy -- such as remittances and money transfers -- and not ICOs and virtual coins.

Going forward, Jing stressed the firm’s plans to bolster partnerships with leading payment partners around the globe, especially focusing on emerging markets in Asia, in a bid to expand its reach beyond its core market of China.

Its partners include Paytm in India, Kakao Pay in Korea, Ascend Money in Thailand, Mynt in the Philippines and Dana in Indonesia, among others, with plans to expand in the future.

The first Chinese edition of Money 20/20 runs through Nov. 16 at the Hangzhou International Expo Center.