[THE INVESTOR] Samsung Electronics is ready to become a first-mover in ushering in the new era of fifth-generation network systems with 5G network equipment technologies that sit above the competition, according to the chief of Samsung’s network equipment business.

“Right now, Samsung is really becoming a ‘first-mover’ in 5G, a technology that will bring new value to the world,” Kim Young-ki, head of Samsung Electronics’ network business division, said in a press conference Friday at the tech firm’s headquarters in Suwon, Gyeonggi Province. 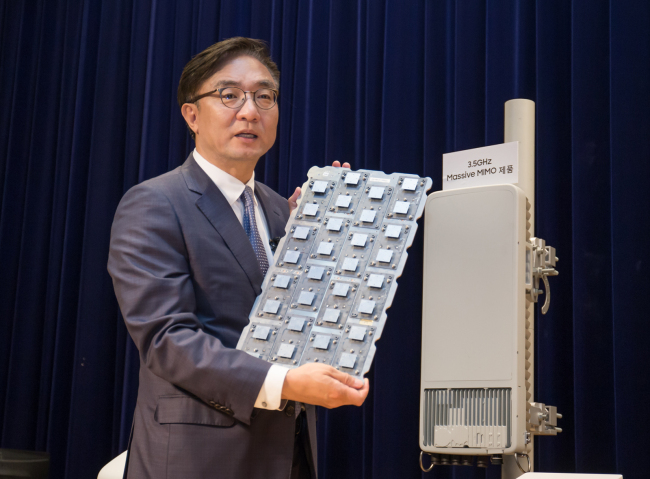 The Korean tech titan will strive to take over 20 percent of the global 5G equipment market by 2020, Kim said. He had already set the goal at the Mobile World Congress in February.

At the core of Samsung’s competitiveness is its mastery of complex technologies required of a viable 5G network, which operates in a new spectrum of ultra-high frequency bands -- such as the 28 Gigahertz and 3.5 GHz millimeter wave bands.

According to the chief, Samsung’s technical specialty lies in the development of complex 5G network gear for the 28 GHz band, where 800 megahertz of bandwidth are used to achieve a throughput (maximum speed) of 10 gigabytes per second.

This is achieved through radio frequency management technologies called Multi-Input Multi-Output and beamforming. Together, they inject new capacity into a network without having to buy more spectrum or add new base stations, and form the foundation of 5G.

In the case of Samsung, it utilized 1,024 antennas to create a multi-MIMO system for the 28 GHz band, to drive up connection speeds to meet 5G specifications. And this equipment will be going live in the US within the year.

“A technology that can handle a bandwidth as wide as this and achieve a throughput of 10 Gbps is what should truly be considered as 5G technology,” said Kim. “And it’s important to note that this is a technology that is not undergoing tests, but is set for (imminent) commercialization.”

In January, Samsung Electronics signed a deal to supply US telco Verizon with the world’s first-ever 5G Fixed Wireless Access network solutions running on the 28 GHz band, designed to bring 5G services inside homes. Deployment to Verizon is set to formally begin in the third quarter of this year, Kim noted.

He also expressed confidence in Samsung’s ability to provide top-notch network gear for the 3.5 GHz band -- the primary band on which Korean telcos are planning to deploy their 5G services.

According to Kim, the 3.5 GHz band has a lower technological ceiling than that of the 28 GHz band. On the 3.5 GHz band, the bandwidth used to achieve a stable 5G connection drops from 800 MHz to 100 MHz. The number of antennas required for Massive MIMO drops from 1,024 to 64.

“Since we’ve already broken the (higher) tech ceiling required to achieve a stable 5G network in the 28 GHz band, we have no doubts in our ability to provide top-quality products in the 3.5 GHz band,” he said.

The 3.5 GHz band is particularly important for Samsung’s business in Korea, as it is the band on which local telcos are planning to deploy nationwide commercial 5G networks. And eyeing this market has been not only Samsung, but also China’s Huawei, which has been eying deals in the 5G space.

Whether Samsung will become the primary 5G equipment vendor to Korean telcos is uncertain, as its Chinese rival Huawei is said to have made attractive pricing propositions. But Kim believes clients have a good reason to choose Samsung in the end.

“I think (Korean telcos) will select a vendor with which (they) can cooperate to create new 5G-enabled services and (which) is able to actively address new needs. And in Korea, I don’t think there’s any player better than Samsung that can deliver such goals.”

If all goes as planned, Korea is expected see a nationwide 5G network up and running by March 2019.

Looking ahead, Kim expects Samsung’s network business division to continue recording robust growth on the back of continued demand for 5G network equipment.

“Samsung’s network business division has been recording two-digit growth annually. I expect it will be the same this year and next year,” the executive said.

During Friday’s press tour, Samsung unveiled various network equipment it has delivered for 5G delivery in person. It also held demonstrations to show 5G’s use in the real world, including no-latency connection inside crowded stadiums and smart cities enabled via the internet of things technology.