[THE INVESTOR] The history of inter-Korean economic cooperation over the past 30 years is a long and sorry tale. The cycle of optimism and disappointment has repeated over and again.

Hopes are on the rise once again following summit talks between North Korea and the US. 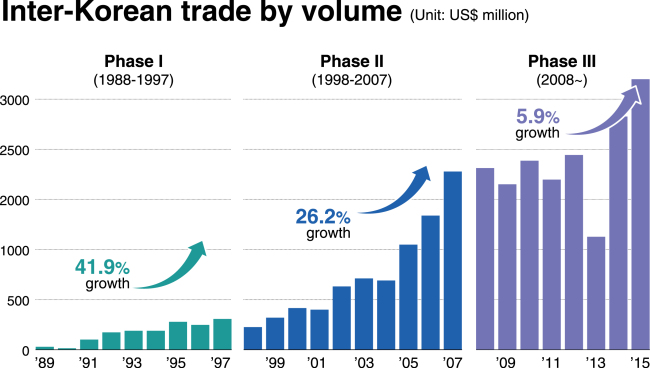 Global firms and investors are turning their collective eye to potential business opportunities in the communist country, East Asia’s last untapped growth market. South Korean firms may have an advantage considering their geographical and cultural proximity, but they have also learned from the past about associated risks.

In 1988, then-President Roh Tae-woo announced the July 7 Declaration that defined the North as a partner, not an enemy, for the Korean Peninsula’s prosperity. Talks about cultural and economic exchanges started for the first time. The concept of “inter-Korean” trade was also born during that period.

The two Koreas started trade in the next year, with the South importing artifacts from the North. In the same year, now-deceased Hyundai Group Chairman Chung Ju-young became the first South Korean businessman to visit the North and pave the way for the group’s North Korean business.

Related talks, however, lost momentum after the death of then North Korean leader Kim Il-sung, grandfather of the incumbent Kim Jong-un, in 1993 and the North’s abrupt exit from the Treaty on the Non-Proliferation of Nuclear Weapons in 1994.

Some projects were resumed later in 1994 when the US and the North signed the Geneva Agreed Framework to freeze the North’s nuclear program. But hit hard by the financial crisis in the late 1990s, little progress was made in the talks.

Under President Kim Dae-jung’s policy of engagement, or Sunshine Policy, toward the North, the South Korean government resumed economic cooperation in 1998. It was also in that year the Hyundai chairman visited the North via the Demilitarized Zone with a herd of cattle.

Cross-border tours to the Mount Kumgang resort also started in the year, attracting more than 1 million tourists from the South until the program was halted in the wake of a North Korean guard’s shooting to death of a South Korean tourist in 2008.

The first inter-Korean summit took place on June 15, 2000. Following the talks, the South launched several economic exchange projects, including a large-scale aid program to the North. In the same year, Hyundai also decided to set up the joint-venture Kaesong industrial park in the border city, where South Korean firms could hire North Korean employees to operate production plants at cheaper costs. 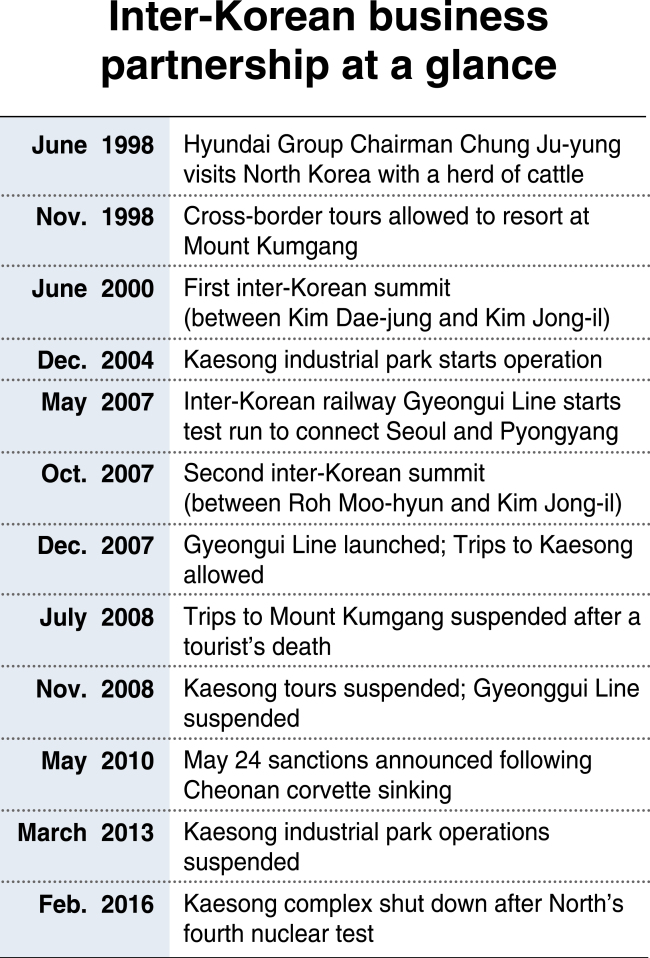 After the death of the Hyundai chairman in 2001, the South Korean government played a leading role in operating the complex. The first products were stainless steel pots produced by medium-sized kitchenware maker LivingArt in December 2004.

The reconciliation mood didn’t last long after the conservative Lee Myung-bak government was launched in 2008. Mount Kumgang tours were suspended following the death of a South Korean tourist in a shooting by a North Korean guard.

After the Cheonan corvette sinking in 2010, the South announced the May 24 economic sanctions, which involved a ban on new investments into the Kaesong industrial park and more than a 50 percent cut in the number of residential workers there.

Even after the inauguration of the Park Geun-hye government in 2013, there was no progress made in the stalled talks. A series of nuclear tests by the North led to the suspension of the Kaesong complex in 2013 and its shutdown in 2016.

Since then, all inter-Korean trade has been halted. Last year, the trade volume was less than US$1 million, compared to the US$1.8 billion of 2007.