[THE INVESTOR] Soon after North Korean leader Kim Jong-un crossed the border to enter South Korea on April 27, every move of his was watched keenly. His penmanship was no exception.

He jotted down a message in a guest book upon his arrival at Peace House where the historic summit with President Moon Jae-in was held.

“A new history begins now. At the start of history and an era of peace,” he wrote. 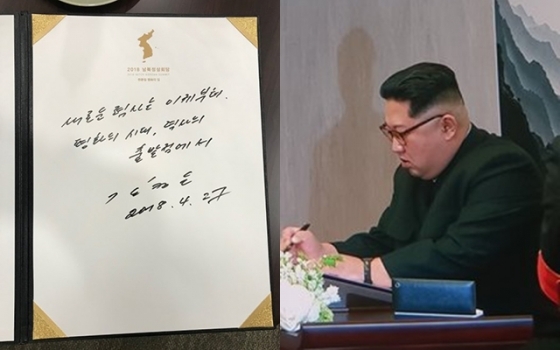 “His speedy writing style shows he is very smart but impatient at the same time,” said Koo Bon-jin, a typographist and lawyer. “Those who write fast tend to be a bit sloppy.”

He also pointed out that Kim’s penmanship bears a strong resemblance to that of his grandfather Kim Il-sung and father Kim Jong-il.

“Like his father and grandfather, he has a sort of stiff writing style," Kim said. "This is also similar to that of President Donald Trump. People with such penmanship are usually willing to take challenges, but somewhat self-centered."

“Also, there is some inconsistency in his writing. For example, the shape of O differs in every word. This shows his sometimes impulsive and haphazard personality but it is also predictable in general."