[THE INVESTOR] When it launched a bitcoin exchange in January 2014, blockchain startup Coinplug was well aware of the volatility of the cryptocurrency market.

Bitcoin had hit US$1,000 for the first time in history a few months earlier, and the price had risen by tenfold in the span of less than a year. 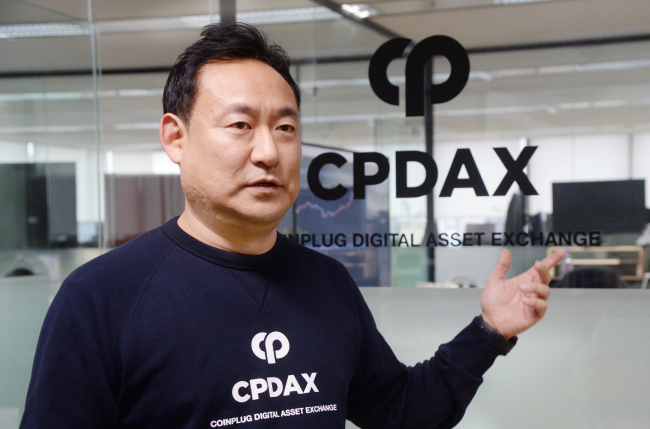 The company also witnessed Mt. Gox, then a bitcoin exchange powerhouse based in Japan, plummet from handling some 70 percent of all bitcoin transactions worldwide to filing for bankruptcy, mainly due to missing and stolen coins of customers, worth some US$450 million.

The event, however, left Coinplug unfazed and inspired, as it meant that the first-generation blockchain company could play a role in warding off security threats with its technology know-how in the expanding cyber currency market.

“(A series of occasions) taught us the danger of virtual currency,” said Richard Yun, chief operating officer and founding member of Coinplug, in an interview with The Korea Herald.

“But we found the blockchain technology itself charming. It gave us a lot of options in (Coinplug’s) future business.”

Since then, Coinplug has striven to establish and commercialize blockchain security platforms, such as authentication systems, global remittance platforms and single sign-on solutions, by teaming up with financial firms.

These stem from the startup’s original technologies, including a private blockchain platform called Fidoledger and multisignature algorithm, Yun explained.

In November, Coinplug unveiled a blockchain-backed single sign-on portal for Hyundai Card, which gives users access to separate apps by the credit firm with a single log-in.

Private blockchains, which techie Yun called “blockchains for enterprises,” enable clients to process financial transactions -- about 3,000 transactions per second -- as fast as traditional banks, which would have otherwise been impossible on public blockchain platforms with ledgers distributed worldwide, Yun said.

“Customers of a financial service will unwittingly have their information protected by (Coinplug’s) cost-effective blockchain platform,” he said.

In the future, Coinplug seeks to launch an overseas remittance business Through a joint venture, SBI Cosmoney, formed with Japanese group SBI. The startup has also discussed providing open payment solutions to countries in Southeast Asia with an aim to launch next year.

“To build infrastructure from scratch costs a bulk of money,” he said, adding blockchain would significantly cut costs.

CPDAX, launched in September this year, features the Fidoledger platform as well as the startup’s original fraud detecting system for enhanced security.

As of Dec. 5, the security system received the A+ grade on a security test by Observatory by Mozilla, a nonprofit project designed to help developers and security professionals. Observatory by Mozilla assesses over a dozen security technologies on a website. Only the top 0.01 percent of the top 1 million websites, presented by web analysis provider Alexa, had managed to get the A+ security level as of June 2017.

Along with the 46-year-old Yun, Coinplug’s founding members, Chief Executive Ryan Uhr and Chief Technology Officer Jay Hong, were colleagues at ExiO Communications, a startup developing in-building, wireless technologies for corporate networks, which was acquired in 2000 by American tech giant Cisco Systems in a US$165 million deal.

In November 2013, a month after Coinplug was founded, the members received seed money of US$400,000 -- half of which was in bitcoin. The startup was granted Series A funding worth 2.5 billion won (US$2.3 million) in October 2014 and Series B funding worth over 5 billion won in September 2015. Coinplug is now eyeing Series C funding by January next year.