[THE INVESTOR] A 9.1 kilogram weight drops 61 meters onto a battery placed on an iron rod. When the weight hits with a dull thud, the battery was crushed but it didn’t catch fire or explode.

Various battery and smartphone tests are carried out at 640,000-square-meter LG Digital Park, workplace for around 10,000 employees manufacturing the company’s products from smartphones to home appliances and auto components. 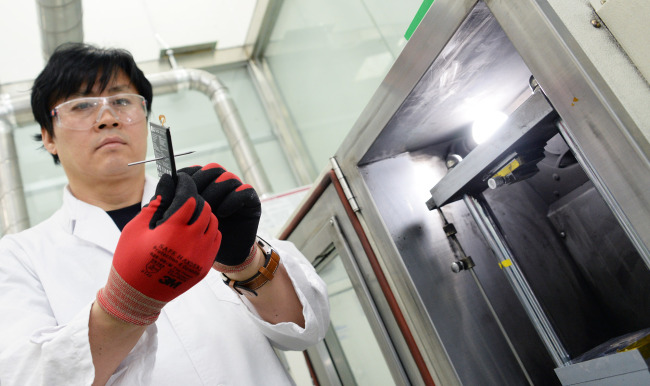 “We are testing the quality of the G6 more rigorously, as consumers’ concern about safety is on the rise,” Lee Seok-jong, chief of LG’s mobile communications global operation group, told reporters invited to LG Digital Park Friday.

Inside a battery evaluation lab in the LG Digital Park, employees carry out tests to verify the safety of batteries in terms of shock, pressure, penetration, heat and flammability.

A battery lab staff member conducted a nail penetration test, in which a sharp nail is driven into the center of a battery. The battery endures its ordeal without breaking apart. The test is carried out to guarantee customer safety even when a pet bites the battery.

The employee also put a battery into fire to make it explode. This test was carried out to check measures to stop debris from flying in extreme cases when a battery explodes. The test is passed when the debris is kept within a certain distance. 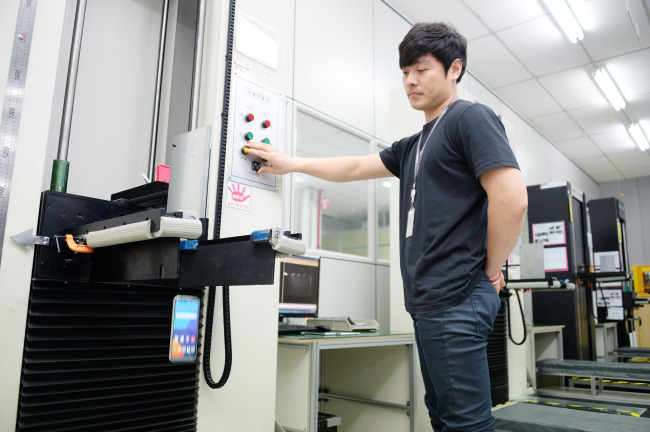 LG Electronics employee carries out a falling test of LG G6 to inspect the product’s structural problem when there is an impact on the smartphone.

“A battery is like a bomb. We do these tests to prevent injuries to people even if the battery explodes,” said Kim Sung-woo, a chief engineer of LG’s product test lab.

Getting out of the battery inspection lab, we moved to the four-story, 20,000-square-meter G2 building where premium smartphones including the G6 are produced. On the fourth floor, we wore gowns and shoes to stop dust from entering the final assembly line, which also conducts inspection and packaging.

There were 14 assembly lines and each assembly line is 36 meters long. Employees -- mostly young and female -- make final tests of smartphone functions including waterproof, communications, display and sound.

A few meters away from the assembly line, there was production safety line where employees conduct tests on the G6. They drop G6 phones from a height of one meter -- a typical height if the phone is dropped by an adult user -- on steel, wood and carpet floors. In order to see damage to appearance and functions more clearly, they monitor the process through cameras installed on the floor.

Kim Guen-heung, LG’s chief of product development unit, said, “We are doing the tests solely from the perspective of consumers. As G6 is globally launched, we are testing the product more than six months during the development stage.”

LG G6, which was launched on March 10 in Korea, will go on sale in North America early next month.