Will Samsung, Hyundai clash over robots? 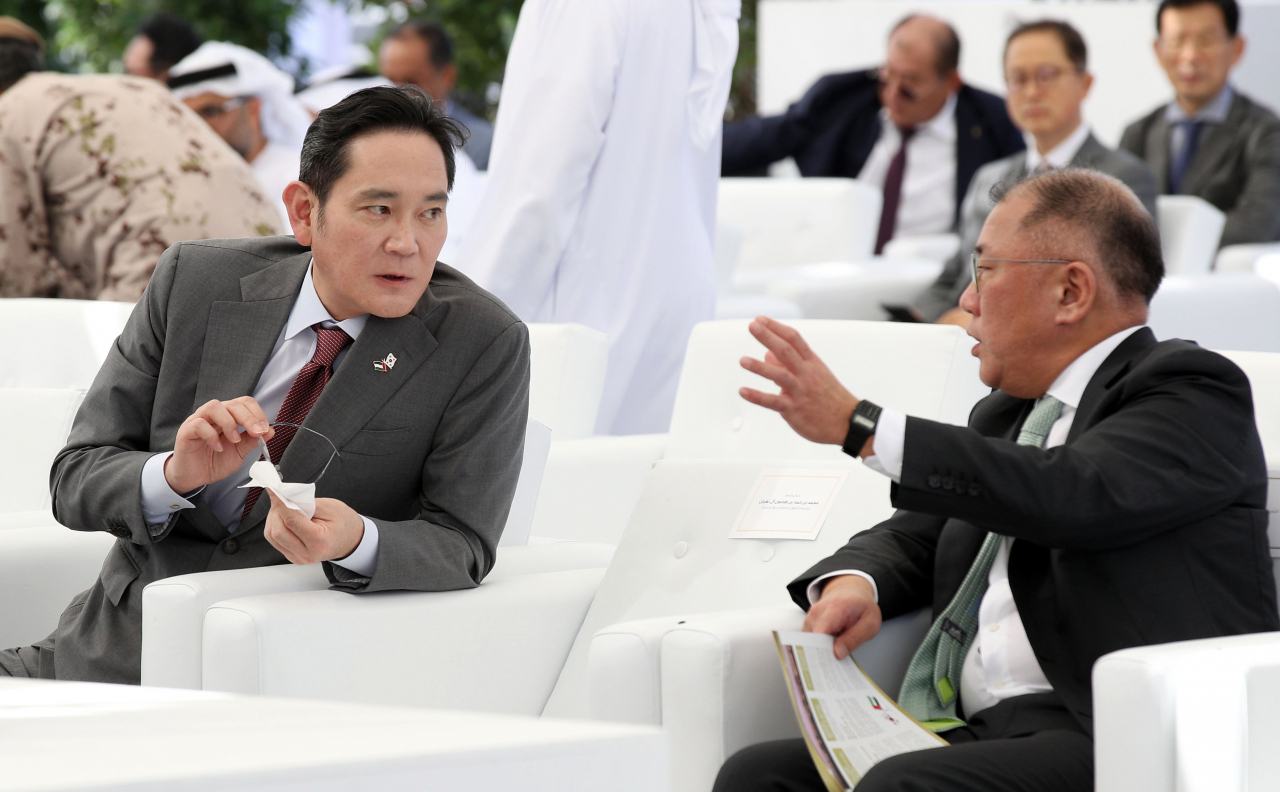 South Korea’s two major conglomerates, Samsung and Hyundai, have long been keeping their distance as they avoid competing head-on in their core businesses. But the decades-old unspoken rule may be ending in robotics, a burgeoning area where their leaders are pouring resources in search of a future growth driver.

Hyundai Motor Group, the world’s third-largest carmaker dominating almost 90 percent of car sales at home, was the first to make a big move by acquiring a 80 percent stake in Boston Dynamics, one of a handful of companies that make bipedal human-like robots, in an $880 million megadeal in 2021.

US-based Boston Dynamics is best known for its four-legged robot dog Spot. Hyundai has already test-run a version of the robot dog for safety control at a Kia plant, with plans for a wider adoption at its workplaces around the world.

At the time of the acquisition, Executive Chair Chung Euisun also shelled out 240 billion won ($194 million) out of his own pocket to secure an additional 20 percent stake in the company, renewing his will to nurture his automotive empire into a leading player in futuristic mobility solutions.

Chung, who took the top seat in 2020, also launched a separate task force called Robotics Lab in 2019. The lab has developed a series of wearable robots including Vex and Cex, which factory workers can wear to protect their muscles and improve work efficiency in doing repetitive tasks.

“The wearable robots are not on the market yet, but we are collecting feedback from employees on a pilot test,” said a Hyundai Motor Group official. “We plan to make upgraded versions this year.”

Hyundai Rotem, a heavy industry manufacturer specializing in railways and defense vehicles, is in charge of the production, the official added.

“Hyundai has a competitive edge in building hardware, which is a more essential part of robots than software. Together with Boston Dynamics, the carmaker is expected to seek to bolster its software prowess, especially in artificial intelligence,” said Han Jae-kwon, a robotics engineering professor at Hanyang University Erica Campus.

In the meantime, Samsung Electronics’ robotics ambition is still under wraps. But its recent stake purchase in a local humanoid robotics company, Rainbow Robotics, offered a sneak peek.

Earlier this month, Samsung purchased a 59 billion won stake in the company, becoming its second-largest shareholder. The Seoul-based company was founded in 2011 by a research team at the Korea Advanced Institute of Science and Technology. It turned a profit for the first time in the third quarter last year, largely driven by sales of service robots used in restaurants and factories.

When asked about the purchase at the Consumer Electronics Show in Las Vegas, Samsung’s co-CEO Han Jong-hee denied putting too much emphasis on it, but investors reacted explosively. Since the stake sale was announced, share prices of Rainbow Robotics almost doubled to some 61,000 won in just two weeks.

“Historically, Samsung has overcome its weakness through mergers and acquisitions and by forging partnerships,” said Han, the professor. “When it comes to robot manufacturing, Samsung is less experienced than Hyundai. But its competitive edge in software is expected to create synergy with the hardware-focused Rainbow Robotics.”

An industry source familiar with the stake purchase added that their partnership is likely to advance the market debut of Samsung-made robots.

“Samsung is expected to reduce the earlier risks of its nascent robotics business. Another boon for Samsung is that Rainbow Robotics produces most of the parts on its own, which means cheaper production costs,” the source said on condition of anonymity, adding, “It is also likely for Rainbow Robotics to produce customized robots solely for Samsung.”

The robotics push made by Samsung and Hyundai is being closely watched because of the huge industrial potential. Assistant robots are increasingly being adopted to help reduce labor costs, with the global market estimated to reach $53 billion by 2025. Robots are also expected to play a key role in production plants in the future, as countries are bringing production facilities back home amid escalating geopolitical risks.

Another promising field is health care, which is highly likely to be the initial battlefield of Samsung and Hyundai robots.

At the CES, the Samsung CEO hinted that the company plans to launch EX1, a physical assistant robot, this year. Sources predict the upcoming robot could be based on an earlier prototype, called GEMS-H, which supports fragile hip joints for elderly people.

Hyundai’s own assistant robot MEX is also waiting for a green light from the US Food and Drug Administration, with plans to launch the robot globally.

“Wearable robots can be a test bed before Samsung and Hyundai launch humanoid robots,” Han added.

With tensions simmering between the two chaebol rivals, industry watchers predict that their renewed rivalry would help expand the market and spur innovation.

“Their predecessors focused on becoming the No. 1 in chips and cars, respectively,” said Oh Il-sun, head of chaebol tracker CXO Institute. “But in order to survive the wave of the Fourth Industrial Revolution, the current leaders are adopting two-track strategies – doing better what they are already well and becoming the first movers in innovative and futuristic sectors.”

Samsung and Hyundai have maintained friendly ties since Samsung left the automotive market in the financial crisis in the late 1990s. Samsung had sought to acquire then-bankrupt Kia Motors to boost its ailing automotive business, but failed to do so. Instead, Hyundai succeeded in acquiring the smaller rival, paving the way for it to expand its market share at home and make a foray into overseas markets.