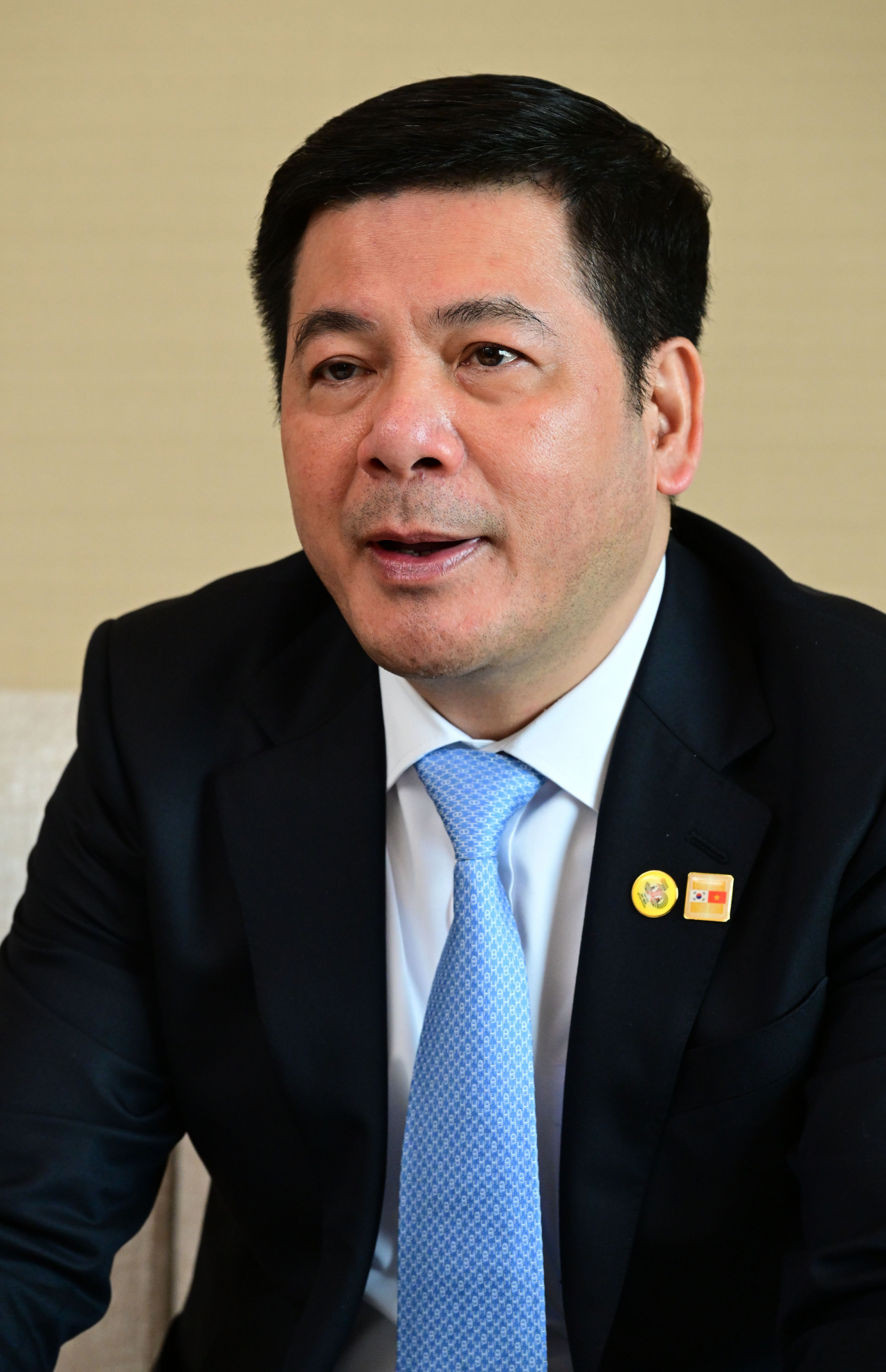 Nguyen Hong Dien, Vietnam’s minister of industry and trade, on Tuesday urged South Korea to invest in clean energy and mineral resource development, in a step toward strengthening the two countries’ bilateral ties.

“In a few weeks, Vietnamese government will approve the country’s long-term eight master plans centering on renewable energy. We hope South Korean companies invest in mineral resource development here, that is essential to the energy industry,” the minister said during an interview with The Korea Herald and Herald Business at Lotte Hotel in central Seoul.

The minister stressed that two of the three memorandums of understanding signed by Vietnam’s Ministry of Industry and Trade and South Korea’s Ministry of Trade, Industry and Energy were related to energy and resource development.

The first memorandum stated the two countries will strengthen cooperation on investment and technology development of critical minerals or nonfuel minerals. Both agreed on establishing a stable system for supply and demand and a joint supply chain as well.

Vietnam is the second largest source of rare-earth elements such as cerium, which are mostly found in the earth’s crust. It is also the third-largest source of tungsten, rare metal that has the highest melting point of all metals.

With South Korea’s outstanding technology in mining and refining, the two countries have huge potential for cooperation, according to Korea’s Industry Ministry.

In the memorandum on electric power, the two agreed to work on carbon-free ammonia combustion technology. It also stated that both will partner up for the renewable energy sector, especially for developing offshore wind power.

“As for clean energy, Vietnam is considering developing nuclear power – which was put on hold back in 2018,” said the minister. “Nuclear power is also a vital energy source for wind power and solar panels.”

Aside from energy and resource development, the minister said the country is focusing on expanding materials components and equipment industry.

He also called for active investment from Korean companies, citing the deepening diplomatic and economic cooperation between Asia’s fourth-largest economy and the emerging country.

“Earlier in the day, the Vietnamese president declared that South Korea and Vietnam had upgraded their diplomatic ties to the highest level. In trade volume, the two countries posted some $80 billion as of November, and are expected to record $90 billion by the end of this year and $100 billion next year.”

The minister pledged to actively communicate with some 9,000 South Korean companies -- including Samsung Electronics, Hyundai Motor Group and Daewoo E&C -- and address any grievances from them while doing business in Vietnam.

On Monday, South Korean President Yoon Suk-yeol and Vietnamese President Nguyen Xuan Phuc issued a joint statement saying that the bilateral relationship between the two countries will be upgraded from the previous “strategic cooperative partnership” to the highest level of “comprehensive strategic partnership.”

Nguyen who took office as industry minister in April 2021 visited South Korea from Sunday to Tuesday together with the Vietnamese president, Planning and Investment Minister Nguyen Chi Dung, and other ministers and government officials to commemorate the 30th anniversary of bilateral diplomatic ties.

This is the third time that Nguyen has visited Korea this year. South Korean Industry Minister Lee Chang-yang is scheduled to visit Vietnam this month to discuss measures to facilitate bilateral economic cooperation.