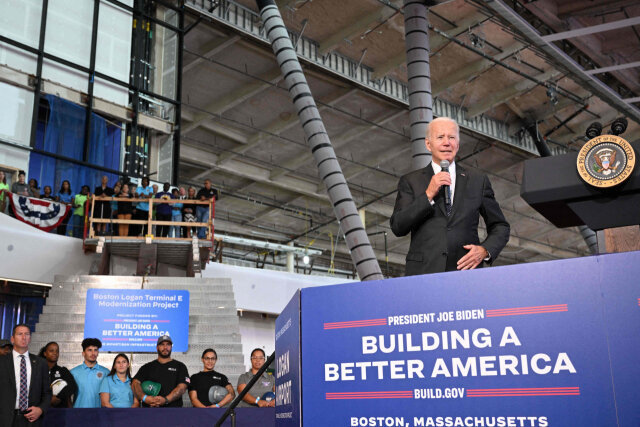 US President Joe Biden delivers remarks on his Bipartisan Infrastructure Law at the new Boston Logan Terminal in Boston, Massachusetts, on Sept. 12. (AFP-Yonhap)

US President Joe Biden’s executive order on bolstering the country's biotechnology and biomanufacturing sectors with over $2 billion in spending will not dampen the outlook for the South Korean bio industry, according to industry insiders and analysts. The US-first initiative could rather serve as an opportunity for Korean companies, they said.

“The US’ move appears to be another attempt to solidify the ‘made-in-America’ efforts, similar to the electric vehicle and semiconductor sectors. But in the case of biomanufacturing, multinational big pharmas prefer having (contract development and manufacturing organizations) in different countries for better distribution purposes,” said an official at a CDMO company.

The official, who requested anonymity, said that it would be difficult for leading drugmakers to only rely on biomanufacturing capacities in the US as big pharmas seek to secure a stable supply of drug substances and drugs.

Another industry official working at a biotechnology company told The Korea Herald that this could be a chance for Korean companies to set up plants in the US.

For instance, Samsung Biologics -- the world’s largest CDMO by production capacity -- could speed up its long-considered plan to build an overseas manufacturing factory in the US, should the Biden order provide tax incentives or financial support for the company, the official said.

Celltrion on Thursday announced in a notice to shareholders that the Biden order will have a limited impact on the company. It explained that Celltrion’s business proportion of the CMO sector is very little as the firm is focused on selling self-developed antibody treatments.

“Although Celltrion group has many sites that can produce various drug substances and drug products across the world including the domestic production facilities, we will closely review the incentive policies for investment in the US in the future. If deemed advantageous, we will actively consider securing production facilities in the US,” it said in the notice.

A local securities analyst said the amount of spending announced by the White House indicates the likelihood of a negligible impact on the Korean bio industry as a whole.

“The part that is regarded to have a big impact on the drug products industry is the $1 billion -- equivalent to 1.4 trillion won -- support to build bio infrastructure over the next five years. But considering that the construction cost of Samsung Biologics plant 4 is about 1.7 trillion won, (the Biden order) is not at the size that can affect the overall (Korean bio) industry,” said Park Jae-kyung, an analyst at Hana Securities.

The analyst explained that global pharmaceutical companies outsource manufacturing of their products to global CDMOs to stabilize supply, adding that it is not easy to carry out a sudden reshoring as the pharmaceutical industry requires a period of regulatory authorization in order to change manufacturing sites.

The Korea Biotechnology Industry Organization, representing over 500 biotech members nationwide, on Thursday called on the government to come up with plans to strengthen the competitiveness of the country’s bio industry in response to the US' protectionist initiative.

“As the ‘bioeconomy,’ which was mentioned in the US executive order, means not only biopharmaceuticals but also biofuel and bioenergy industries, it expressed the US will to strengthen its competitiveness in biotechnology and biomanufacturing,” said KoreaBIO in a statement.

For the reason behind Washington’s US-first announcement, KoreaBIO pointed to Beijing’s five-year bioeconomy plan that was declared by the Chinese National Development and Reform Commission in May.

“Once the US and China expand investment in the overall biotechnology sector, this will result in accelerating the investment expansion of others such as Europe and Japan and it will lead to fiercer competition between countries,” it said.

“We urge our government to draft mid- to long-term plans to protect the (Korean) bio industry and respond to the expansion of investment and innovation.”