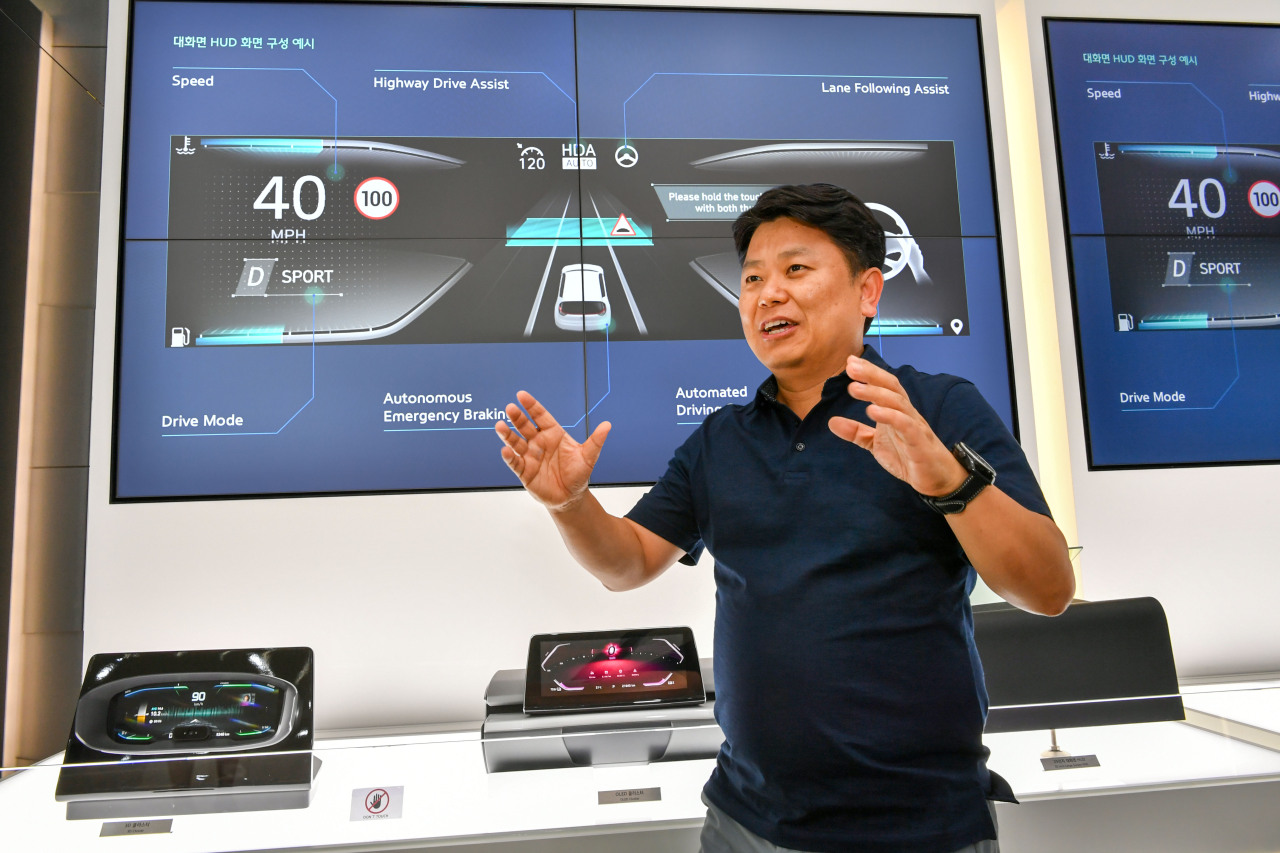 Head-up Display, or HUD, has been largely adopted by global carmakers in recent years as a way of keeping drivers’ eyes on the road. But by using bulky, conventional optics, HUDs could only project limited information on the windshield above the steering wheel, providing rudimentary information such as direction and speed.

However, in the near future, the cockpit feature would be transformed to take a bigger role in driving by applying augmented reality technology, said an executive at Hyundai Mobis, an auto parts company under Hyundai Motor Group.

If an AR-HUD can provide clear 3D images of vehicle status, traffic environment, and even other infotainment features, it may replace not only the role of a dashboard but also a navigation screen on the front which would bring a significant change to the in-vehicle space of today.

“The next-generation AR HUD technology will not only replace navigation and instrument cluster functions, but also develop connected car solutions such as an infotainment system as its new growth engine,” said Han Young-hoon, vice president at Hyundai Mobis‘ information display division, in an interview with The Korea Herald.

The AR-HUD could be developed as a part of connected car solution, as it allows sensors to read road conditions and send the real-time data back to drivers.

In this way, drivers, for example, can instantly see which turn to take at a complex intersection. A note can also pop-up on the windshield as a driver passes by certain location, such as Starbucks, when it is added as a favorite location.

The core advantage of AR-HUD is safety, as it gives credibility to both drivers and passengers, he said.

“Even the slightest glance away from the road ahead can possibly lead to an accident. By overlaying information on top of the physical road in the driver’s field of vision, AR-HUD will keep your eyes on the road.”

An average HUD works by embedding a projector in the dashboard which projects a transparent image onto it with the windshield serving as a giant screen.

If applied with AR technology, the HUD needs to pass through multiple layers of light and reflection, which would make it difficult to produce high-quality 3D images, not to mention the size of AR HUD, which would be much bigger than what it is today. Such shortcomings have been restricted to be applied in a few car models. If the size is too big, it may cause a problem for heat dissipation in the hood area.

“As most AR HUDs face technical hurdles in sizes, making it harder to design the optical path, it is pivotal to develop lighter and thinner device with improved optical path design,” said Han. 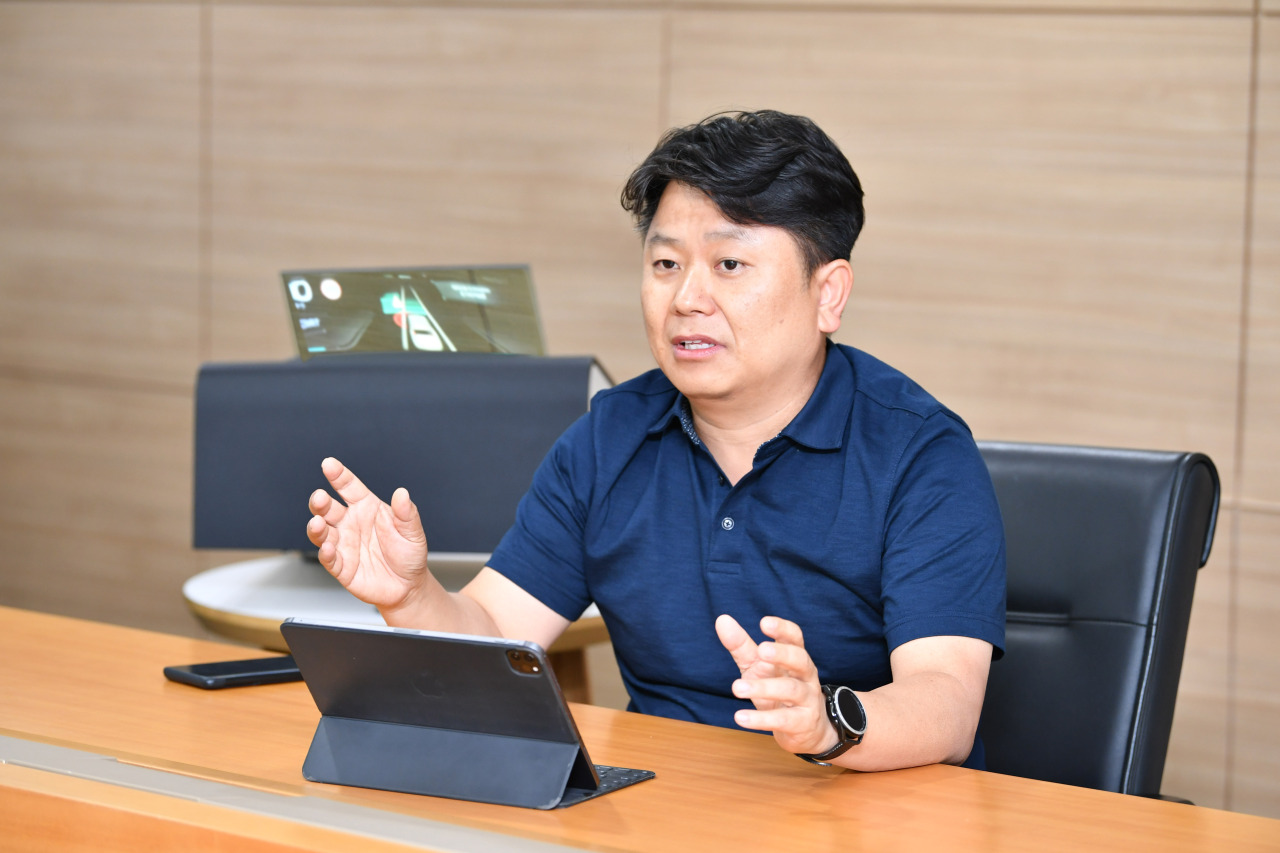 Currently, only few in the market have tested AR-HUD, including Huawei’s device that boasts a unique optical path design and algorithm technologies to eliminate AR images’ blurriness. UniMax, an automotive electronics maker owned by Asus Group, has developed AR-HUD that is at least 30 percent smaller than other models so it can also fit into smaller cars.

Accelerating its focus on creating the most immersive and connected driving experience, Hyundai Mobis, a relatively latecomer to the HUD market, has partnered with UK-based AR-HUD developer Envisics through a $25 million investment in 2020.

Hyundai Mobis’ development into the HUD business began in 2015. It was the first Korean firm to produce HUD products locally. Hyundai Mobis’ first HUD has been equipped in the Genesis GV80, which was launched in 2020.

“We are still improving our mass production technology, but we are on the right track, knowing that we need to focus on AR-HUD,” said Han.

“High-quality mirrors help drivers clearly view critical safety information, which is projected 7.5 meters onto the road in front of driver,” Han said, adding that advancement of the related technology will be pivotal in developing an enhanced AR-HUD.

According to industry tracker IHS Markit, the HUD market is projected to grow at an annual average of more than 12 percent by 2025. In particular, the number of vehicles that are expected to adopt the AR HUD system is forecast to grow from 1 million in 2025 to 12 million in 2030.