Metaverse offices are the future of work: Zigbang execs 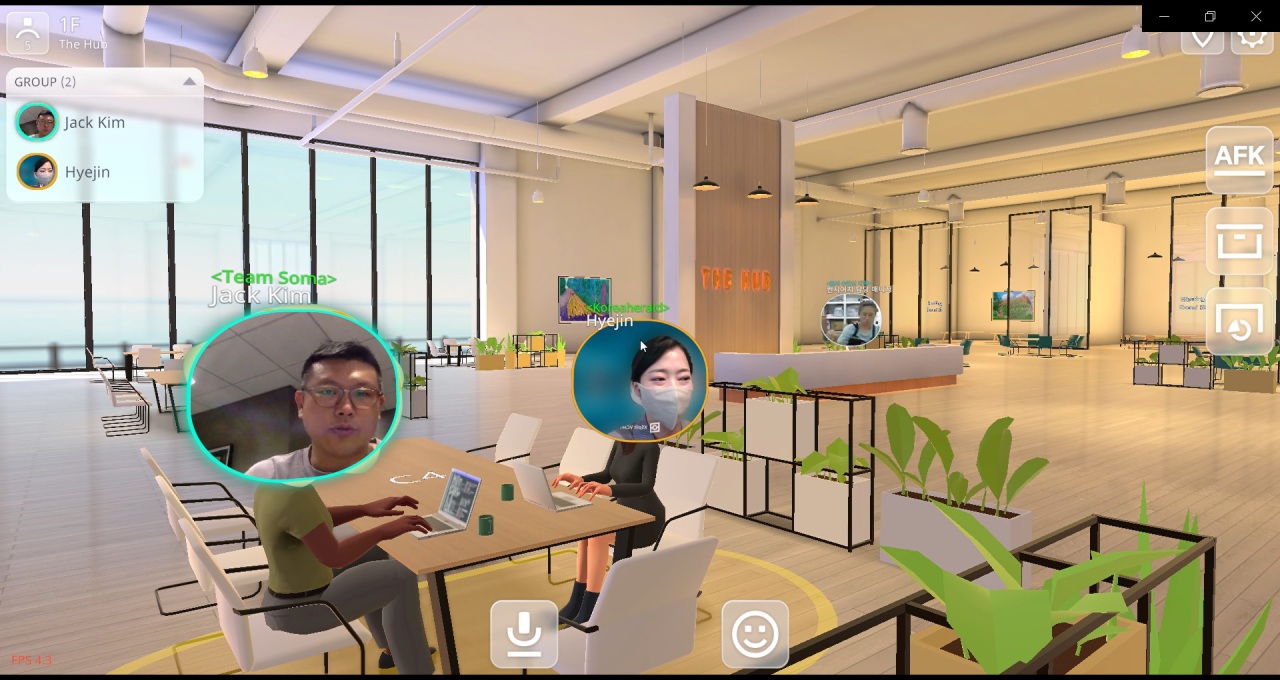 Local property technology firm Zigbang made a bold decision last year to relocate its Seoul headquarters -- not to New York or Tokyo, but to a virtual world.

Instead of a hellish commute in the mornings and evenings, its 400 workers log in to a new interface the company has created. Workers’ avatars hop on elevators to get to their office in the metaverse to chat and have meetings with their colleagues. Meanwhile, their physical bodies stay wherever they choose to be -- at home, coffee shops or satellite offices.

Zigbang is the creator of Metapolis, a metaverse office platform where employees can move their avatars within virtual office buildings and chat with colleagues. The platform, which started off as an in-house remote work office tool, has attracted over 20 local companies including food company Ourhome. The firm is testing the possibility of the metaverse becoming the future of work, beyond a simple support tool for working remotely. So far, it has been successful, according to Zigbang Vice President Lyuh Sun-woong.

“Unlike international and local tech giants, who are themselves doubtful of adopting a metaverse office -- a digital twin of a physical office -- as workplace, we have made a successful transition into virtual space. Changing the paradigm of the workplace, we plan to make forays into the global market as well,” said Lyuh in an interview with The Korea Herald at its metaverse office.

“At first when coworking offices emerged, nobody thought it would be a big success. But now, many companies do their business there or use them as satellite offices. We think metaverse offices will take an even shorter time to become the new normal,” Lyuh said.

Like most companies, Zigbang started to use remote working tools such as Google Meet and Zoom due to the pandemic. But they were inconvenient because the minute we log out, we feel disconnected and even isolated, according to Lyuh.

“So we developed our own metaverse office platform where employees can engage in more interactive communication while working wherever they want -- even overseas,“ he said.

In May, Zigbang launched Soma, an upgraded version of Metapolis, expanding its customer base to overseas. Named after the South of Market neighborhood in San Francisco, Soma aims to become a metaverse business complex for innovative global companies.

Kim Jae-un, Soma team leader at Zigbang, said such incumbent firms have been seeking to connect with their millennial and Generation Z employees -- those born from the 1980s to 2010s -- by holding events in the virtual world.

Compared to Metapolis, Soma provides more avatar options in terms of skin color, and plans to diversify other features including body type, wardrobe options and even sexual orientation.

“We do not want to make stereotypical avatars, but rather give shape to the diverse values and cultural backgrounds of global users,” Kim said.

Currently, Soma has a thirty-floor office building called Proptech Tower, a lounge called The Hub and 42 Convention Center, an auditorium with six venues at 500 seats each where companies can hold events. Within the Proptech Tower, each company can occupy an office space that best suits its business requirements.

Soma has yet to make a profit because it is providing its service to other companies for free, while it receives feedback and fixes bugs to enhance the platform. But after the trial period, Zigbang plans to charge a subscription fee, increasing its profitability overseas.

Zigbang has recently raised 100 billion won ($77 million) in funding from the Korea Development Bank, IMM Investment and Hana Securities. Its corporate value is estimated at 2.5 trillion won. It is the first time in three years that the company has attracted large-scale funding.

The company’s sales revenue surged by 22 percent to 55.9 billion won, while it posted an 8.2 billion net loss due to the cost of recruiting talent.

Founded in 2010, Zigbang started off as a real estate brokerage platform for landlords and tenants. Based on 3D, virtual reality and artificial intelligence, it offers digital twin images of apartments. In January, the company bought out Samsung SDS’ smart devices business division, aiming to enter the smart home market.