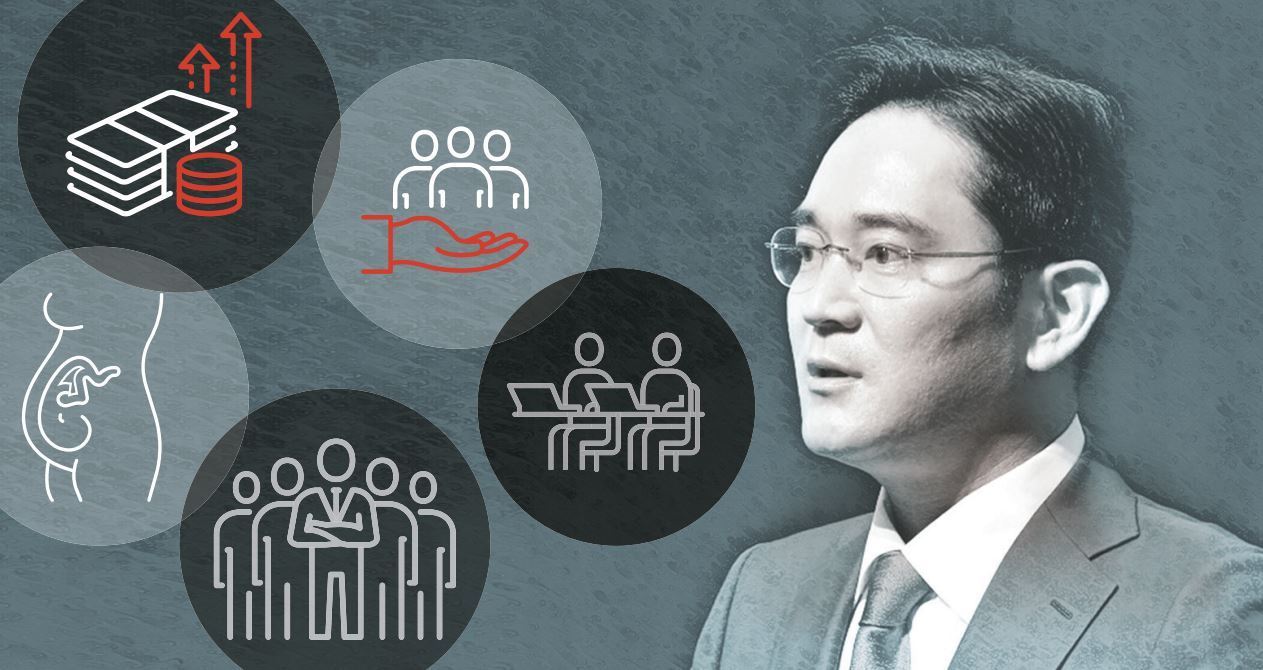 Samsung Electronics Vice Chairman Lee Jae-yong told reporters last month that a flexible work environment is crucial for the IT giant to navigate uncertainties at home and overseas. (Illustration by Park Ji-young/ Photo by Yonhap)

A 6:30 a.m. commute bus, three nutritious meals a day at the cafeteria and a pride that runs deep for being a part of South Korea‘s largest and richest conglomerate have been among many features that captured the “Samsung man” -- trained to fit into the gigantic and somewhat militant organization.

A shared goal of maintaining Samsung’s superiority has united its 270,000-member workforce so far, not to mention its hefty year-end incentives and other financial benefits from record-breaking profits each year. Its strong and loyal workforce, which had been managed under a hierarchical corporate culture, has been without a question the force behind its success. But with the rise of a new generation, changing social values which antagonize personal sacrifice and a growing market demand to cultivate its software power, the IT-to-construction juggernaut appears to be seeking to shake off its office culture.

A flexible and diverse work environment has emerged as one of the top priorities for South Korea’s largest conglomerate to weather uncertainties in the global industry landscape. While slow, Samsung has taken actions in tandem to improve its office culture so that it can maintain its allure for the nation’s best available talent.

Starting July, high-ranking employees at Samsung’s Digital eXperience division, which is dedicated to consumer electronics and mobile phones, as well as the group’s management department, will be encouraged to ditch their suits and ties on Fridays. The looser dress code policy had been permitted solely for rank-and-file employees since 2016.

Also, starting from the second half, tech giant Samsung Electronics is encouraging female workers to return to work and maintain their careers after taking pregnancy leave. In Korea, the fertility rate is in free fall due to the hefty cost of child rearing and women’s fears of taking a career break.

Under the new policy called the “Re-Boarding Program,” those who go on maternity leave after at least five years in a certain field of expertise will be able to return to work for Samsung, which will offer them training, mentorship and remote work opportunities. Samsung Electronics runs 13 daycare centers for over 3,300 children in Korea.

Samsung also looks to introduce the “Work from Anywhere” policy, designed to let employees foster creativity in a flexible environment through shared office spaces in Samsung office locations and some select locations outside the office.

Samsung Electronics’ semiconductor division in June also introduced a full-fledged flexible working hour policy so that the minimum required office hours of workers there -- four hours a day -- were scrapped. It became the latest division to implement this policy, which had already been in effect in the consumer electronics and mobile divisions.

Such experiments come directly from Samsung‘s leadership, which appears to be urgently building a more creative and flexible organization.

Returning from a weeklong trip to Europe last month, Lee Jae-yong, vice chairman of Samsung Electronics and de facto leader of the conglomerate, said what he could do is bring “good people” to the organization and “foster a more flexible work environment” to transform Samsung into an organization that can better prepare for uncertainties.

These moves come as Samsung faces increasingly heated competition in the job market to attract and retain the best and the brightest in the country, amid signs that the so-called Samsung man might be losing the cachet it had in its heyday.

Samsung once invoked the “can-do spirit” that often pushed employees to the limit. This allowed its employees to take pride in a sophisticated set of career skills that rivals could not replicate and to carry on what is touted as a “supergap” strategy.

Experts note that this strictly-ordered structure might be far from sustainable.

If this workplace culture is maintained in contrast with that of domestic rivals, who tend to offer higher employee compensation, better promotion opportunities or openness to flexible working, Samsung will be less likely to shine in the job market, they say.

“A rigid work environment could stifle creativity, such as one where a subordinate cannot disobey orders and a top-down decision-making process is normal, and one where employees work day and night, on weekends and longer than the workweek,” said Kim Dong-one, a professor at Korea University’s business school.

Samsung Electronics has been pushed off its top spot by contenders in the IT industry like Naver and Kakao, food-to-entertainment giant CJ or steelmaker Posco as the most desired workplace for job-seekers since 2014, according to annual surveys by Korean online recruiting platforms Incruit and AlbaCall.

Incruit’s annual survey of over 1,000 respondents over two decades has shown that job-seekers have gradually grown to seek companies with the potential to grow and innovate, and those who allow for personal development and work-life balance over high salaries and compensation systems like those offered by Samsung Electronics.

“In particular, if a tech company is plagued by a rigid workplace environment, and refuses to adapt, it might be seeing the end of innovation,” Kim added.

“Let‘s say it takes 200 million won ($154,000) a year to hire a software developer. It’s unlikely that Samsung Electronics will embrace those expensive developers, as seniority tends to be placed above performance in its hierarchical work culture,” said Choi Jae-boong, a mechanical engineering professor at Sungkyunkwan University, adding that the semiconductor division might be an exception.

A lack of equity in sharing the company’s earnings has largely triggered cutthroat competitions between colleagues and disincentivized employees, according to Samsung labor unions.

Construction service provider Samsung Engineering’s labor union was the latest to threaten a strike. This follows strike threats by other Samsung labor unions, at Samsung Electronics earlier this year and at Samsung Display in 2021. The group began to recognize unionization in 2020, but has yet to experience any employee walkouts.

The current row between Samsung Engineering and its union indicates how the conglomerate’s top-down decision-making culture has had a ripple effect on the company for about a decade, turning Samsung Group‘s cash cow into a black sheep.

Following an aggressive push with cutthroat biddings in nonchemical engineering projects since 2010 under a new leadership, some construction projects proved unprofitable in the Middle East. This triggered earnings shocks with over 1 trillion won in annual operating losses multiple times since 2013, the first operating loss in nearly 10 years.

Ten years on, the 500-member-strong Samsung Engineering union, which represents some 10 percent of all employees, is now calling on the company to normalize wage levels in line with domestic competitors, as it has since recouped the massive losses.

Samsung Engineering is one of the Samsung affiliates that is already experiencing a brain drain coupled with slower hiring -- despite its highly paid staff and executives.

Since 2019, Samsung Engineering, Samsung C&T and Samsung SDS have seen their employee numbers gradually decline, despite a gradual rise in the annual average salary of staff and executives to over 100 million won as of 2021, according to the listed companies’ year-end financial statements compiled by the state-run think tank the Korea Economic Research Institute.

This phenomenon puts Korean conglomerates like Samsung to the test: a double whammy of rising payroll due to inflationary pressure and a shortage of talent.

“Korean companies might be feeling pressure from Korea’s fast-paced pay hikes amid a talent war,” said Kim Yong-choon, a researcher at the KERI.

“As wages are sticky and resistant to change from economic downturns, companies might be forced to implement restructuring instead of retaining employees when they face headwinds,” Kim added.