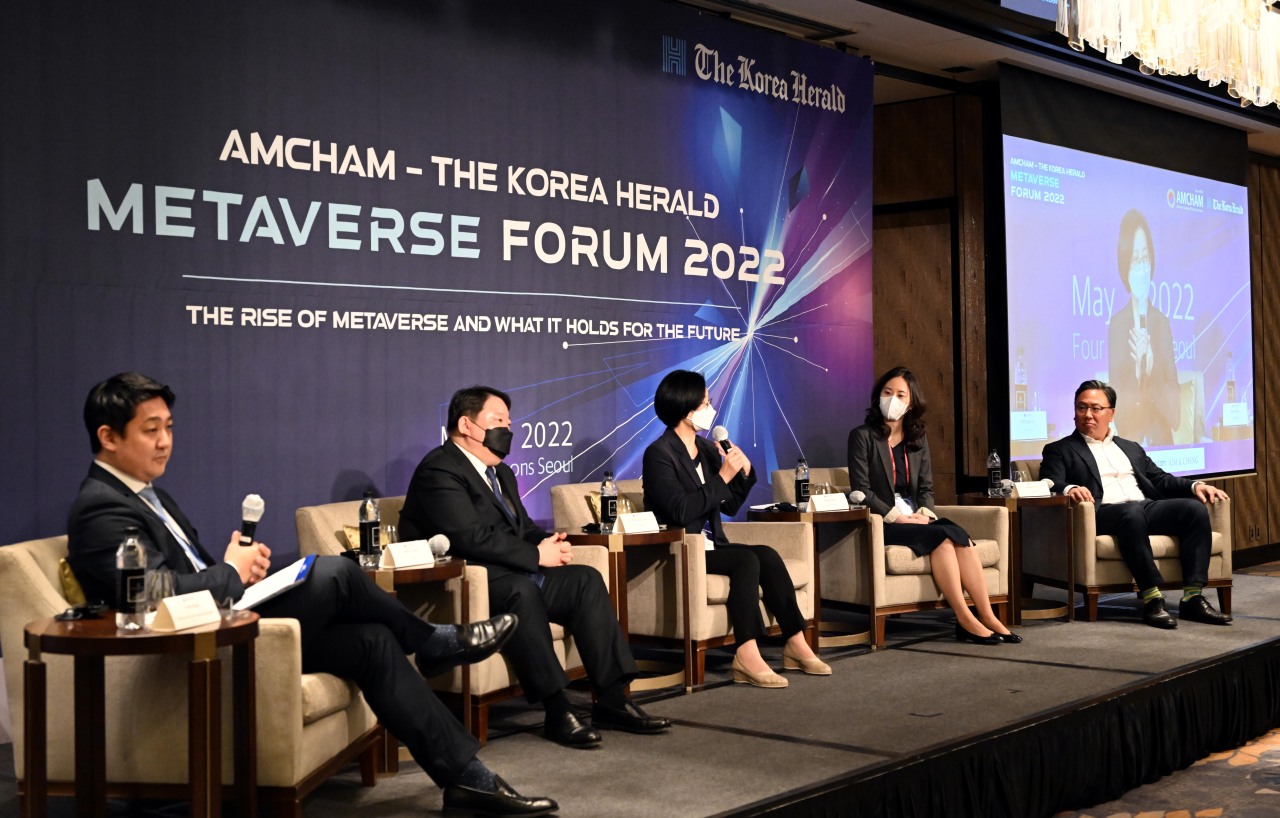 Experts and entrepreneurs got together in Seoul Monday to discuss the ways industries in South Korea and the US are enthusiastically embracing emerging technologies required for the metaverse, and the legal framework that is adapting to the new ecosystem in Korea.

Taglined “The Rise of Metaverse and What It Holds for the Future,” the Metaverse Forum 2022, co-hosted by The Korea Herald, the nation’s largest English-language newspaper, and the American Chamber of Commerce in Korea, showed that metaverse technologies are boosting connection between people regardless of whatever physical barriers there may be.

Rather, the need to overcome such barriers became abundantly clear in the wake of the pandemic.

“Now in the post-COVID era, we are seeing new business models emerge,” James Kim, chairman and chief executive officer of AmCham Korea, told the audience at the event held at Four Seasons Hotel Seoul. Kim represents some 800 member companies based out of Korea.

“With the advancement of technology, the concept of the metaverse no longer remains an elusive dream.”

As more companies adopt cloud services and virtual meetings, the world is seeing more room where the metaverse could play a role in transforming how people work, study, play, chat with friends, attend events and even buy items.

“Many prominent corporations profess metaverse as a future growth engine, but most are at too early a developmental phase to be introduced publicly,” The Korea Herald Chief Executive Officer Choi Jin-young said in an opening remark.

“More research and experimentation is needed concerning the metaverse’s true nature and potential. However, there is no doubt that it will become the main trend in industry.” 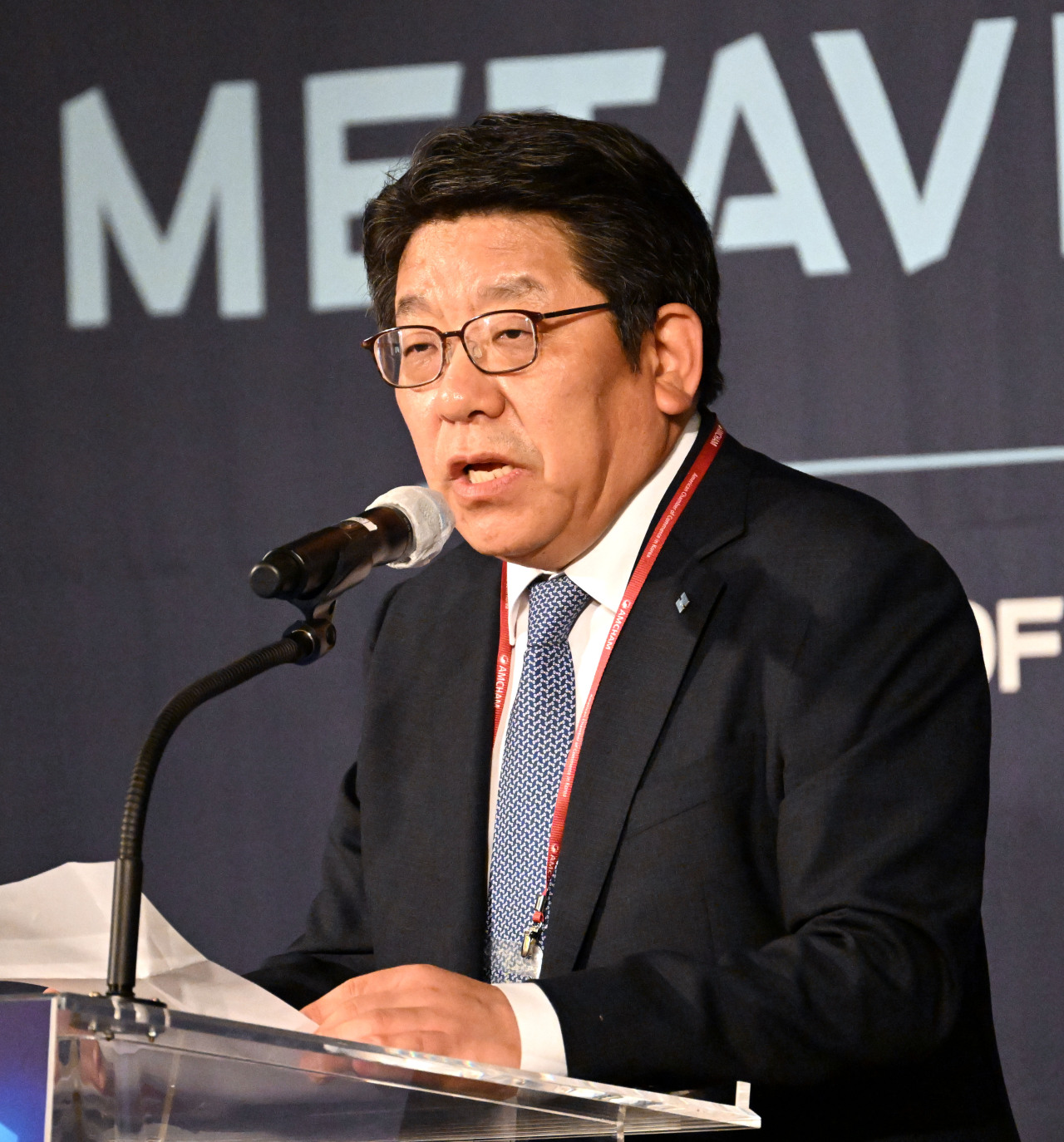 Speakers at the Metaverse Forum 2022 stressed that the interoperability of devices on a single metaverse platform, as well as the ubiquity of a self in many different dimensions of the world is a main goal that all metaverse-related companies have to pursue.

In that regard, collaboration of different companies on a metaverse value chain is important, given that no single company is able to create a complete metaverse alone.

“(VR, AR and XR) are the roads that we are taking on this journey to the metaverse,” said Steve Park, director of public policy for Meta Korea and Japan, in his presentation at Metaverse Forum 2022.

Defining the metaverse as the successor of the mobile internet, the Meta official underlined that users must feel like they are present with other people in the virtual world.

“If you are stuck on one platform or service, that‘s not going to be the metaverse,” he said, referring to the importance of interoperability in the metaverse.

SK Telecom, a telecommunication company that operates its own metaverse platform ifland for 80 countries, also plans to launch a PC version of ifland in the second half of this year, as well as Oculus Quest version in the year-end.

“We expect it will take another five years to offer a fully immersive environment for users when it comes to metaverse experience. We hope to see more contents providers collaborating with service platforms,” said Lee Mi-yeon, Metaverse CO partnership team leader at SK Telecom.

Also, the rise of “Web 3.0,” a new decentralized internet backed by blockchain technology that is responsible for cryptocurrencies, nonfungible tokens and metaverse, is highlighting the need of the hyper-connective ecosystem.

“The shift to Web 3.0 will create basis for the new digital economy based on cryptocurrency and NFTs --and digital lives represented by metaverse,” said Patrick Yoon, managing director of Korea at Crypto.com. 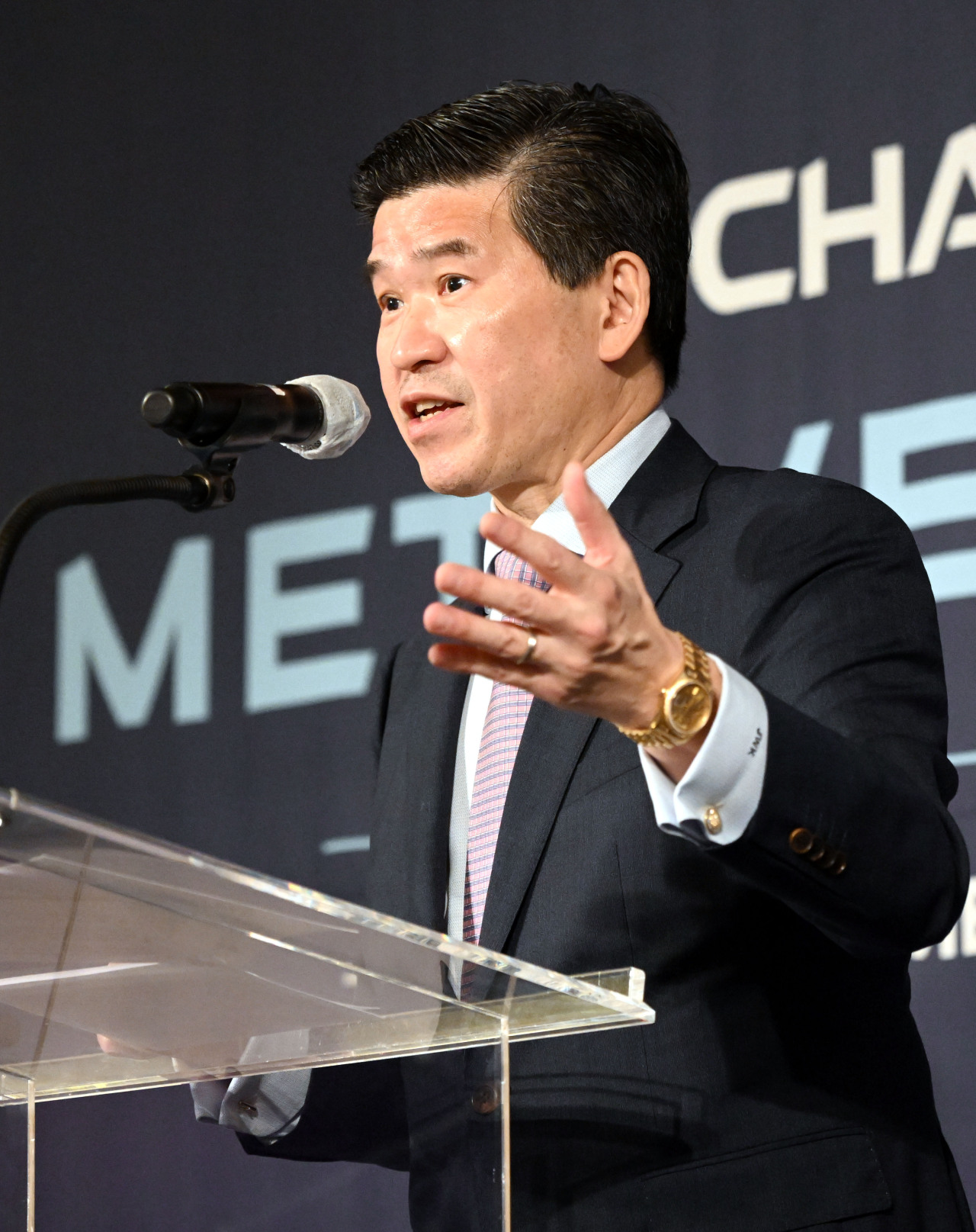 Embodying your hidden self

The metaverse could be a means of expressing the many side of self, a panel discussion showed at the event.

Meta’s Steve Park said people already have multiple personas and the metaverse is a platform to express these multi-persona. Regarding side-effects, such as online crimes using anonymity, Park said platform providers and related authorities should be able to regulate that.

“I don’t define a person’s identity as one, as individuals have different positions at home or at their office. Many say one’s identity is something that does not change,” Lee said.

“But is it really? People find it to be more free on the metaverse as relationships do not get defined there. People can create more than one identity, and a recent buzzword ‘secondary character’ has gone viral as well.”

But there could be possible side effects of allowing a single person to have multiple avatars and hiding his or her real identity.

This leads to a discussion over the current lack of regulations in place to avoid any crimes that could take place in the metaverse. Lee of SK Telecom said she anticipates discussions among lawmakers to build a new legal framework, but there are still constraints to what they can do until actual issues in the metaverse come up.

She added another legal difficulty that the metaverse brings up would be the definition of a citizen, which becomes obscure in the digital world. 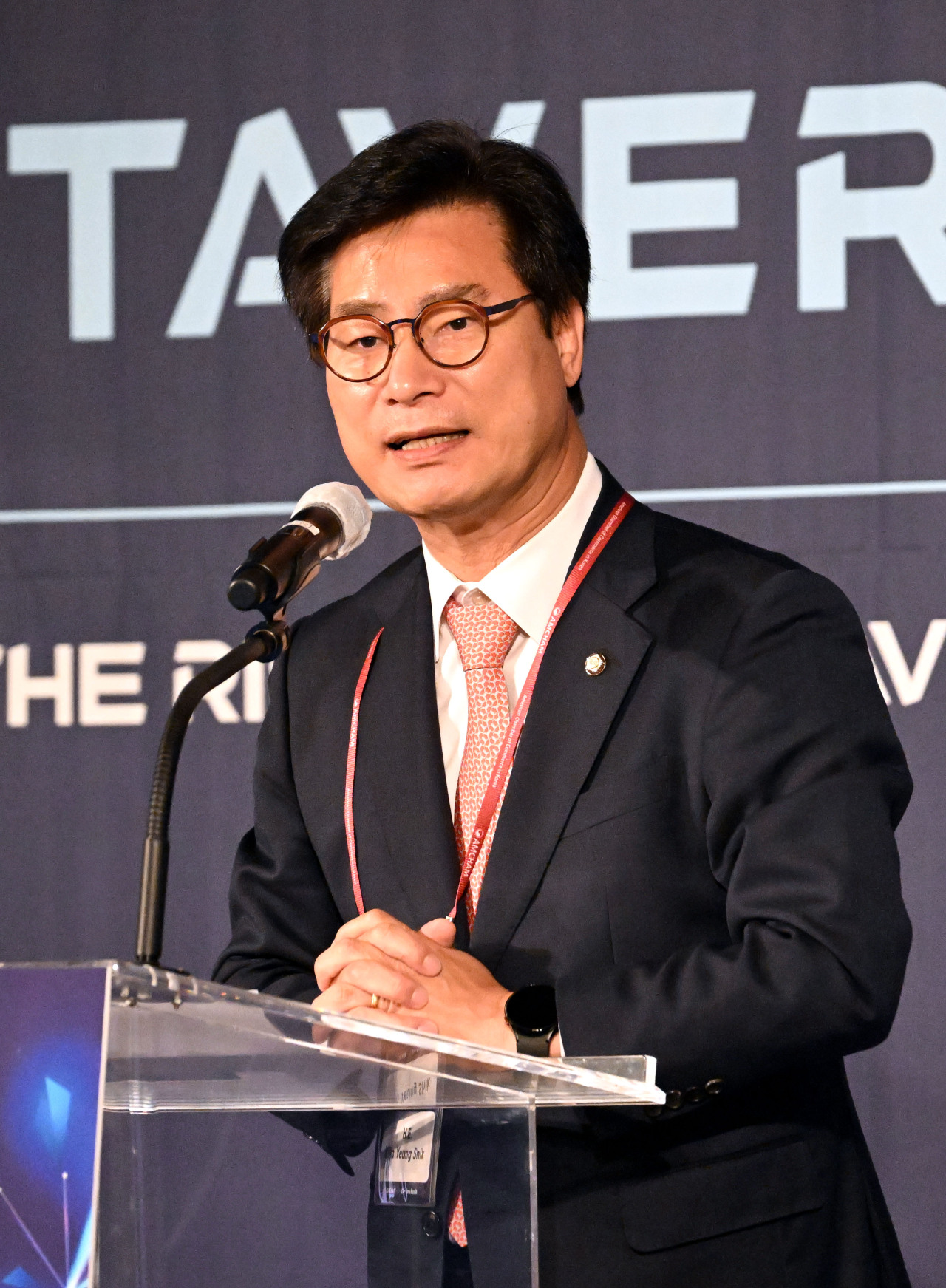 The regulatory uncertainties also affect the way virtual assets are being traded in the virtual world.

Mooni Kim, foreign attorney at Kim & Chang, raised the need for a renovation in the regulatory landscape for the metaverse, virtual assets and NFTs that are tradable on the virtual world.

“No law that actually exists can specifically govern what the metaverse is, whether in Korea or anywhere else in the world,” Kim said. “Relying on existing laws shows limitations as it has no consideration of current new innovations.”

Currently, virtual assets and non-fungible tokens tradable on metaverse are regulated under the Anti-Money Laundering Act which requires a de facto Virtual Asset Service Providers license. The problem is that issuance of the license is very time-consuming for businesses as it tends to take 10 months to one year to get prerequisites to apply for it.

”This could compromise a lot of businesses, especially in this fast-paced business environment,” she said.

But the outlook for regulatory reformation is promising as President-elect Yoon Suk-yeol’s agenda includes drawing up new special law for metaverse and digital assets, and new agency for regulating digital assets and related businesses.

“The transition is real and is imminent,“ Kim said. ”Existing laws are not sufficient to take care of new inventions coming forward and the question is how we are going to deal with them. With the new incoming Yoon administration, I think we are looking at a very exciting juncture in the field of metaverse regulations.” 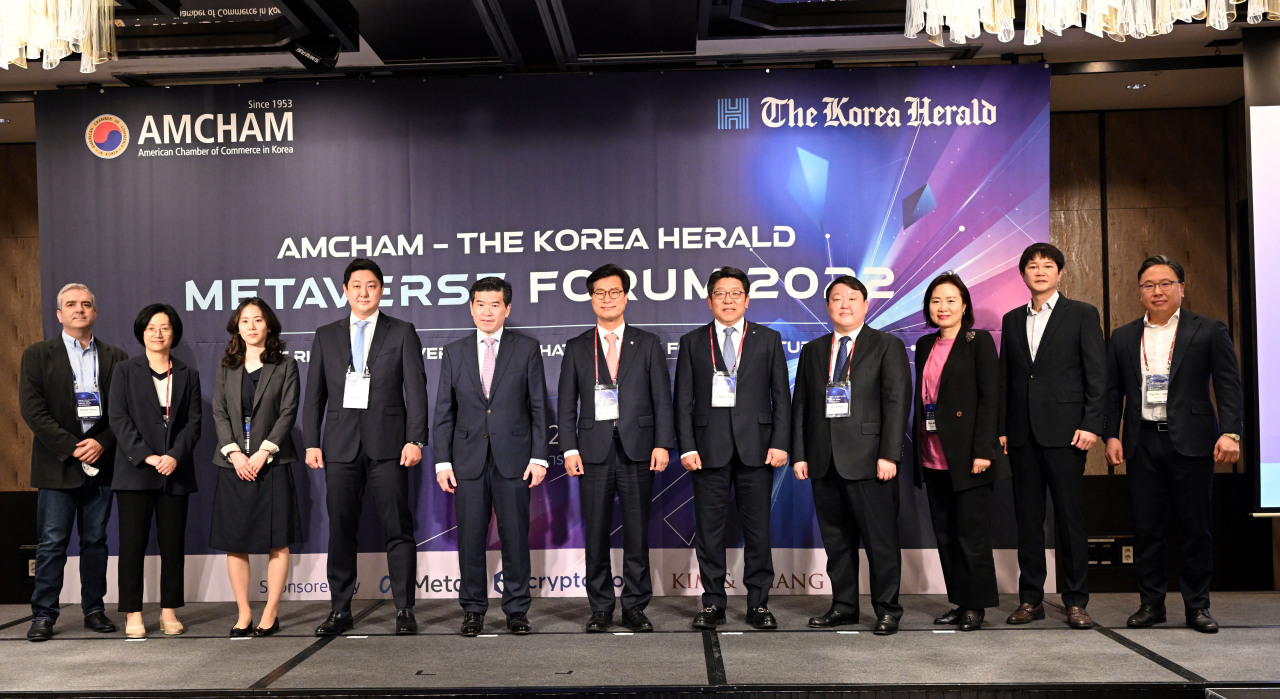