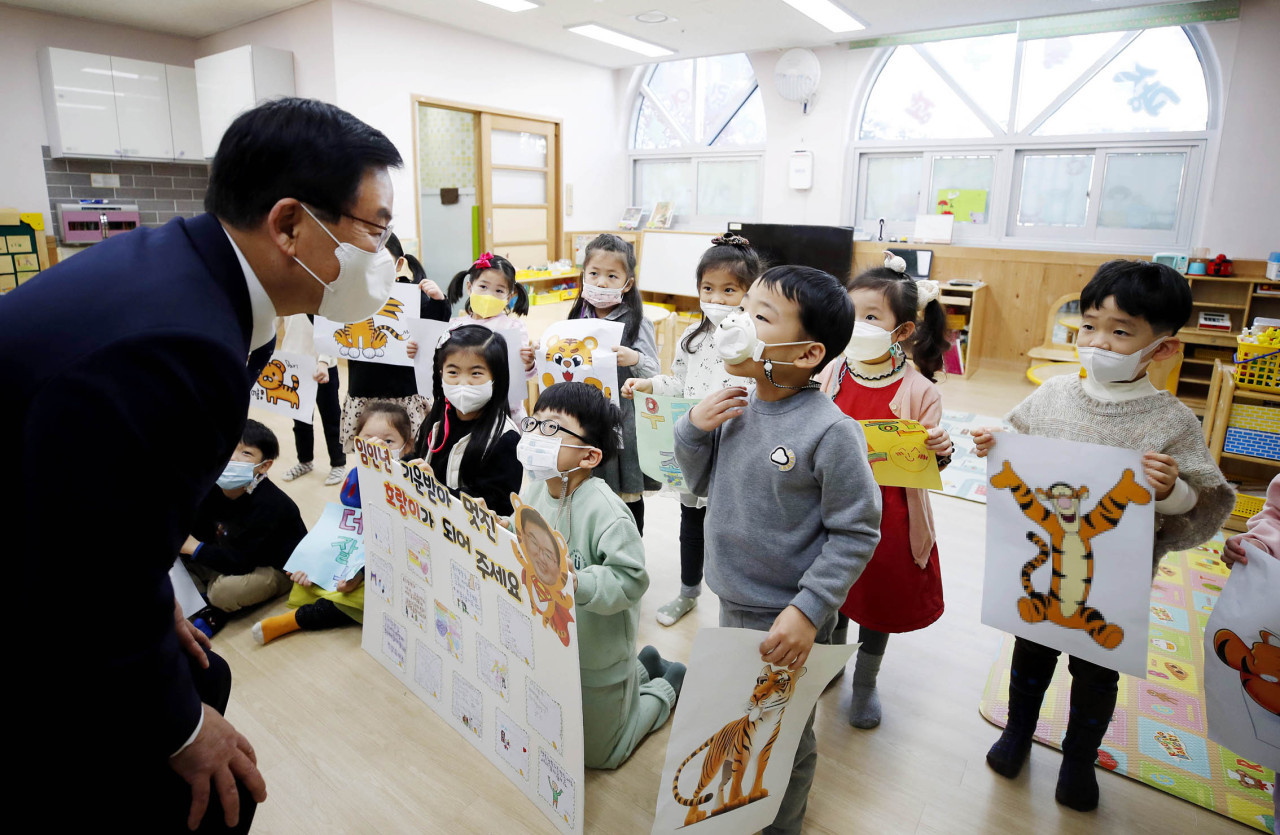 Children talk to Bukgu District Office Mayor Moon In during his visit to a local kindergarten in Gwangju on Jan. 3. (Yonhap)

South Koreans born after 1990 will not be able to claim their state pension if an overhaul of the current pension system is not carried out swiftly, a Seoul-based think tank said Thursday.

With the nation’s state pension age remaining relatively low compared to other major economies and the lackluster amount of money being funneled into the fund, those set to receive the pension from 2055 will likely fail in claiming their contributions, a report by the Korea Economic Research Institute showed.

One of Korea’s largest economic think tanks said that it assessed data from both the Organization for Economic Cooperation and Development and Statistics Korea in compiling the report.

Compared with the Group of Five nations – US, UK, France, Germany and Japan – the age at which people are eligible for state pension currently stands at 62 here, which is at least three years younger than the age range of 65 to 67 of the five economies. And while South Korea plans to raise the age to 65 in 2033, the five nations plan to raise the age range to 67 to 75 in the near future, KERI noted.

The report comes as Korea is set to become a superaged society in the near future, as it also deals with growing elderly poverty. KERI said the poverty rate for those aged 65 and above here came to the highest among the 38 OECD members at 40.4 percent. The US ranked No. 2 at 23 percent, with Japan and the UK trailing at 20 percent and 15 percent, respectively.

South Korea will become a superaged society in 2025, with those aged 65 and above accounting for 20.3 percent then, eventually reaching 37 percent in 2045. The age group accounts for 17.3 percent of the population of over 50 million here at the moment.

KERI voiced concerns that the nation’s lackluster public and private pension programs and a failure to reform the pension system could become a major burden for future generations.

The National Assembly had said earlier that under the current circumstances, the state pension will be depleted by 2055.

“It is necessary to invigorate the private insurance and pension market alongside more tax benefits and an overhaul of the pension system to brace for a superaged society,” said Choo Kwang-ho, the research head of KERI’s economy policy division, in the report.