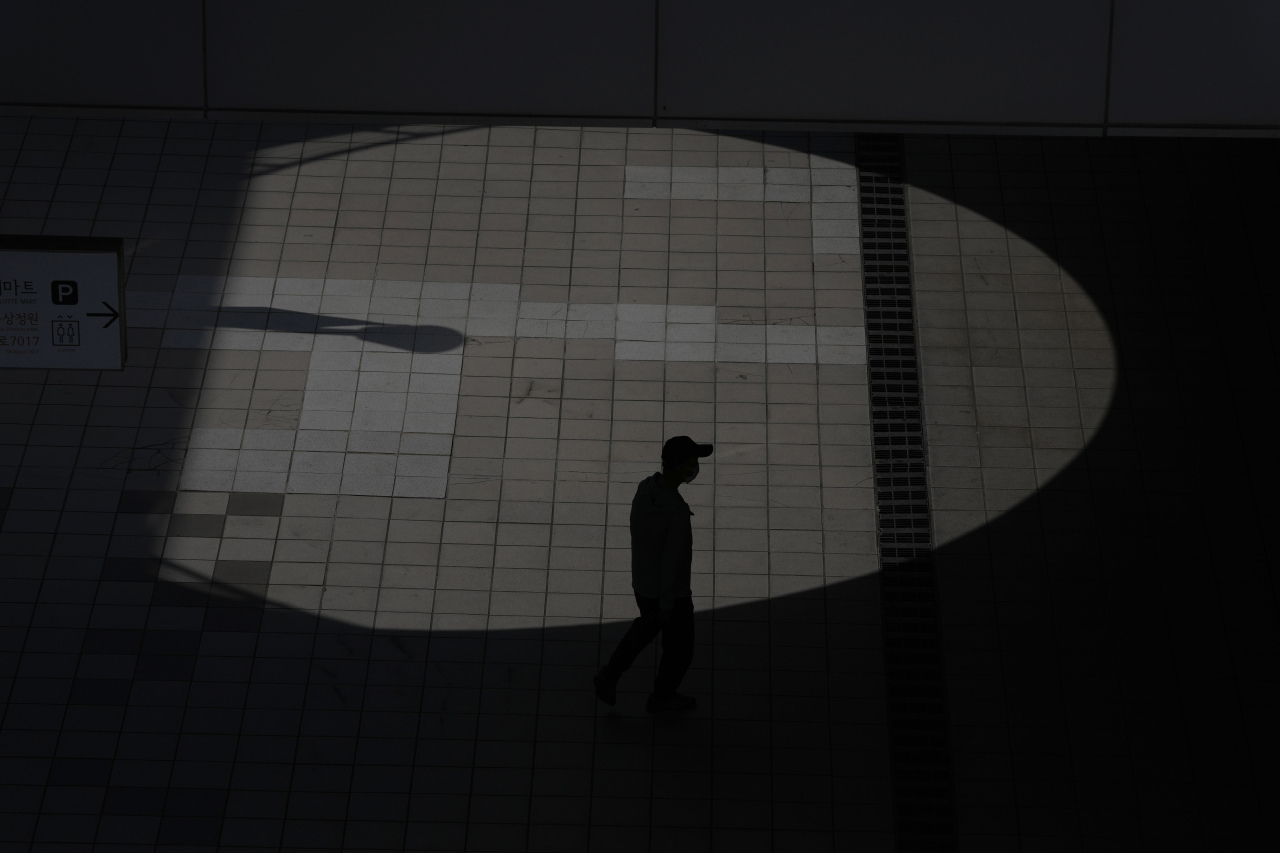 A visitor wearing a face mask to help curb the spread of the coronavirus is silhouetted while walking past outside of a shopping mall in September in Seoul, South Korea. (AP-Yonhap)

South Korean day traders are expressing frustration over the bearish domestic stock market in early October, in the belief that short selling by institutional investors is adding fuel to the market volatility.

As of Oct. 13, a public petition calling for a complete ban on short selling activities in Korea’s stock market had gained nearly 49,000 endorsements within a week, in another major collective action unfolding on presidential office Cheong Wa Dae’s website.

The unnamed petitioner claimed that an “astronomical amount of short trades,” in particular by foreign investors, was putting a lid on the growth potential of listed companies in Korea, with concerns surrounding the companies being exaggerated to downplay their rosy business prospects and earnings surprises.

This comes as short selling transactions stood at 63.6 trillion won ($53.2 billion) from May until Oct. 12 on the Kospi and Kosdaq bourses combined, according to data from stock bourse operator the Korea Exchange. Foreign investors carried out 3 out of 4 short trades by transaction value, the KRX data also showed.

Short selling refers to the practice of borrowing stocks and selling them, with the aim of eventually buying the same number of stocks at a lower price when their value declines, before returning them to the lender.

The short seller makes a profit from buying the stock at a price lower than the price it sold for, largely based on a prediction of a bearish market.

Korea began allowing covered short selling for large-cap stocks on May 3, with some restrictions, following a 14-month temporary ban on such activities to address widening volatility in the market due to the pandemic’s impact. Korea outlaws naked short selling, which is when a trader sells shares before borrowing them.

As of Oct. 13 the Kospi, a benchmark index representing the Korea Exchange’s main bourse, had fallen 6.4 percent since May 3. The Kosdaq, an index for the development bourse, slipped 3 percent.

The bearish trend grew stronger this month. Solely in October, as of Oct. 13 the Kospi had tanked 4 percent. Short trades rose in tandem, as 4.3 trillion won worth of stocks were shorted over the six trading days ending Oct. 12, accounting for nearly 7 percent of the total this year.

Market bellwether Samsung Electronics’ stock price dropped 7 percent in October, with some 30 trillion won worth of its market cap evaporating within six trading days until the share price hit the annual low Oct. 12. The bearish trend continued despite an earnings release declaring that its quarterly revenue had reached an all-time high of 73 trillion won as of September.

Samsung Electronics was one of the most shorted stocks in October among over 2,300 companies listed on Korean bourses. Over 80 billion won worth of short sales were recorded in the six trading days ending Oct. 12.

The short selling trend will apparently linger in Korea. Short interests -- borrowed shares that are not bought back by investors taking short positions -- rose over 90 percent to 12.2 trillion won on the Korean stock market from May until Oct. 7, meaning investors have ramped up short selling activities.

The latest petition addressed to the presidential office follows similar petitions that urged Korea to prohibit all short selling activities, with one having gained over 200,000 supporters in January. Petitioners have also called for restrictions on how long institutional investors can keep their short positions, with the limit for individuals being set at one year, so that the financial authorities can take action to level the playing field.