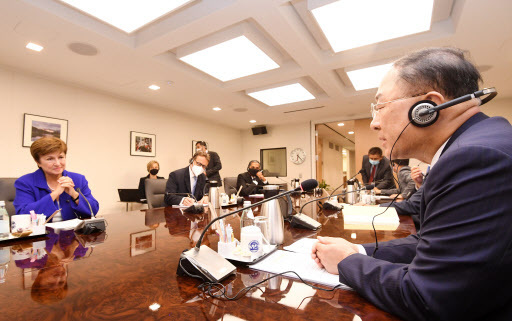 South Korean Finance Minister Hong Nam-ki (right) speaks at a meeting with Kristalina Georgieva (left), managing director of the International Monetary Fund, in Washington on Tuesday on the sidelines of the G-20 finance ministers and central bank governors meeting. (Yonhap)

South Korea’s Economy and Financial Minister Hong Nam-ki has said that the government will keep expansionary policies next year as the country eyes an economy recovery and return to “normal life” out of the COVID-19 pandemic.

“We’re gradually preparing to go back to normalcy by increasing the vaccination rate and the country’s central bank is gradually adjusting its accommodative monetary policy,” Hong, who also doubles Deputy Prime Minister, told Kristalina Georgieva, managing director of the International Monetary Fund, in Washington, DC, on Oct. 12. “But we’re still pursuing expansionary fiscal policy for next year,” he said during a bilateral meeting that took place on the sidelines of the G-20 finance ministers and central bank governors meeting. South Korea proposed a record high budget of 604.4 trillion won ($506.2 billion) for next year.

While keeping its policy rate unchanged at 0.75 percent, Bank of Korea Gov. Lee Ju-yeol hinted a rate hike next month, saying that the country was on a solid recovery track despite recent hikes in the COVID-19 cases.

The meeting came a day after the IMF kept South Korea’s 2021 growth outlook at 4.3 percent, while revising down its projection for the global economy by 0.1 percentage point to 5.9 percent. The Washington-based fund cited “rising vaccination rates” and “robust exports” as key factors that can drive economic growth in Asia’s fourth-largest economy.

Hong also urged the agency to take into account each country’s situation when recommending financial policies.

“Traditional macroeconomic policy has its limitation amid the increase of cross-border capital flows and expansion of new cross-border payment methods such as cryptocurrencies have limitations. Therefore, tailored policy recommendations that fit each country’s situation are conducive,” the minister said.

The World Bank president urged South Korea’s active participation in financing its fund for the world’s poorest countries, or the International Development Association, which is set to be decided in December this year and Hong said the nation will make a decision after taking into consideration various domestic situations.

Hong responded positively to Claver-Carone’s request to participate in capital increase of the IDB during the annual meeting next year and expand South Korea’s current a 0.004 percent stake in IDB.