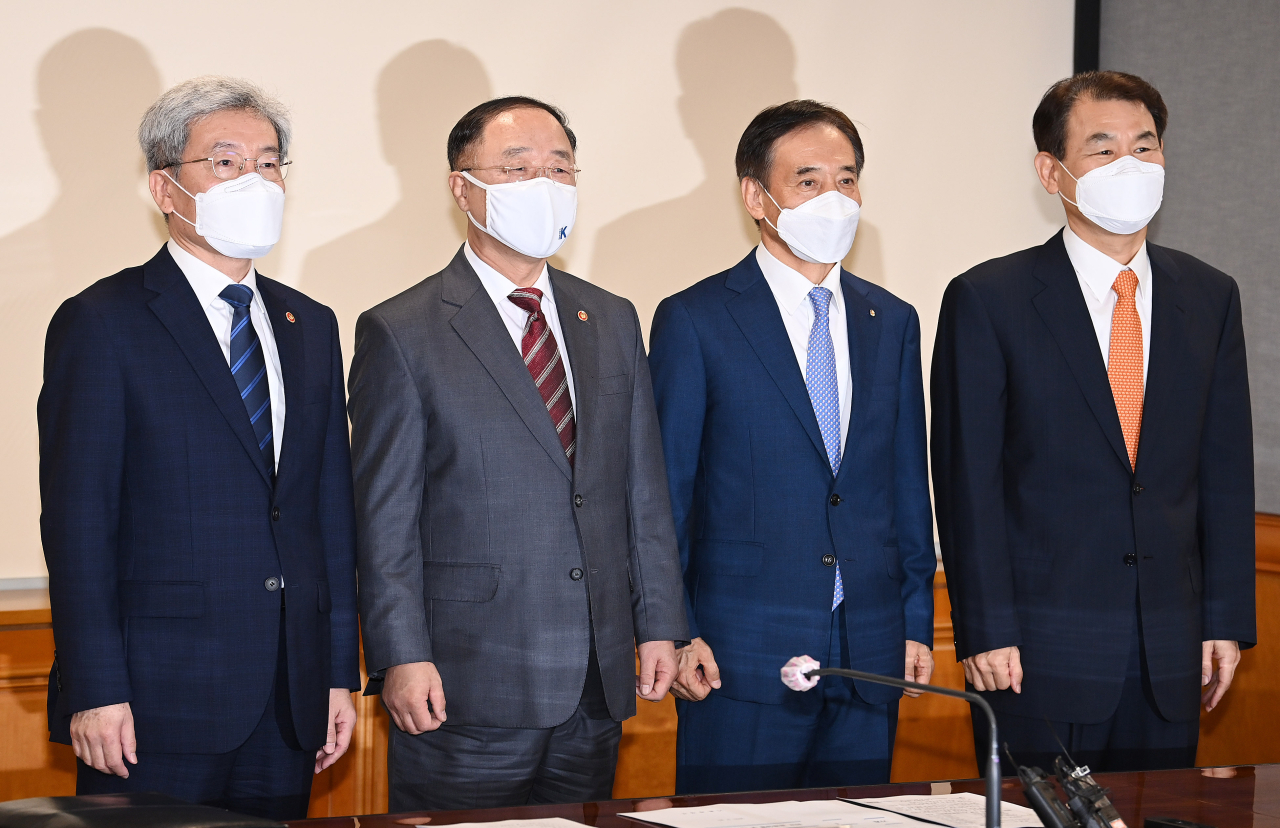 South Korea will put forth its best efforts to curb the nation’s fast-growing household debt and roll out additional measures next month to do so, while allowing borrowers to take out loans within their repayment capabilities, the nation’s fiscal chief said on September 30.

Deputy Prime Minister and Finance Minister Hong Nam-ki made the remark at a meeting of macroeconomic leaders here, where he was joined by Bank of Korea Gov. Lee Ju-yeol, recently appointed chief of the policymaking Financial Services Commission Koh Seung-beom and new head of the watchdog Financial Supervisory Service Jeong Eun-bo. This marks the second such meeting this year.

“Above all, we will search widely and review measures that could contain the growth of household debt and help borrowers who actually need financial support to apply for loans within their repayment capabilities,” Hong said.

“The measures will be announced in October,” he added.

Financial authorities have been rolling out measures to curb the nation’s snowballing household debt, prompted by several catalysts including the BOK’s record-low interest rate which took down commercial lenders’ borrowing rate and heated housing and stock market.

Commercial banks have temporarily halted its extension of key personal loan and mortgage products, while tightening its loan screenings, upon the request of the financial regulators.

Household debt gained 7.9 percent on-year in 2020 and financial authorities seek to cut the figure to below 6 percent by the end of the year and below 5 percent next year.

Despite growing risks tied to the snowballing household debt, Hong painted Asia’s fourth-largest economy’s road to recovery in a rosier picture, with the vaccination drive that has been gaining traction.

Hong said that despite difficulties posed by the fourth wave of virus, Korea’s economy has been displaying stable recovery and it’s likely to remain that way, backed by the solid vaccination rate. So far, 76 percent of people in Korea have received the first dose of COVID-19 vaccine shots and some 50 percent have been fully vaccinated.

In a separate government meeting held earlier in the day, Hong reiterated the government’s plans to adopt the so-called “With Corona” scheme, treating the COVID-19 virus more like seasonal influenza coupled with eased social distancing rules. The latest financial support program worth some 1 trillion for the self-employed and small businesses will kick-off in end-October, he added. The program seeks to hand businesses hit by the COVID-19 since July with cash support.

In August, the BOK raised the benchmark interest rate by a quarter percentage point to 0.75 percent from a record low of 0.5 percent, carrying out its first pandemic era rate hike. This marked the BOK’s first rate hike since May 2020 -- shifting toward more hawkish policies -- and precedes the US Federal Reserve’s expected rate hike, which experts said could come next year.

Hong stressed the importance of monitoring existing global risks that have risen amid monetary easing and recovery from the pandemic. He mentioned risks stemming from the Federal Reserve’s tapering of bond-buying programs, worries of inflation, surge in global oil and raw material prices. Liquidity risks tied to the debt crisis faced by Chinese property giant Evergrande Group were among the risks mentioned by Hong as well.