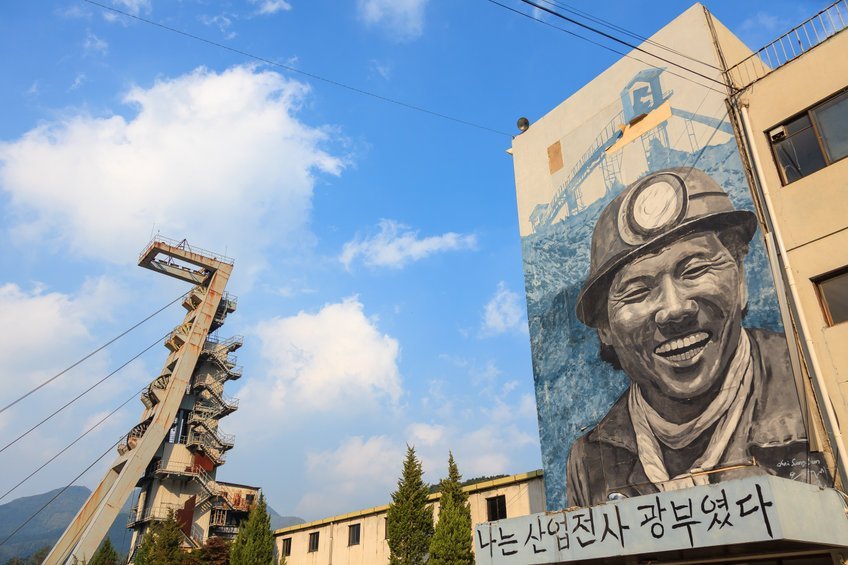 A wall painting of a miner and the blue sky at an abandoned coal mine in South Korea. (123rf)

The Korea Resources Corp., or Kores, merged into the newly established Mine Reclamation Corp., called Mireco, under new rules that took effect Friday.

The birth of Mireco was foretold in 2018, when a task force within the Energy Ministry recommended that the debt-saddled Kores be restructured.

Kores, considered a major culprit behind the botched overseas resources development projects during the former Lee Myung-bak administration in early 2010s, was one of three state-run companies in dire straits, out of 40 state-run institutions in Korea that are entitled to government compensation for their losses. The other two were the Korea Coal Corp., or Kocoal, and the Korea National Oil Corp., or KNOC.

The equity capital of all three institutions -- overseen by the Ministry of Trade, Industry and Energy -- was severely impaired and projected to remain so for the next five years.

According to the Finance Ministry in August, the three companies would see their respective debts outsize their assets until 2025 if they survived at all, which translated into a massive drain on the government’s budget.

If Kores had survived, the company’s projected debts would have amounted to 2.9 trillion won ($2.5 billion) by 2025, while its assets -- debts plus shareholders’ equity -- would have shrunk 70 percent over four years to 1 trillion won.

This means that its shareholders’ equity would have been negative, as its losses increased and the government faced a heavier fiscal burden to recoup those losses.

Similar bleak projections loom ahead for the other two companies.

The Finance Ministry also said the three state-run firms’ combined costs of borrowing would amount to 2.8 trillion won in the next five years.

This fiscal burden accompanies Korea’s pledges to phase out fossil fuels and achieve carbon neutrality by 2050.

This indicates that more restructuring of debt-ridden institutions could be ahead soon, as with Kores.

The newly established Mireco will set its sights on making an exit from Kores’ natural resources development projects.

Its newly established overseas team will focus on the prevention of mining damage and sales of foreign assets, including the Wyong Coal project in southeastern Australia.

In the meantime, a Kores unit dedicated to overseas resources development was incorporated into Mireco’s division specializing in domestic development.

Mireco will announce its launch on September 15.

Kocoal, on the other hand, carried out a downsizing by discharging its 30 percent of manpower and 50 percent of coal production over the course of four years until 2020, after its plan to discontinue was scrapped in 2016 due to protests of local communities near coal mines in Korea.

As for KNOC, a governmental task force urged the Energy Ministry in April to execute reorganization and inject additional financial support to keep the ailing company afloat.