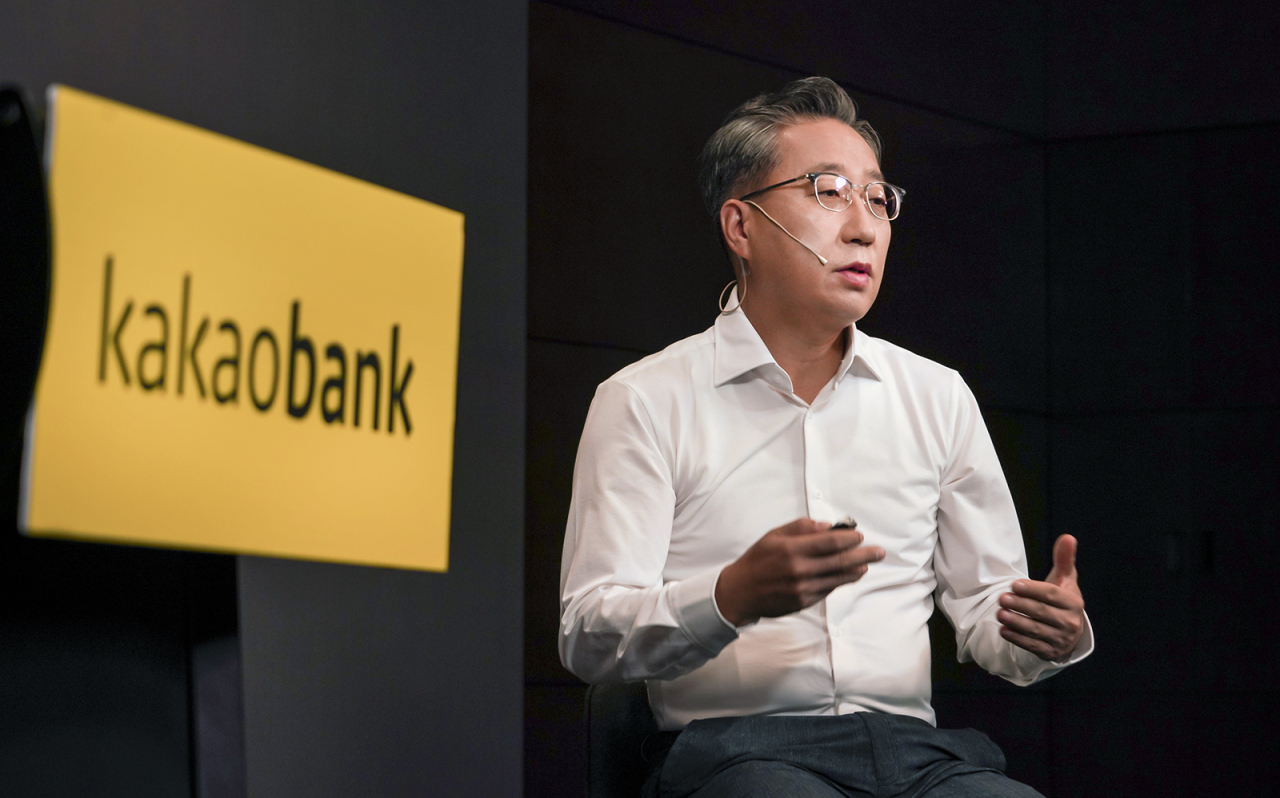 KakaoBank, South Korea’s leading mobile-only bank, said on July 20 it aims to become the nation’s No. 1 retail bank leading innovation in finance through its market debut on the nation’s main board Kospi next month.

“KakaoBank has proved business capacity of a mobile application as it secured 16.15 million users (as of first quarter this year) and turned into the black within 1 1/2 year (after establishing the firm in 2017),” Yun Ho-young, chief executive officer of KakaoBank, told reporters during an online press briefing.

“We have promoted our business growth by creating synergy between banking and platform businesses. It is a unique mechanism that other business operators (in the related fields) had never tried before.”

The combined transaction amount of the mobile-only commercial lender’s users jumped 160 percent on-year to 79.1 trillion won ($68.7 billion) in the January-June period this year. KakaoBank’s service is particularly popular for those in their 20s and 30s, but the portions of teenagers and those over 50 have increased four times and six times, respectively, over the past four years, Yun said.

Fueled by the growing popularity, the net profit of Kakao’s financial subsidiary surged after logging its first profit in 2019. It recorded 46.7 billion won in net profit in the first three months this year, swiftly reaching 40 percent of the previous year’s record of 113.6 billion won, according to the firm’s prospectus.

“I believe that innovation is based on users’ high frequency. From this perspective, KakaoBank is the No. 1 financial platform in the country. ... We will show our further growth based on a massive amount of capital after listing,“ he said, unveiling its market debut on Aug. 6.

KakaoBank hopes to offer new financial service opportunities to users by actively utilizing its innovative technologies, strong platform power and Kakao’s ecosystem. Under the plan, the company looks to expand its services to funds, insurance and wealth management.

It is also set to introduce new products and services that link to nonfinancial industries such as ecommerce and traveling. The mobile-only bank stressed its will to enter global markets via equity investments and establish joint ventures using its IPO proceeds.

KakaoBank aims to raise up to some 2.55 trillion won through the IPO proceeds by offering around 65.45 million new common shares in the price range of 33,000-39,000 won. The exact share price will be determined after the book-building process that is slated to wrap up on July 21. The two-day retail tranche is scheduled to be held on July 26-27, while KB Securities and Credit Suisse Securities are the lead underwriters.

Meanwhile, KakaoBank’s upcoming listing holds major significance for both the market and investors since it marks the first time in 27 years a local financier is going public after the Industrial Bank of Korea’s Kospi debut in 1994.

But at the same time, the mobile-only bank valuation has also been called into question since it was based on a price-to-book ratio of comparable companies, which only included overseas financial technology firms such as Rocket Companies, TSC Group Holdings and Nordnet AB.

The KakaoBank CEO defended its decision, saying it was difficult to set local financial players as its peer group due to its “distinctive business model,” such as a contactless sales-based operation and its differentiated fundamental and growth potential, unlike ordinary local lenders.