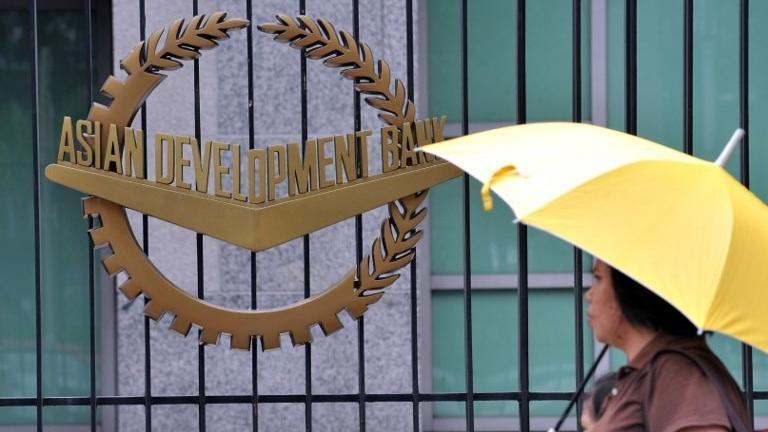 A pedestrian walks past a logo of Asian Development Bank displayed outside its headquarters in Manila. (AFP)

As the South Korean economy faces the impact of the fourth wave of COVID-19, it is also being forecast to expand 4 percent this year due to strong exports and investments, the Asian Development Bank said on July 20, revising up its previous projection of 3.5 percent.

In an updated economic forecast, the regional lender cited “facility investment that reflected expansion in the digital economy,” as well as robust “export of information technology and transport equipment” as key drivers for economic growth. The ADB maintained its 2022 growth forecast for Korea at 3.1 percent, as envisaged in April.

The gross domestic product growth forecast of 4 percent is a brighter economic prospect than what the Organization for Economic Cooperation and Development (3.8 percent) and International Monetary Fund (3.6 percent) had expected.

Late last month, the government raised its forecast by 1 percentage point to 4.2 percent. But new coronavirus cases involving the highly transmissible delta variant have been looming over that picture, causing concerns that the fourth wave of the pandemic may knock its economic recovery off track. Starting from July 12, health authorities raised the social distancing level in Seoul and the surrounding Gyeonggi Province to the highest tier, banning gatherings of three or more people after 6 p.m., automatically shutting down nightlife entertainment businesses.

The new distancing rules and their impact appear not to be factored into the ADB’s new forecasts, which were based on economic conditions as of the end of June.

“The biggest risks to the outlook would be continued COVID-19 outbreaks, driven by new variants and enabled by delayed vaccine rollout, which could once again disrupt mobility and economic activity, stalling recovery,” the ADB said in the report, while downgrading its 2021 GDP growth forecast for 46 developing Asian countries, including South Korea, from 7.3 percent to 7.2 percent.

In a monthly economic report released last week, the Ministry of Economy and Finance said it is too early to revise down its economic growth target of 4.2 percent.

“Recently, the Korean economy has continued to show a sharp increase in employment amid a steady recovery in exports and improvement in domestic consumption, but there is a possibility that uncertainty surrounding domestic demand could grow due to a recent flare-up in COVID-19 cases,” the ministry said.

Contraction in domestic demand will be inevitable, according to Lee In-ho, an economics professor at Seoul National University.

“Even if the current social distancing measure disallowing gatherings of more than three people comes to an end, its impact will be huge and linger for some time,” he said.