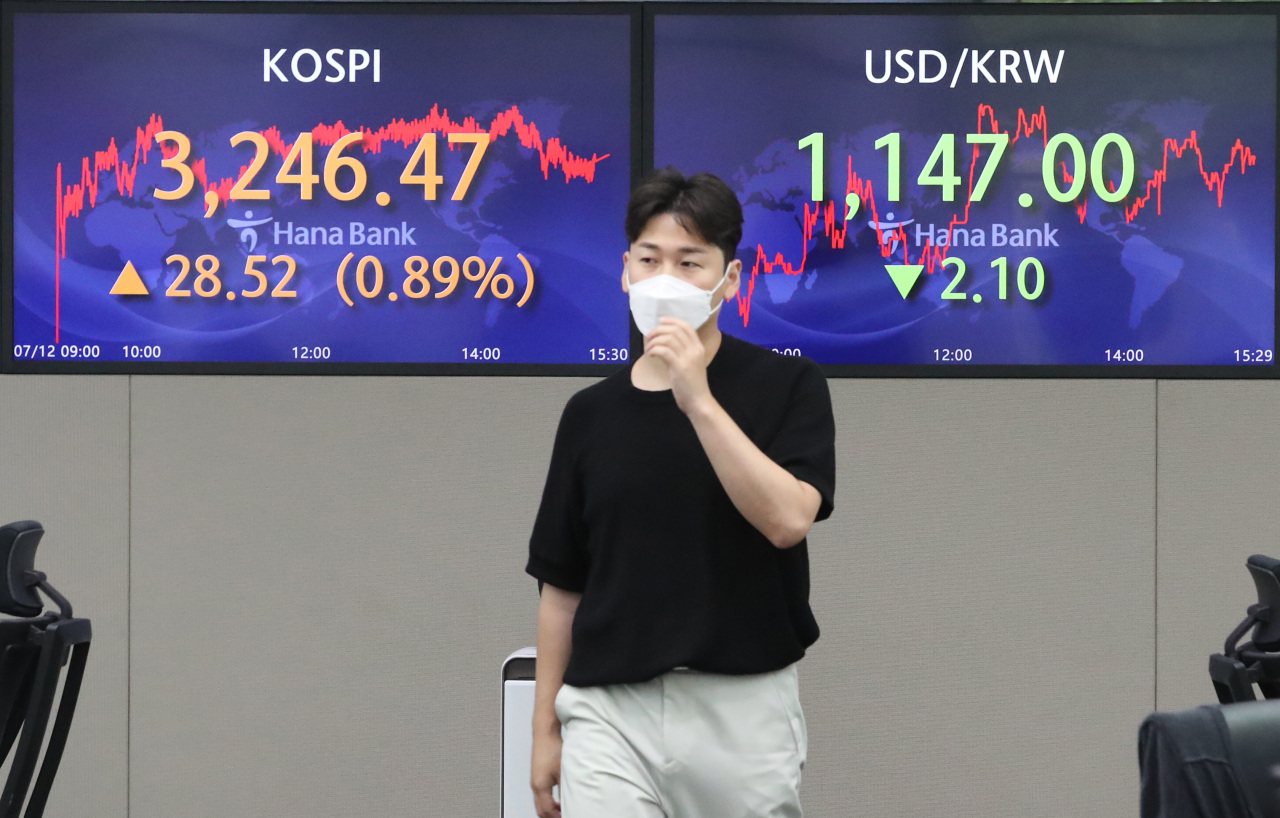 An electronic board at Hana Bank in Seoul shows that the Kospi gained 0.89 percent to close at 3,246.47 points on the day that Level 4 social distancing rules took effect in the Greater Seoul area, Monday. (Yonhap)

Now that the government has placed the Greater Seoul area under Level 4 social distancing rules, the toughest level there is, South Korean stocks are likely to face increased volatility, according to market watchers on July 12.

Despite investor sentiment worsening, they say the impact on the market will be limited amid hopes for strong second-quarter corporate earnings and promising economic indicators. Major brokerage houses foresee the Kospi falling within the range of 3,220 and 3,350 points this week, according to data compiled by The Korea Herald.

Kiwoom Securities analyst Han Ji-young and Hi Investment & Securities analyst Park Sang-hyun predicted that a temporary adjustment could weigh down mostly small- and medium-cap stocks. Market volatility could linger in the short term, they said, referring to past index movements amid new waves of COVID-19 infections across the country.

When the first wave hit the country early last year, the key stock index crashed to the 1,400-point level from the 2,000-point mark in January last year. The index fell 6.69 percent in the second wave during the week of Aug. 13-20, but gained 1.19 percent in the third wave between Dec. 4 and Dec. 23, they said.

Amid escalating virus woes, local experts say a series of upcoming announcements could affect the local stock market this week.

They include the country’s jobless data for June, the results of the Bank of Korea’s next monetary policy meeting, China’s second-quarter gross domestic product, and US consumer price and retail sales data. The quarterly earnings of companies in and out of the country are also to be announced this week.

Experts suggested that the country’s central bank is likely to announce a rate hike as early as next month, since the full reopening of the domestic economy has been delayed by a surging number of confirmed cases.

Kiwoom Securities analyst Kim Yoo-mi and Daishin Securities analyst Moon Nam-joong predicted that the consumer price index for June in the US would most likely rise 4.9 percent, slightly lower than the 5 percent increase posted the previous month.

“If the CPI for June is being announced like our expectation of 4.9 percent, it could ease investor sentiment and stock indexes are also likely to begin upward movements,” Moon said. “On the contrary, the opposite outcome may increase worries about an early tapering.”

When the government announced a stricter level of social distancing on July 9, the Kospi lost 1.07 percent to close at 3,217.95 points. But the main bourse ended its three-day losing streak Monday, thanks to foreigners and institutional investors, who turned to net buyers and hoisted the index.