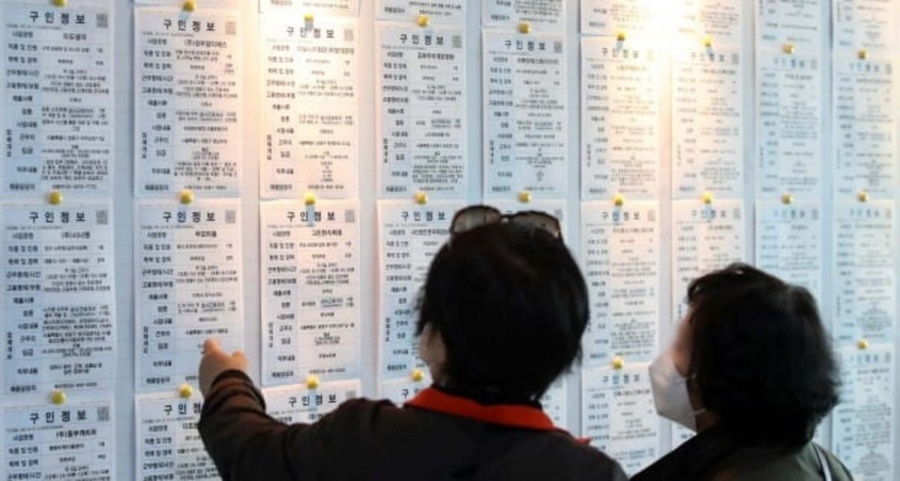 Two women look at a bulletin board advertising jobs in Seoul, on June 29. (Yonhap)

This is the third installment of a series of articles investigating financial activities of seniors during rapid digitalization of the finance industry. -- Ed.

Shin Young-sam, a 59-year-old retiree, remembers days at the office working in a tie and suit -- and the glamorous dinners he hosted with clients and colleagues. Leaving his work last year, he now carries a square-shaped backpack and walks around his neighborhood in Yongin, Gyeonggi Province, for his new job -- picking up lunch from restaurants for on-foot delivery.

“After retiring from my job in May last year, I applied for a part-time deliveryman position named Baemin connector offered by food delivery platform Baedal Minjok on which workers match themselves with store owners to receive delivery requests. Each delivery pays me 4,000 won ($3.50). I usually walk 2 kilometers a day to deliver meals, between 10:30 a.m. and 1:30 p.m., earning up to 40,000 won,” he said.

“Besides interest on my savings, I literally had no money coming into my pocket after retirement. Since I worked as a salaryman for almost 30 years, I felt a bit insecure about my financial preparedness for the future.”

Shin is one of many South Korean baby boomers -- born between 1955 and 1963 ahead of the country’s rapid economic development and democratization -- who retired in their late 50s. Many have been pushed to work again due to post-retirement financial instability.

The number of Baemin connectors in their 50s and 60s, like Shin, for instance, accounted for more than half of 538,000 of all such workers at the platform delivery service company in 2019. Those in their 50s marked 33 percent with 19 percent for those in their 60s, industry data showed.

They have resorted to seeking low-paid temporary or part-time jobs, largely due to a protracted period without an income before reaching their public pension age of 62, a phenomenon known as the “income crevasse.”

According to a survey conducted by Hana Financial Group last year, nearly 38.1 percent of 1,000 retirees aged over 50 living in populous cities across the country, including Greater Seoul and the four major metropolitan cities of Busan, Daegu, Daejeon and Gwangju, said they left office before the age of 54.

Employees who retired between the ages of 55 and 59 accounted for 20.4 percent, while those who retired at 60 or older stood at a mere 7.2 percent. The survey also suggested the average period of income crevasse was 12 years.

Considering the nation’s current public pension age is 62, Korean retirees in their late 50s and early 60s are faced with mounting financial burdens, mainly due to the responsibilities of caring for their children and parents at the same time.

However, retired boomers, who were once the skilled workforce at midsize and large firms across industries, are struggling to find good-quality jobs in the employment market as government-led job creation efforts are mainly focused on the young generation and the elderly aged 65 and above.

For instance, the Ministry of Economy and Finance last week announced its plan to create more than 150,000 new jobs in the public sector by the end of this year through government-funded employment programs, but more than half of the state-backed regular jobs will be offered to young job seekers and senior residents.

Meanwhile, soon after President Moon Jae-in took office in 2017, his administration vowed measures to help senior employees in the private sector to prepare for successful reemployment after retiring from work so that they could maintain financial stability, as part of policy responses to the nation’s fast-aging population.

Among them was the government-initiated bill that stipulates large companies with more than 1,000 employees offer in-house education programs and consulting services aimed at helping retirees get stable jobs in different industries, which was approved in 2019 by the National Assembly.

The bill took effect the following year, but questions were raised over its effectiveness since it does not contain any terms for penalties for companies failing to meet the standards.

On the brink of poverty

If the income crevasse prolongs for the baby boomer generation due to a lack of quality jobs as well as insufficient preretirement financial preparation, it will exacerbate the nation’s chronic poverty among the older generations, experts say.

"Without stable jobs or sufficient liquid financial assets, the chances are high that many retirees belonging to the 5060 generation assets would fall below the poverty line in their old age,” said Lee Seung-yoon, a social welfare professor at Ewha Womans University.

“South Korea copes with rapid population aging at a time of low birthrate and high youth unemployment. The boomers, who are supporters of children struggling with unemployment as well as aging parents, may slip into the poverty trap, especially when an unexpected economic shock like COVID-19 arises.”

Baby boomers reaching the state pension age are also under financial stress because of low returns on pension investments.

According to a report by Statistics Korea, the minimum living cost of retired couples came to an average of 2.91 million won a month, but the old-age pension program operated by the National Pension Service provides merely 540,000 won to retirees in monthly allowances on average, as of August last year.

Introduced in 1988, the old-age pension is a public fund designed to secure the life of an individual financially after retirement, whereby its subscribers pay 9 percent of wages for at least 10 years and draw benefits from the pension at the age of 62. Half, 4.5 percent of the contribution, is covered by the employer.

“Currently, the income replacement rate for the public pension is around 43 percent, below the OECD average of 59 percent. It is true the amount of pension benefits falls short of people’s expectations, but drastically raising the rate of return by collecting more insurance premiums would pose an extra burden not only on laborers but also businesses,” said Han Jong-seok, a researcher at the Korea Institute of Public Finance.

"While operating social safety nets like the current state pension scheme, the public and private sector should put their heads together to support reemployment of the baby boomers in the labor market by recognizing their job issue as a national task.”