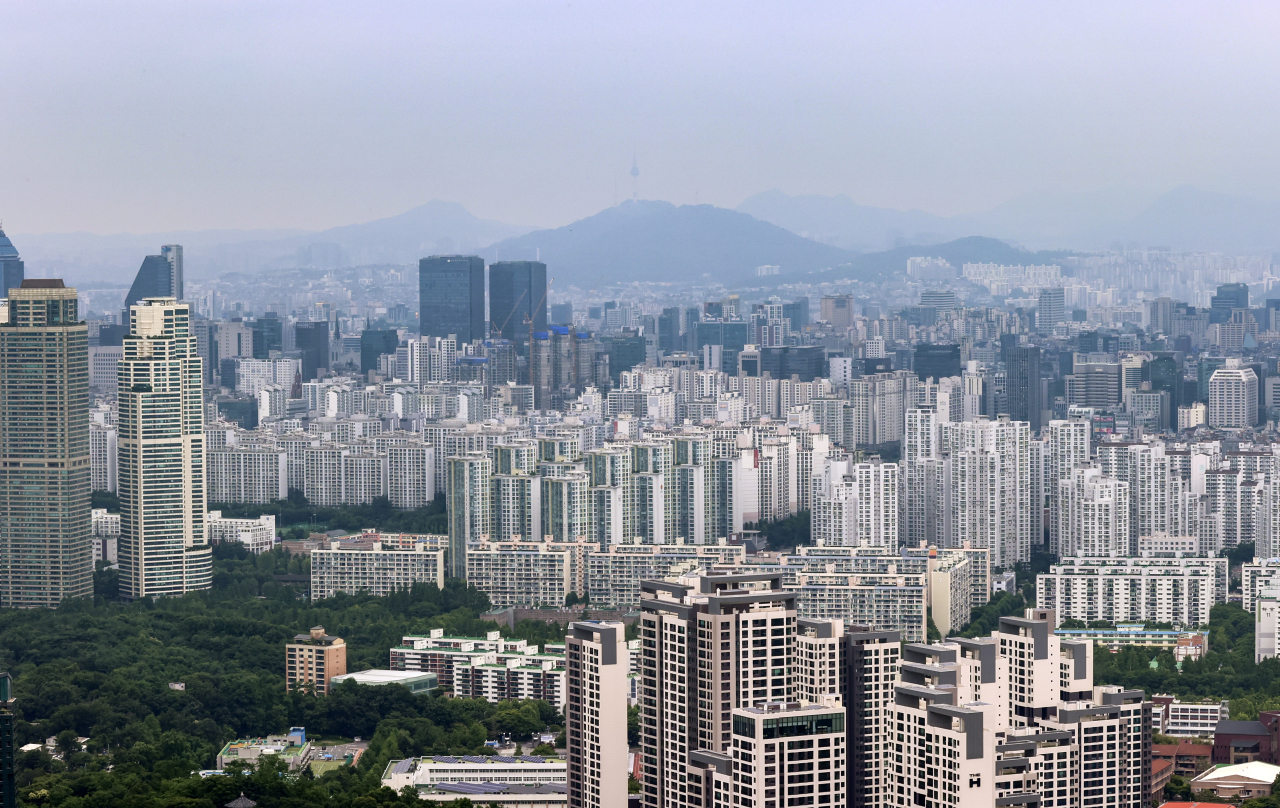 An aerial view of apartment complexes in Seoul. The photo was taken on June 11. (Yonhap)

South Korea will ease mortgage rules for first-time homebuyers starting next month as part of a raft of real estate measures aimed at helping young people move up the property ladder, according to a real estate service provider on June 21.

Applying for a mortgage will become easier for both couples and individuals seeking to purchase a home for the first time, the Zigbang report said.

The bar will be lowered to include properties valued below 800 million won, from the current 500 million won, in areas labeled by the government as price adjustment zones. Properties that fall under this category have seen their price gains jump at more than double the rate of inflation.

In areas deemed “overly speculative” -- mostly Seoul and neighboring areas -- the bar will be lowered to include properties worth below 900 million won, compared with the current 600 million won.

The loan-to-value ratio will also be eased, but banks will be allowed to extend loans of up to 400 million won to each borrower.

On top of the relaxed mortgage rules, 40-year mortgage loans will be introduced in the second half of this year for the first time to allow young buyers aged below 39 and newlyweds to pay relatively low rates over a longer term.

The easing of regulations comes as the government has come under intense public pressure to tame Seoul’s runaway housing prices.

The Moon Jae-in administration has levied heavier real estate taxes on multiple homeowners and tightened loan regulations through more than 20 sets of real estate rules. The rules have so far failed to put a dent in Seoul’s apartment prices. Home prices have shot up nearly 60 percent throughout his presidency since 2017, data showed.

Meanwhile, commercial banks here reportedly plan to reintroduce mortgage products with interest rate caps on the back of a possible interest rate hike. The expected move has sparked concerns about the increased debt burden that households would have to shoulder, should the nation’s central bank increase its benchmark interest rate by the end of the year.

With the economy’s faster-than-expected recovery, driven by rebounding exports and growing signs of inflation, experts have said that the Bank of Korea is likely to carry out an earlier-than-expected rate hike in the second half of the year.