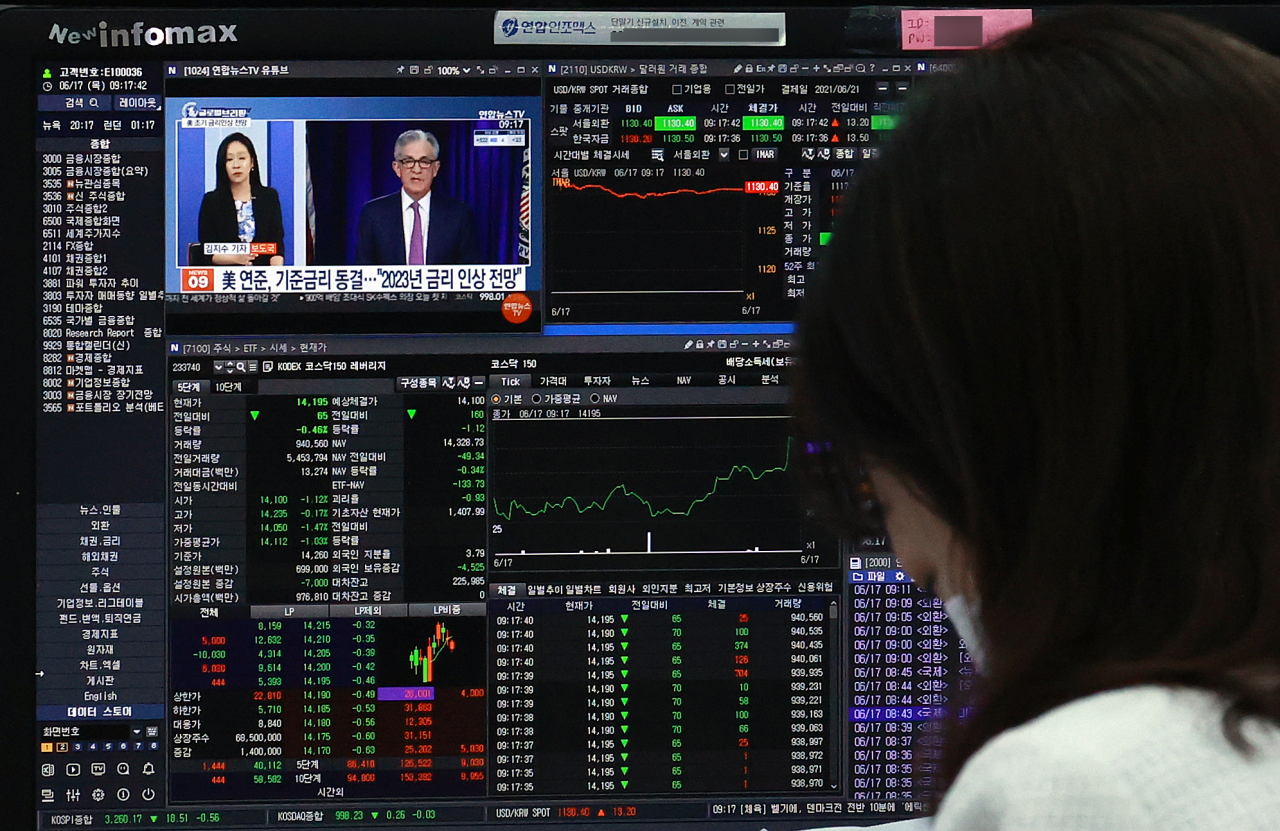 A Hana Bank dealer watches TV reports on the US Fed’s projection of rate hike in 2023 on June 17. (Yonhap)

The Seoul stock market traded bearishly on June 17 after the US Federal Reserve projected rate hikes in 2023, ending a brief winning streak this week on economic and corporate improvements. But upon watching the market drop in response to the Fed’s hawkish stance, South Korean policymakers expressed confidence about dealing with any resulting volatility in the financial market.

First Vice Finance Minister Lee Eog-weon said Asia’s fourth-largest economy may be affected to some extent by indications from the US policymaking Federal Open Market Committee that rate hikes could come as soon as 2023. But the country is capable of handling it thanks to its strong economic fundamentals, Lee said.

“The government has sufficient policy room to cope with (potential market volatility) in times of an emergency situation,” Lee said at a government meeting on the macroeconomic situation.

On June 16, the FOMC unanimously left its benchmark short-term borrowing rate anchored near zero. But officials signaled that rate hikes could come as soon as 2023, after saying in March that they foresaw no increases until at least 2024.

Lee said global rating agencies including Moody’s and S&P had maintained their credit ratings for Korea at high levels due to the economy’s resilience during the COVID-19 pandemic.

He also said the country’s foreign exchange reserves had hit an all-time high of $456.4 billion in May.

“Our capability to respond to market volatility is stronger than ever as the Bank of Korea and the Fed agreed on June 16 to extend their $60 billion currency swap agreement by another three months,” Lee said.

The government will strengthen monitoring of the financial market and take measures to stabilize it if necessary, he added.

Despite the extension of the currency swap, the local currency closed at 1,130.4 won against the US greenback from 1,117.2 won on the prior trading day.

“In preparation for possible changes in asset prices, financial consumers should be on alert over high-risk investments made through excessive borrowing that exceed one’s ability to repay,” said Financial Services Commission Secretary General Kim Tae-hyun during a meeting to examine financial market conditions.

The remarks came amid Seoul’s benchmark Kospi falling under the 3,250-point level in the morning trade. It closed 0.42 percent lower, at 3,264.96 points.

Kospi plunged as both foreigners and institutional investors turned net sellers, after hitting a fresh high during intraday trading in the previous session.

“After checking the July jobs report, the Fed is expected to give a tapering signal in Jackson Hole on Aug. 26. ... We foresee the actual tapering to start from January and end in December next year,” said Huh Jin-wook, an economist at Samsung Securities.

SK Securities analyst Ahn Young-jin projected the Fed’s announcement would come around the September meeting, adding that Powell’s comment hinted that the central bank had already begun discussing tapering. He further predicted the Fed would probably make extra efforts to minimize the impact on markets since it observed the shock from the previous tapering announcement in 2013.

Cryptocurrencies had gained momentum backed by investors’ ample liquidity, but they also traded bearish due to tapering worries.

According to US-based cryptocurrency data provider CoinMarketCap, the largest cryptocurrency, Bitcoin, was trading at $39,228.14 around 4 p.m. here, having shed 3.05 percent within 24 hours.