Kospi hits new high in 5 months ahead of FOMC decision 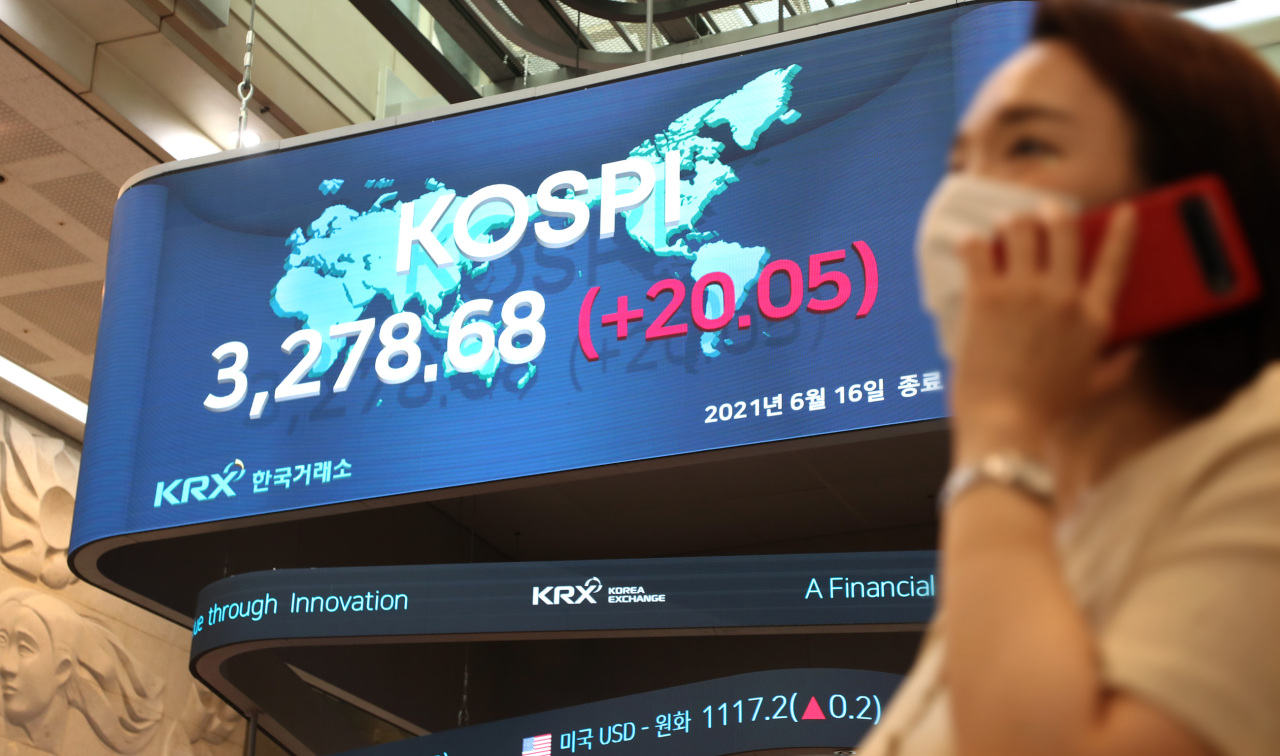 South Korea’s benchmark Kospi hit a fresh high during intraday trading on June 16, with foreign and institutional investors returning to the market ahead of a US Fed meeting that could signal a market moving stance. It extended a winning streak for a whopping fifth session in a row.

The Kospi closed at 3,278.68, replacing an all-time high closing for a third consecutive session. The index once touched as high as 3,281.96 in the morning trade, breaking its previous record high of 3,266.23 set during trading on Jan. 11.

While investors scooped up blue chips from the market, both foreign and institutional investors ended selling sprees and purchased a net 233 billion won ($208.5 million) and 44.3 billion won, respectively, to hoist the index. Retail investors, on the other hand, turned to net sellers.

The tech-heavy Kosdaq rose 0.11 percent to close at 998.49 points. The index once moved in a downward trend in the early morning trade, but suddenly went up to recover to the 1,000-point threshold after first touching four digits on April 29. It reached as high as 1,000.43 in late morning trade.

Small domestic investors extended a buying spree to four sessions, scooping up a net 57.6 billion won. On the contrary, foreign and institutional investors extended net sales for a fourth consecutive session and two days in a row, respectively.

While Seoul stocks rally, market watchers are keeping a close eye on the two-day US Federal Open Market Committee meeting on June 15 and 16 in Washington. They are optimistic about the rise of global stock indexes after the upcoming meeting, while expecting the Kospi could rise as high as 3,700 points in the second half of the year.

“We are foreseeing no direct policy changes to be made from the June FOMC’s meeting,” said Han Ji-young, a strategist at Kiwoom Securities. “However, we suggest investors to still pay attention to possible hints over tapering schedules and the US Fed’s policy changes for the future.”

Daishin Securities market analyst Lee Kyung-min also presented a rosy outlook over the local stock market’s upward momentum in line with a continuous weak dollar against the Korean won, along with improvements in the economy and corporations.

“The undervalued large-cap tech stocks and growth stocks with solid business performance will eventually revive to hitch up the indexes. Especially after the FOMC, the market’s gaining momentum will likely be stronger when checking the downward level of the Fed’s interest rate futures.”

Meanwhile, the local currency traded at 1,117.2 won against the US greenback, down 0.2 won, or 0.02 percent, from the previous session’s close.